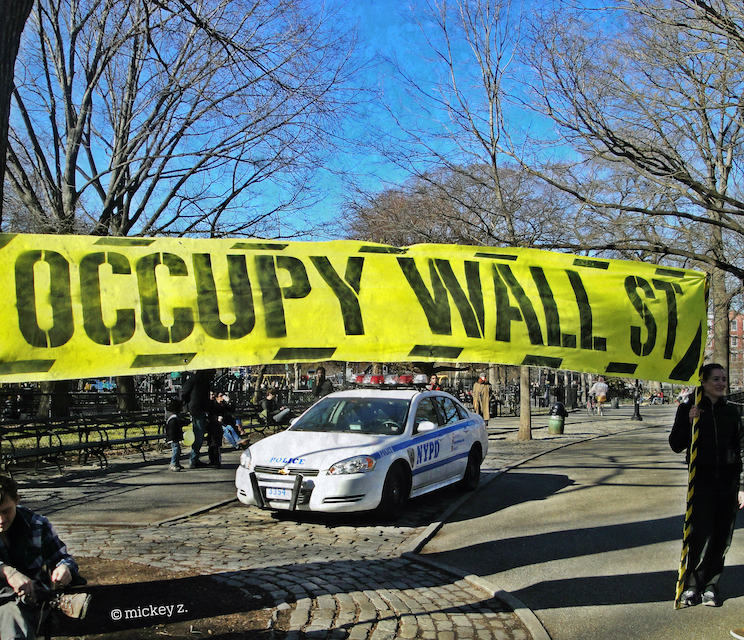 I was training a client on the morning of Sept. 18 when she mentioned she saw something about Occupy Wall Street on the news the night before.

"Yeah, yesterday was the fourth anniversary," I explained.

She did another set of exercises and then asked: "So, what's changed in four years?"

After a long, deep sigh, I replied: "That's a really depressing question."

Choosing not to fall back on privileged platitudes (“Occupy changed the conversation,” etc.), I instead made a sarcastic crack about how so many occupiers are now actively campaigning for a Democratic presidential candidate… and moved on with my client’s workout.

When I got home, I pondered her question more. I contemplated how swiftly and easily the movement was co-opted and how intensely a few diehards were punished. I even looked back at some of the thousands of photos I took during the first year and saw a sea of mostly white faces. I scolded myself for believing this was a revolution.

Then… I did the hard work. The real work. I decided to try honestly answering my client’s question.

Thanks to us not finding a way to halt or slow or even identify the patriarchal, white supremacist capitalist machine, here’s a teeny tiny glimpse at what’s been going on since OWS “changed the conversation” on Sept. 17, 2011:

Since approximately 800 women die from preventable causes related to pregnancy and childbirth every day, that means about 1.2 million have died in the past four years.

Some 2,660 children are born into poverty each day in the Land of Opportunity™. Over the course of four years, that adds up to roughly 3.8 million.

Let’s take that focus on kids to a global level. The United Nations estimates 29,158 children under the age of five die each day from preventable causes. Four years = 42 million.

Please read that again: 42 million children under the age of five have died from preventable causes since the first “mic check” echoed across Zuccotti Park.

While we’re thinking globally, why not consider how the rest of the world might answer my client’s question? What’s changed in four years? More drones and bombs and other humanitarian weapons, more invasions, more occupations, more poverty, more disease, more repression, more rapes, more refugees, more prisons, more dehumanization, more marginalization, more environmental racism, and, of course: much, much, much more profits for transnational corporations, and much, much, much less hope for everyone else.

Also, thanks to Occupy, we’ve been told that the problem is, well… anything from the Federal Reserve to fracking to student debt to NYPD tactics. Outside of a few activists, no one is actually naming the problem. No one is talking about the foundation, the root: patriarchy.

As a result, the past four years have offered no respite for females as a class. Institutional misogyny, rape culture, prostitution, pedophilia, reproductive repression, pornography, conscious erasure, and straight-up femicide remain the norm under phallo-centric rule.

The inevitable outcome of such a male-dominated structure is, of course, ecocide. The all-out assault against our Mother Earth, our landbase, our source of sustenance.

On that note, I’ll offer a few ecosystem-based answers to my client’s query.

Since Sept. 17, 2011: 324 tons of mercury were emitted into the atmosphere for global electric power generation; roughly 5 trillion gallons of untreated sewage, storm water, and industrial waste were discharged into U.S. waters; and the Mississippi River carried 6 million metric tons of nitrogen pollution into the Gulf of Mexico (creating a dead zone the size of New Jersey).

Some 292 million acres of rain forest have been destroyed; 19 billion tons of toxic chemicals and 2 trillion tons of pesticides have been released across the globe; and at least a quarter-million plant and animal species have gone extinct.

(And, since 800 trillion microbeads of plastic enter waste waters every single day -- and that’s just in the U.S. -- I’ll let someone else do the math as to what that adds up to over four years.)

None of our exhibitionist acting out or our Instagram selfies or our clever memes or our accumulation of social media notifications or our sign waving and petition signing and drum banging got us any closer to the root causes and certainly no where near to creating sustainable social change.

What could/should we be doing?

I know plenty of folks will dismiss all this as Mickey Z. being negative again. I’ve heard the “gloom and doom” canard for years, but let’s bring to back to where we started: the gym.

When someone first starts training with me, they’re likely to tell me all about their (unhealthy) lifestyle and ask what I can do to help. If that person has alarmingly high blood pressure or seems to need some kind of medical clearance before training, am I being “negative” by pointing this out?

It might be more upbeat if I complimented them on their outfit or their handwriting but by no measure is it more helpful. Would they want me to “alter the conversation” without giving them any new information or tools? Nope, they came to me so I could name the problem and together, we’d start working on a plan to address it.

"Occupy This Question: What’s Changed in 4 Years?" by Mickey Z. is licensed under a Creative Commons Attribution-ShareAlike 4.0 International License.
Based on a work at https://worldnewstrust.com/occupy-this-question-what-s-changed-in-4-years-mickey-z.