Racist Cops: Only a Symptom of White Supremacy | Mickey Z. 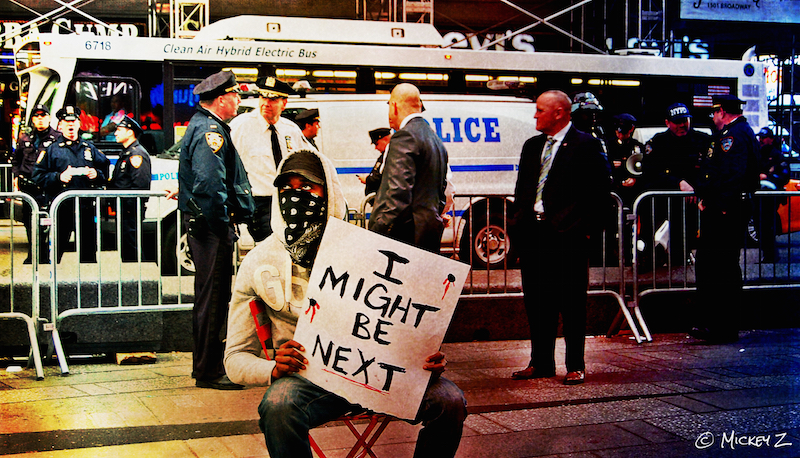 “There is an unbroken line of police violence in the United States that takes us all the way back to the days of slavery, the aftermath of slavery, the development of the Ku Klux Klan. There is so much history of this racist violence that simply to bring one person to justice is not going to disturb the whole racist edifice.”

It appears the murderous and white supremacist behavior of so-called law enforcement agents from Ferguson to New York City to, well, everywhere, may have inadvertently spawned an entire new generation of activists loosely working under the “Black Lives Matter” umbrella.

For anyone striving towards collective liberation and the smashing of hierarchical constructs, this is obviously a very good thing.

However, for those (read: white liberals) seeking only reforms and tweaks that do not challenge their inherent privileges, the myopic focus on racist cops is something to be exploited. For those same moderates wishing to preserve the system, this outburst of outrage is a golden opportunity to deflect a growing movement away from structural analysis.

Fire a police commissioner, form an oversight committee, maybe even indict a cop every couple of years -- none of this qualifies as social justice. So yes, let’s fight back against the unaccountable, heavily-armed mercenaries roaming our streets from coast to coast. But let’s not fall into a common activist trap by allowing ourselves to mistake the Blue Bloc of law enforcement for our primary target.

Choose solidarity, not myopia
One of the more counterproductive yet enduring activist tendencies is to focus way more time and energy challenging cops than challenging the dominant culture those cops are serving and protecting. For this reason, I offer a few more reminders:

So, my fellow white activists, if you really wanna goad cops into arresting you and/or scream “fuck the police!” -- go ahead. Diversity of tactics, and all. But please recognize that such gestures will do virtually nothing to bring about serious, sustainable social change or help lure more folks to activism. Ultimately, I feel these tactics have zero impact on the power and control wielded by the 1% and only serve to alienate non-white activists.

Yes, we must expose Blue Bloc malfeasance and stand in solidarity with those most commonly victimized by police behavior. But if we lose sight of the big picture, well, we’ve seen that show a few thousand times, haven’t we?

Law enforcement tactics are merely symptoms. We must stay more focused on the disease... before we run out of time.

Racist Cops: Only a Symptom of White Supremacy by Mickey Z. is licensed under a Creative Commons Attribution-ShareAlike 4.0 International License.

Based on a work at https://worldnewstrust.com/racist-cops-only-a-symptom-of-white-supremacy-mickey-z.