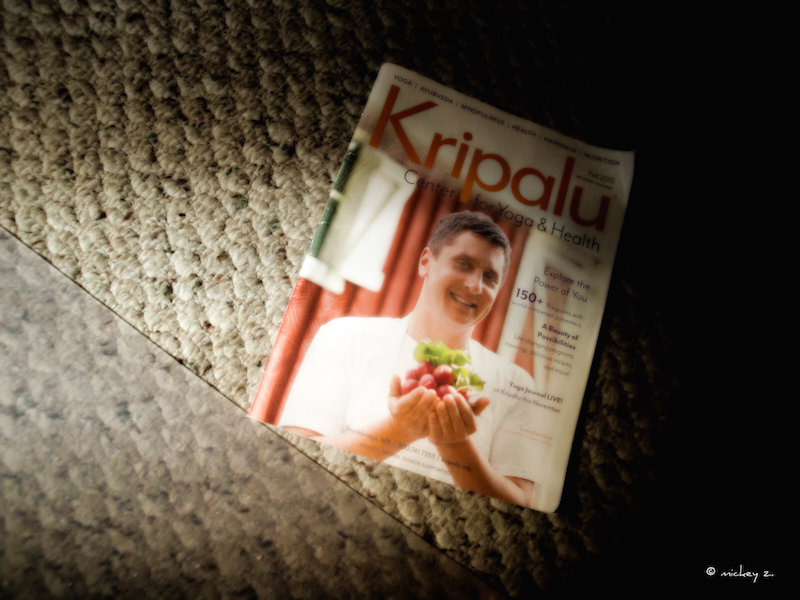 One of the greatest victories of white supremacy is conditioning white people to think it only refers to slavery, segregation, skinheads, and the KKK.

One of the most important steps towards becoming a more aware and effective ally is recognizing how white supremacy (like male supremacy) is everywhere, maliciously interwoven into every aspect of our daily lives. Even those trendy yoga classes.

Of course, with its elitist pricing and resident rapists, yoga does not lack for capitalist and patriarchal elements, but this specific article began when I happened across a white male face smiling at me from the cover of the Kripalu Center for Yoga and Health catalog.

Three pages in, Kripalu CEO, David Lipsius writes: “One of our core beliefs is that personal growth and development is a never a one-size-fits-all endeavor” and “Kripalu celebrates these differences and welcomes all seekers in a way that meets each individual exactly where they are.”

As I thumbed through the catalog on a crowded M train, I decided to see how this commitment to diversity played out. My informal count of the programs offered and how many of the teachers and/or presenters were people of color:

How is this meeting people “exactly where they are”? Which people?

Just being able to get oneself to Kripalu’s location in the Berkshires involves a fair amount of class privilege -- never mind the actual fees and costs of the facility -- but once there, how does roughly 92 percent of the teachers being white not qualify as “a one-size-fits-all endeavor”?

Consider the subliminal conditioning of such numbers. Yoga is created by a non-white culture which is then conquered, occupied, and colonized. Fast forward a few centuries and now rich white people are the “experts” -- sanitizing, commodifying, and selling yoga back to other rich white people as self-improvement.

Self-improvement? It’s long overdue to start thinking beyond our privileged selves and recognizing the reality that white supremacy is not always about overt violence or the use of racial slurs. It is with us, in the most insidious of ways, all the time. Therefore, challenging white supremacy is a 24/7 commitment. Are you up to the task?

If so, I’d like to close by sharing one of the most crucial lessons I’ve ever learned as an activist: The most fundamental white privilege is choosing to remain unaware of white privilege.

Stop posing and join the struggle.

"Yoga’s Pose: White Supremacy" by Mickey Z. is licensed under a Creative Commons Attribution-ShareAlike 4.0 International License.
Based on a work at http://worldnewstrust.com/yoga-s-pose-white-supremacy-mickey-z.