Why does the Left swoon over soldiers? | Mickey Z. 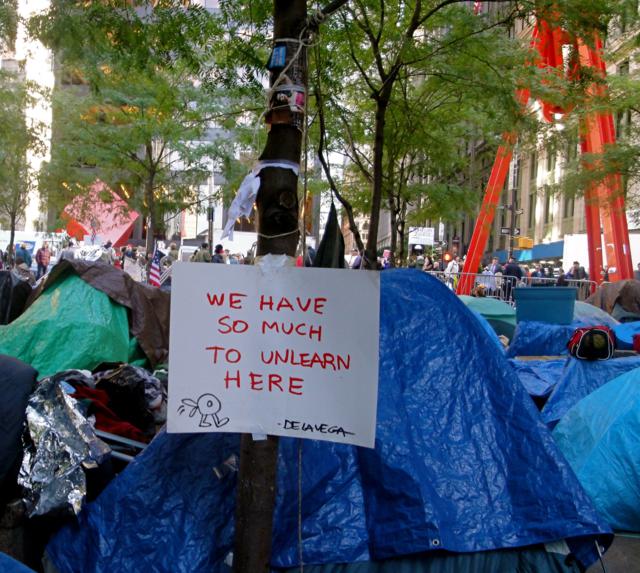 "As a Viet Nam combat vet, I find the young-uns to be really embarrassing when they fawn over us vets, rather than fighting to cut the defense budget."

Presidential election years keep me in perpetual cringe mode, as I witness my comrades buying what the 1% is selling. But it’s not only the two-party tango that makes me wince. An equally frustrating Left Wing disorder is a little something I like to call: The Soldier Swoon.

Symptom A: I’ve heard more than a few liberals and progressives (and even some I consider to be radical) using the term “draft dodger” as a method of attacking Mitt Romney.

Mic Check: As far as I’m concerned, “draft dodging” is the only positive action I could ever credit to Mitt (or to Dubya and Clinton, for that matter).

Why should anyone in the 99% admire Romney more if he participated in the waging of illegal and immoral military interventions?

Which brings me to Symptom B: The mega-amount of outrage displayed by activists/occupiers whenever a U.S. military veteran is arrested while protesting.

While I completely respect anyone recognizing they’ve been duped and thus embarking on a new path, I see no reason why such a person deserves more esteem than any other activist. In fact, call me crazy, but I’m far more impressed by my younger comrades who already see past the American Dream façade -- and didn’t need a walk on the dark side to do so.

Occupiers who (as Bill Perry puts it above) “fawn over” vets merely reinforce this culture’s pervasive, self-destructive, and lethal military fetish.

We can and must do better...

Define “support”
While most American citizens -- even if they identify as “antiwar” -- are manipulated, harassed, coerced, and guilted into hanging yellow ribbons, generation after generation of U.S. military personnel has suffered a distinct lack of support from their own government (and the corporations that fund it). Our (sic) troops are just as controlled and exploited as the U.S. citizens programmed to worship them.

Yellow ribbons, flag-waving, repressive laws, peer pressure, and loud chants of "USA" don’t qualify as support. Rather, this is self-policed obedience orchestrated by a corporate-dominated state.

Here’s something else that doesn’t qualify as “support”: Radical activists being awestruck by the veterans within their ranks.

Veterans -- whether they are activists or not -- don’t need such superficial backing when realities like this exist:

According to the U.S. Department of Veterans Affairs (VA), the number of suicides among people serving in the armed forces has jumped more than 25 percent since 2005. In 2010 alone, 454 service members killed themselves in combat zones.

Life doesn't get easier for those who make it home. About one-third of the adult homeless population is veterans and, according to the VA, is 95 percent male, mostly likely to be: single; hail from an urban area; and suffer from mental illness, alcohol and/or substance abuse, or co-occurring disorders.

People of all ethnicities may sign up to defend (sic) the land of the free (sic) but 56 percent of all homeless vets are African American or Hispanic (despite only accounting for 12.8 percent and 15.4 percent of the U.S. population, respectively).

Yes, you read that correctly: "lack of support networks."

Despite the government’s demonstrated unwillingness to truly support volunteer soldiers, Americans continue to enlist -- and this shouldn’t surprise anyone. We grow up watching war movies and playing with guns. We're surrounded by war memorials and war monuments, and are taught to obey and fear those in uniform. We witness the demonizing of those who oppose war. Our media is overrun with militaristic fervor. Our tax dollars finance war and pro-war propaganda. Our government passes laws designed to thwart dissent.

Even if we remain immune to wartime spin and propaganda -- even if we don't buy into the story that America has been dragged into conflict after conflict and perpetually left with no choice but to wage a humanitarian war against a savage enemy -- we still face the guilt factor of the "support the troops" peer pressure, e.g. no matter what we think or how we feel, once the actual fighting begins, all Americans must unite behind our troops to insure their safety through victory.

Inform the troops
Whether the vets you know were drafted back in the day or more recently volunteered, they need far more tangible support than bumper stickers, campaign slogans, or idealistic hero worship.

In turn, what the entire planet needs is a culture that values dissidents infinitely more than it values mercenaries... and this is where Occupy Wall Street can become even more of a game changer.

From the official Declaration of the Occupation of New York City:

It is precisely because "the nation's wealth" is "wasted on war" that so many Americans actually volunteer to kill in the service of the 1%. The point many seem to be missing is just how deep the socio-economic connections run:

If a more equitable economic climate were created, young Americans would no longer feel compelled to enlist solely for financial reasons (and by doing so, provide manpower for wars of empire). In such a scenario, those who do volunteer could then rightfully be exposed as willing accomplices to U.S. war crimes and maybe we can finally retire all those counterproductive "support the troops" stickers... and get busy with the counter-recruitment.

Occupy Counter-Recruitment: Educate yourself on the realities of US foreign policy and spread the word far and wide -- especially to those young enough to volunteer. If Americans learn the truth and refuse to enlist, the interventions -- and the inevitable atrocities -- will decrease proportionally.

It’s Time to Reinvent Veteran’s Day
“The antiwar movement has been so thoroughly discredited,” says author H. Bruce Franklin in Vietnam and Other American Fantasies. “One would never be able to guess from public discourse that for every American veteran of combat in Vietnam, there must be 20 veterans of the antiwar movement.”

Mic Check: The veterans of the antiwar movement are OUR troops. If you must fawn over someone, these brave individuals deserve it much more than defenders of empire.

Hmm, I smell an idea brewing...

What if we reinvented Veteran’s Day as a way to honor all the activists who fought before us and blazed a path?

"Antiwar" isn't a useful mask to wear at an election season costume party. This label signifies one as being against all war (except class war) no matter which political party has commenced the invasion, the bombing, the sanctions, or the covert operations.

Therefore, the Occupy movement must eschew hero worship and remain guided by a deep-seated antiwar sentiment in order to avoid playing into the hands of the 2012 election game... a game with no long-term winners.

In this way, we can cure both the two-party tango and soldier swoon in one shot.