While You Were Talking About Big Bird... | Mickey Z. 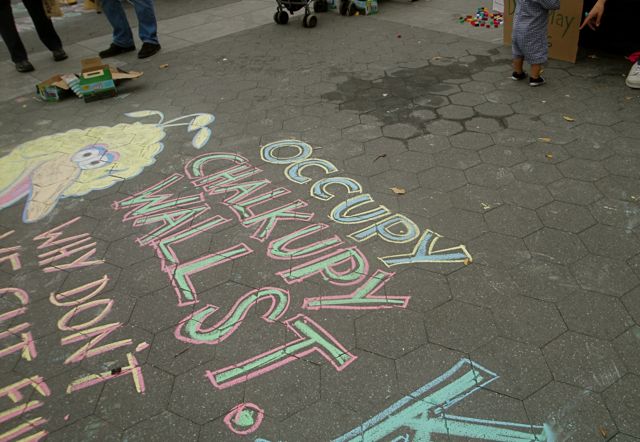 “As we go on with our lives, we tend to forget that the jails and the hospitals and the madhouses and the graveyards are packed.”

I really thought 2012 could be different.

With the advent of Occupy Wall Street (OWS) and a palpable climate of rising radicalism, I allowed myself to believe that this election year, I wouldn’t have to witness so many comrades wilt under the pressure of conforming to the two-party deception.

While some folks have opted to open their eyes and recognize what is hiding in plain sight, as the election nears, I find myself yet again cringing at the spectacle of victims enabling their abusers.

Mic Check: I cannot fuckin’ wait for Nov. 7 so we can all finally get back to focusing on reality.

While you were watching the debate…
"People who shut their eyes to reality simply invite their own destruction, and anyone who insists on remaining in a state of innocence long after that innocence is dead turns himself into a monster."

During the 24 hours after the initial presidential debate (sic)...

...while you dutifully dissected and endlessly evaluated, across the land of the free, 2,660 children were born into poverty, the human prison population grew by 214, and 1,878 women were raped.

...while you cultivated a (false) sense of superiority over Romney voters, across the globe, about 40,000 human beings starved to death and 30,000 children under the age of five died from preventable causes.

...while you rationalized, apologized for, or simply ignored President Kill List’s ever-expanding criminal agenda, 54 percent of your tax dollars continued to be funneled into an international terror enterprise known as the U.S. Department of Defense, a.k.a. the planet’s #1 polluter.

...while you soothed yourself with canards about the Supreme Court and the existence of lesser evils, 200,000 acres of rain forest were destroyed; 150 plant and animal species went extinct; and 13 million tons of toxic chemicals were released across the globe.

Then, of course, we have the meat-based diet -- the biggest bird killer on the planet. For example, every day, 23 million chickens are killed in the United States for food (sic), 269 per second. (P.S. The global animal by-product industry murders tens of billions of animals each year and is the number one source of human-created greenhouse gases.)

For those of you scoring at home, that's billions of birds -- Big and small -- killed by our beloved way of life while we giggle smugly about Mitt’s PBS gaffe.

Inconvenient truth: Voting won’t change any of the above and if it doesn’t change soon, we’re all fucked.

How much time do you think we have?
“Sometimes people hold a core belief that is very strong. When they are presented with evidence that works against that belief, the new evidence cannot be accepted. It would create a feeling that is extremely uncomfortable, called cognitive dissonance. And because it is so important to protect the core belief, they will rationalize, ignore and even deny anything that doesn't fit in with the core belief.”

Billions of dollars are being spent on a charade -- a pageant we call “elections” -- but meanwhile, 90 percent of the large fish in the ocean are still gone and the same can be said for 80 percent of the world's forests.

Every square mile of ocean still hosts 46,000 pieces of floating plastic. The planet's leading cause of human death and illness is still diarrhea and 88 percent of these deaths are still directly linked to a lack of access to safe water.

Seventy-five percent of the original U.S. topsoil has already been lost. Each year, Americans use 2.2 billion pounds of pesticides. Every second, 10,000 gallons of gasoline are burned in the United States.

Every year, 1.2 trillion gallons of untreated sewage, storm water, and industrial waste are discharged into U.S. waters and 40 percent of rivers and 46 percent of lakes are too polluted to support aquatic life.

The fracked gas, the tar sands extraction, the ocean acidification, the deforestation, the desertification, the nuclear waste, the mountaintop mining; the USA PATRIOT Act, the AETA, the NDAA -- none of this (and so much more; I could go on for days) is addressed when we focus on voting for either wing of the single corporate party.

Check that, none of this is even fuckin’ acknowledged.

We’re too busy breaking down the body language and sound bites of two Wall Street-funded figureheads to hear the desperate cries for help echoing from every corner of the globe.

Clean the electoral gunk from your ears…

Silence your cell phones, your TVs, silence that voice in your head, the one telling you we still have time... and just listen. Listen carefully. Can you hear it?

It's a cry from the future, a mournful plea begging us to capture this moment. Can you hear it? Will you hear it? Or have you gotten so accustomed to losing that you choose instead to cover your ears, bury your head, and find endless excuses and myriad methods to stay the course?

I promise you this: The human beings (and all living things) that come after us won’t give a shit who you voted for in 2012... if they have no clean air to breathe, no clean water to use, and are stuck living in a toxic, virtually uninhabitable police state.

Mic Check: The U.S. electoral system is intrinsically disconnected from the real world, the natural world.

If you still actually believe your vote matters and you really want to spend one hour of your life on Tuesday, Nov. 6 expressing that belief, so be it. Go ahead and participate in the fraud but know this:

But afterwards, regardless of what you do on Nov. 6, we must all put the democratic delusions behind us and return to the momentum that was building and the fight that must be won -- regardless of which CEO of empire sits in the White House for the next four years.

So, listen again. Listen closer. What you’ll hear is nothing less than a call to global revolution. How will you answer?