That time I saw people reading my newspaper column on the NYC subway | Mickey Z. 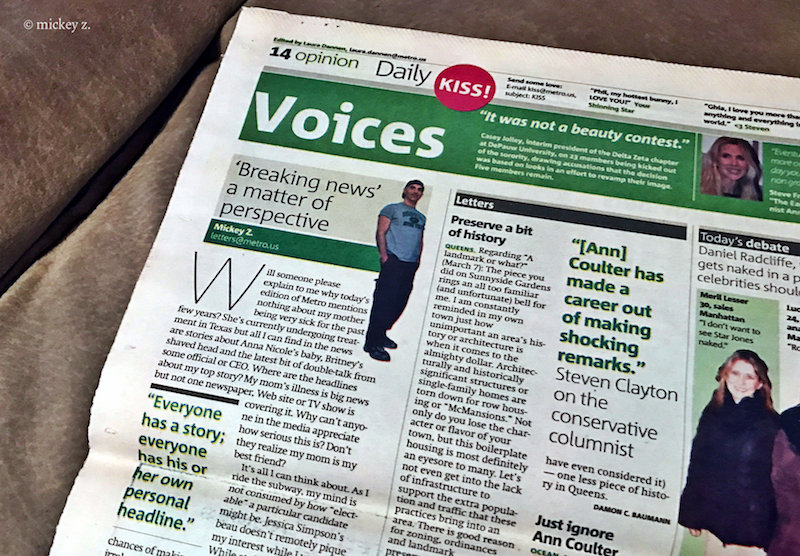 “I urge you to please notice when you are happy, and exclaim or murmur or think at some point, ‘If this isn't nice, I don't know what is’.” (Kurt Vonnegut)

I admire the skill needed to fashion a truly clever tweet and I’m a fan of punny memes, but… (you knew there had to be a but) I’m quite grateful I came of age in a time when newspaper columnists were legit NYC icons. I’d ride the subway with my tabloid-sized New York Daily News and/or New York Post -- turning pages until I’d see the familiar face of a Jimmy Breslin or (my favorite) Pete Hamill. Even when flipped to the sports section, you'd find reliable regulars like Dick Young, Mike Lupica, and Peter Vecsey.

Believe it or not, folks once waited for days to read what their preferred pundit had to say about the latest news (“latest news” lasting far more than an hour, btw). And it was not that long ago…

Of course, I can look back now and cringe at the mansplainy white dudes who ruled the columnist culture but that’s for another article. For now, I just wanna simply acknowledge a lost art: memorizing which days featured which columnists and making sure you never missed the chance to hold a newspaper in your ink-stained hands as you navigated the Big Apple’s subterranean tunnels of transportation.

Even before I was going to jobs in the city (anyone living outside of Manhattan calls Manhattan “the city”), it was not unusual for me to cut a high school class and spend that period in the school cafeteria, perusing the dailies. I knew by then I’d become (or already was) a writer and I allowed myself to set the lofty goal of penning newspaper columns that others would read while riding the subway.

Alas, I had no inkling of a looming Internet or disposable clickbait articles being skimmed on smartphones or writing being downsized to fit 280 characters. Thus, the pursuit of my newspaper columnist goal became a lengthy saga -- in three acts.

Despite the many ups and downs of my “career” and all the ensuing technological “progress,” I did hit paydirt in the mid-2000s. It wasn’t the News or Post or even Newsday (although I did write a few freelance pieces for all of them in the 1990s) and it wasn’t as if any of my fellow Gotham denizens were waiting around to hear what Mickey Z. had to say. But, this happened:

Metro New York emerged as a slim and popular daily newspaper -- given out free at most subway stations. They didn’t hire regular columnists; they out-sourced such work. I was still deep into my writing hustle back then so I began submitting essays. More than a few of these were published and I got paid. Hence, when the editors of Metro decided to run photos of their regular columnists, I was thrilled to be asked to visit the newsroom for a shoot.

Being me, I showed up in cargo pants, a backwards Yankee cap, and a t-shirt that read: “Dumpster Diving Team.” The staff was smitten and insisted on taking a full body photo. The trick now was the wait. Metro never told me in advance when they’d run something of mine so I had to check the paper each morning.

Within two weeks, one of my columns ran with my photo and a major part of my goal had been attained! As someone who obviously appreciated when newspaper columnists held sway in my hometown, it was pretty damn cool to have my decidedly non-mainstream perspective -- and my decidedly non-mainstream photo -- displayed for millions of commuters to peruse during their morning ride to work or school.

During this time, I had a few affluent personal training clients scattered throughout Manhattan. To the best of my knowledge, none of them ever saw my columns or photo (probably because most of them didn’t ride the subway) but that doesn’t mean my double life went completely unnoticed.

Three of my clients back then were high-powered lawyers whom I trained at their high-powered law firm’s gym. This arrangement required me to check in with the doorman… or was he a concierge? (It’s funny to me that I might insult a concierge by calling him a doorman.) Anyway, doormen typically display one of three basic behavior patterns towards personal trainers.

The first and most common is indifference (we’re used to that). Secondly, they relate to us as fellow blue collar folk saddled with the same fate: serving the well-heeled. Lastly, in a futile attempt to align themselves with a winner, some doormen openly look down their noses at us. This was definitely the case at the law firm until a certain concierge happened across my handsome face staring back him from the pages of Metro.

The guy was completely flabbergasted when he read a little something of mine called “Re-Examining Rumsfeld’s Ratio” (which talked about, among other things, the U.S. unselfconsciously using "Apache" helicopters to quell "ethnic cleansing"). A hardcore political junkie, the concierge now imagined me to be an “expert” and fell all over himself to shake my hand and introduce himself.

My new best friend could not get enough of me and it became the new norm for him to quiz me about current events before and after my training sessions. One morning, as I was passing through the lobby, he called me over and pulled out a legal pad. Believe it or not, he had written a page or two of notes to remember all the things he wanted to ask me! Yeah, just another tricky day in the life of a muscular militant. (Note: I still get e-mails from this dude.)

The days of Metro paying edgy freelancers did not last forever (or even two years). But, before the ride was over, I got one last movie climax moment. One morning, on my way to the city, I squeezed into a particularly crowded N train and positioned myself where I could hold onto the overhead railing.

After a beat, I looked down at the person sitting in front of me. He was holding a copy of Metro on his lap, open to the opinion page, and there I was! Glancing to my left, I looked over the shoulder of the passenger next to me. She had Metro strategically folded in such a way as to read my column!

New Yorkers were holding a newspaper in their ink-stained hands as they navigated New York’s subterranean tunnels of transportation. And they were reading a column by (drum roll, please) Mickey Z.

With a nod to Mr. Vonnegut, I smiled and thought: “If this isn't nice, I don't know what is.”

That time I saw people reading my newspaper column on the NYC subway by Mickey Z. is licensed under a Creative Commons Attribution-ShareAlike 4.0 International License.
Based on a work at https://worldnewstrust.com/that-time-i-saw-people-reading-my-newspaper-column-on-the-nyc-subway-mickey-z.