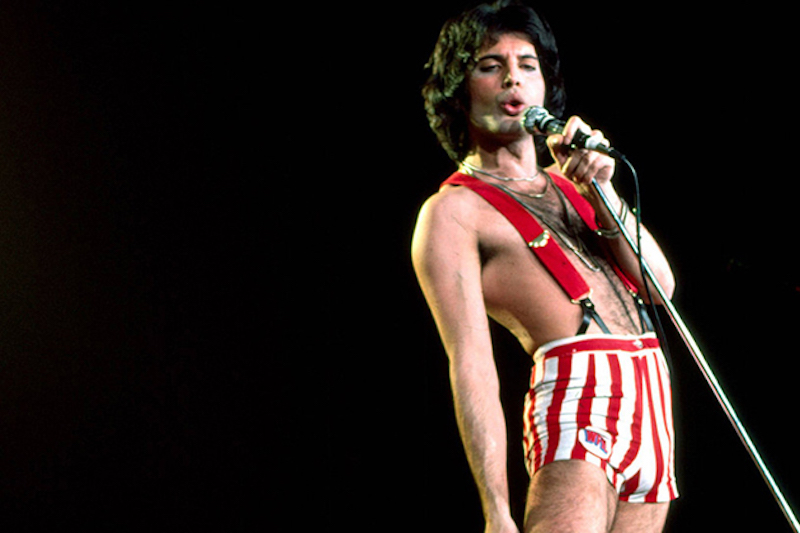 I was a precocious concert-goer, what can I say?

Scoring 15th row tickets for $7.50 to see Queen at New York City’s Beacon Theater before they became international superstars was basically par-for-the-course in my young life. And witnessing Freddie Mercury in action, in his prime, was easily one of my all-time best entertainment experiences.

A Night at the Opera had just been released so I’d purchased my copy along with their previous album (Sheer Heart Attack), listened to ‘em non-stop, and immersed myself in the show (maybe the youngest person in the audience?). By the end of that NYC winter night, I was hooked. A Queen fan for life. (The encore -- Freddie in nothing but suspenders and American flag hot pants, singing “Big Spender” -- is forever etched into my memory.)

What happened the next day, however, was so 20th century, it’s long overdue I write about it.

“Record Department”
As impossible as it may be to conceive of today, at the Beacon show, they announced that Queen would be “signing albums” the following afternoon at Korvette’s. Please allow me to explain: An “album” was a 33 rpm... oh, you know that already? Moving right along…

At Manhattan’s Herald Square still stands the venerable Macy’s department store. Its rival for decades was the now-defunct Gimbel’s (where I worked as a stock boy in my teens). The step-child in this department store epicenter was Korvette’s. All three of ‘em were like Amazon… in real life. They carried virtually everything -- broken down into (of course) departments, e.g. sporting goods, books, musical instruments, televisions, furniture, clothes, and of course, a “record department.”

At noon, the day after a major NYC concert, Queen’s public relations team astonishingly booked the band members to sit, pen in hand, at a plain folding table to meet and greet their drooling fans. When I arrived, there was a reasonably long line but nothing too frenetic. When trying to imagine such a scenario today, I see visions of folks camping out all night before turning the whole thing into an exhibitionist sideshow -- complete with livestreams, Snapchat, Instagram selfies, trending hashtags, and worse. At Korvette’s that Saturday afternoon, I barely recall any cameras at all. Yep, we Queen fans were very much living in the friggin’ moment. Somewhere, Buddha was grinning. The band, however, was not.

Knowing what I do now about Freddie’s notorious propensity for partying, I can only retroactively assume the man hadn’t even come close to sleeping yet. But there he was, wearing shades of course, pretending to be thrilled by the sight of aggressive New Yorkers jostling for position on a line in front of him.

And there I was, excitedly inching ever closer.

At some point, Freddie took off his sunglasses -- causing a stir -- so when I finally reached him, I could see his eyes. I knew I'd only have a minute, tops, so I ignored the other band members (sorry, guys) and went directly to the lead singer. I handed Freddie my newly purchased copies of Queen and Queen II.

Prior to that, he’d been somewhat robotically singing copies of A Night at the Opera, barely looking up. When he saw my selections, he gazed up to see the long-haired child smiling at him.

“I was at your show last night,” I blurted. “It was the best concert I’ve ever seen (breathless pause) and now I have all your albums!”

He signed one of the albums (sorry, I don’t recall which), all the while looking at me with a hint of amusement. “Well, thank you,” he said with a subtle smirk. I stuck out my hand and amazingly, he gently shook it! A Korvette’s employee moved me along but I didn’t mind at all.

Postscript: After meeting Freddie, I strolled out of Korvette’s and immediately went across the street to Madison Square Garden, where I was meeting a friend up in the blue seats for a Knicks-Celtics game. (Conversely, I remember virtually nothing about that game.) About five or six years after my orbit around Mercury, I traded my signed Queen album to a friend for an exercise bike. But hey, by then you could barely see the autograph anymore.

That time I met Freddie Mercury (nbd) by Mickey Z. is licensed under a Creative Commons Attribution-ShareAlike 4.0 International License.
Based on a work at http://worldnewstrust.com/that-time-i-met-freddie-mercury-nbd-mickey-z.