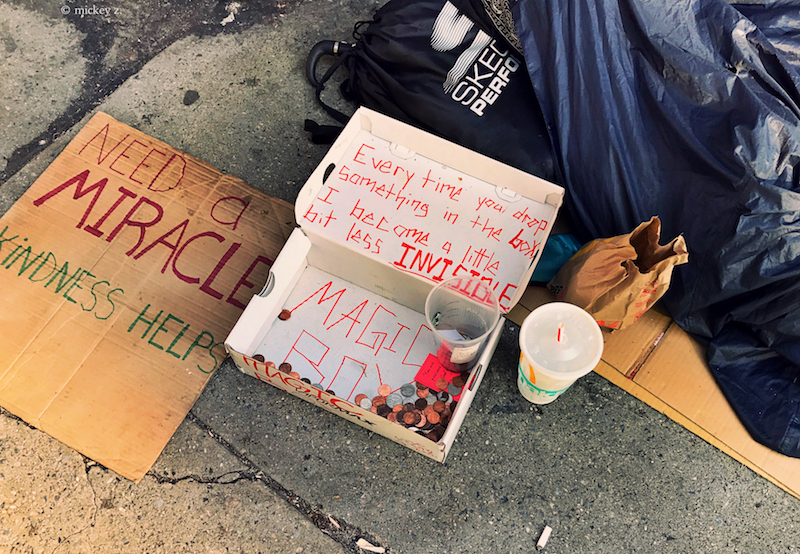 For years, I wrote for Street News -- a once-popular advocacy newspaper mostly produced and sold by homeless people in New York City. I’ve spoken at rallies in support of homeless people from coast to coast. Mostly, I never left my house without a pocket full of change to give out a little something to every homeless person I encountered -- always making eye contact and wishing them luck.

Knowing what I now know, I’d give myself a grade of C (at best) for those efforts. That “C” could stand for “comfortable” as my gestures rarely took me out of my comfort zone.

In late 2016, I began a project called Helping Homeless Women - NYC and that’s when I became the student and homeless women my willing teachers. I still have a long way to go but I’d like to share some of my lessons along the way:

Why homeless women? Why did you go from being a non-stop, high-profile activist to this one-man, direct action mission?

Now, I’ve chosen to directly ask the most oppressed group in the world -- women -- what they want and need and how I can help. And then I do my best to deliver.

I can’t end poverty. I can’t end patriarchy. But I can make a small difference in the daily lives of some of the most fierce and amazing women you’ll ever meet. I’ve never felt more useful or more motivated.

Why did you start your own program?

Let me first say, I'm using my own program as an example here not because it's perfect. Obviously, it's not and never will be. But it is the only project I can speak about with authority and experience.

That said, I’ll ask you to consider how common and relatively easy it is to find an established project and volunteer for a day. A far, far bigger -- and more meaningful -- commitment is to start your own program. As I just said above, it doesn't have to be for the homeless, of course. You might write letters to and visit prisoners. Or perhaps you bring toys to children stuck inside domestic violence shelters. You could feed all the stray cats in your neighborhood on a daily basis.

Ask yourself: What lights you up? What keeps you up at night? Where does your deepest passion lie? What unique gifts and skills do you possess?

What does it mean to “go out of your comfort zone” to help homeless women?

Here’s a good example: B is homeless. She lives in a medical shelter since she lost both legs in a subway accident. We’ve become friends thanks to my project. When panhandling in her wheelchair, B has had people (mostly men) loudly demand she “get a job” and accuse her of just wanting drug money, while others try to steal her donation can. Yet I’ve also witnessed a few folks who not only give but give without ego and with compassion.

One day, a woman asked B if she’d like a meal from a nearby food truck. B said she wasn’t familiar with the menu. The woman promptly went around the corner and photographed the menu. When she returned, B was able to pick out the exact food she wanted. The woman waited on line, ordered the meal, paid for it, and handed the bag to B.

Yeah, it took longer than dropping a coin or two into B’s cup. It was more work than handing off your unwanted doggie bag. But that woman demonstrated what giving can and should look like. I took note.

How might you suggest offering non-monetary help to a homeless woman?

Ask first. It may help you feel good to spontaneously hand over your doggie bag but it’s one-tenth of the meal you just ate -- indoors, being served in a restaurant, probably surrounded by friends. That food will likely sit in your fridge before being tossed in a couple of days anyway. Plus, you don't even know if she likes that kind of food or has allergies or religious restrictions. Sure, it’s kinda-sorta “better than nothing” but let’s aim to be WAY better than nothing!

Ask the woman if she’s hungry. If she says no, ask if there’s something else besides food you can buy for her right now. If she is hungry, ask her what she specifically wants/likes to eat. Then go buy it: a fresh, full meal specified to her needs and preferences.

What if she’s not hungry? Where do I start with giving non-food donations?

Don’t make general assumptions. Coat drives and “blessing bags” are nice but they often soothe our guilt more than serving any homeless woman’s needs. How many coats does any one person need?

Going to a store to buy far more urgent items like underwear and socks instead is more work and more expensive than handing over a jacket you never wear but if that’s what she requests, it’s the right thing to do. So again, ask first and go from there.

What kind of non-food items do you regularly give out?

The list would be too long but a few possible surprises: I’ve given out far more nail clippers and Q-tips than coats. Way more underwear than blankets. And don’t get me started on hand and toe warmers, pads, tampons, and reading material!

I can’t always give something. How else can I show support?

You can still smile, nod, or do something (nice) to remove the veil of invisibility. Paying attention to a homeless woman (or anyone) is a priceless gift. To borrow from Mary Oliver, “To pay attention, this is our endless and proper work.”

By paying attention over the past 16 months, I've heard incredible stories and shared moments I never would've had the opportunity to share. I've comforted a woman who still blames herself for the death of her child many years ago. I've defended women against harassers on the street. I’ve shared uproarious laughter and tears of utter despair.

I've been told over and over again some version of this: “It's just so nice to know someone is out there thinking about me.” I’ve given birthday hugs, gotten to know non-human companions, and protected belongings when women needed to find a bathroom.

I’m glad you mentioned this. Many (most?) homeless women are victims of domestic abuse and/or sexual violence. They are living on the street or in a shelter and have become even more vulnerable. Don’t expect effusive displays of gratitude or long conversations. This may happen but the goal isn’t to boost our egos. We’re here to help and not set parameters on how that help must be accepted (or accepted at all).

I’ve been ignored and shooed away by some homeless women. In other instances, my efforts elicit a quick “thank you” and zero eye contact. I do not take this personally or allow it to color my future interactions with such women. I can never understand their struggle so my aim is to be useful… not praised.

I’m afraid some homeless women will use my money on drugs.

I have a HUGE request: Keep those assumptions to yourself. There is absolutely no need to loudly verbalize that you think a homeless woman has a substance abuse problem. If it’s true, your comment will change nothing. If it’s not true, you’re basically kicking someone while they’re down. As one homeless woman told me: “Do people think their insults will help me in any way? I’m at the lowest point of my life. Comments like that only make me feel worse.”

On a related note, I can report that when I watch a homeless woman’s belongings while she finds a bathroom, passersby often assume I’m homeless. It’s quite educational to watch the people passing and how they react. And yes, I have had a few sneers and wisecracks aimed at me.

Suggestion: Refrain from voicing your negative opinions to a homeless woman and instead, find another way to use your skills and resources to help other humans or non-humans in need.

Doesn’t it ever get to you to be around such misery and despair all the time?

Of course, it does. Let me tell you about J. She’s Latina and probably in her 60s. I used to find her on subway platform benches -- sitting alone, listening to her old school transistor radio. She speaks roughly 75 percent Spanish/25 percent English. I understand (on a good day) 10 percent Spanish/90 percent English -- but we managed to become friends. I got her some over-the-counter meds, learned how she liked her coffee and looked forward to seeing her smile whenever I approached.

One day, she was so happy to see me, she had me lean closer so she could touch the top of my head as if giving me a blessing. A few seconds later, I was grateful to have worn my trademark bandanna because I could see she had a bad skin condition. Her right foot was elevated and the skin on her calf/shin looked mighty angry. J also showed me what looked like hives all across her chest.

I asked her what she wanted me to do and she replied in mostly Spanish. I had to keep asking her to clarify. I could see the palpable frustration on her face and hear the genuine exasperation in her voice. And why not? How often she must have prayed for divine intervention. But some practical joker of a Supreme Being sent her an inept middle-aged white guy. Her eyes silently exclaimed: “Really, God? This guy seems sincere but, seriously?”

After some back and forth, I ascertained that J needed some clean shirts and a new supply of cortisone cream. I knew I’d get both to her ASAP but… my eyes welled up as I walked away, pondering her vulnerability and my limitations.

Eventually, I stopped seeing J because I couldn’t find her anymore. I was distraught but this often happens and has taught me to cultivate a hospice nurse-style mentality. It’s the only way I can keep going. Well, that and the times when one of the women gets housing and finds her way off the street!

But you still feel starting your own program is a better option than volunteering somewhere?

By creating your own program, you have no choice but to do most or all of the physical and emotional labor yourself. The fundraising, bookkeeping, everything is your responsibility. This reality forces you to commit, to hold yourself accountable, to inhabit this project 24 hours a day, and to keep going even during those times when you just don't feel like it. Yes, that happens. It’s not weakness to get tired or to need a break. Self-care is crucial. But when you are the sole driving force behind a mission, you will not allow yourself to waver.

How to (really) Help Homeless Women by Mickey Z. is licensed under a Creative Commons Attribution-ShareAlike 4.0 International License.
Based on a work at http://worldnewstrust.com/how-to-really-help-homeless-women-mickey-z.