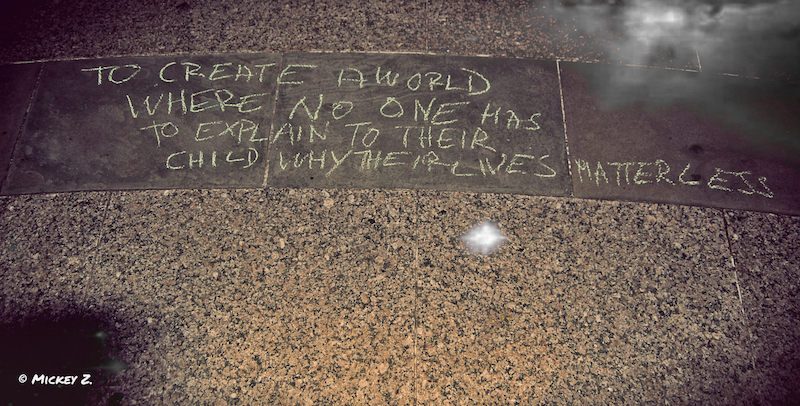 An Interview with A. Breeze Harper

"If vegans who aren't Black want to show support, they first need to understand that race matters.”

The night after it was announced that Darren Wilson would not be indicted for murdering Mike Brown, I attended a #BlackLivesMatter (BLM) rally at NYC's Union Square Park.

Nearby, a group of local animal rights activists were holding a protest that'd been scheduled weeks in advance. I couldn't help but imagine how powerful it'd be if those vegans ditched their plans for one night and, instead, unambiguously joined the BLM March and made new connections.

Without some major changes, veganism and animal rights will never be taken seriously nor will these groups reach beyond their current homogenous and negligible demographic. If you’d like to win over a few more humans to any given cause, I believe it usually helps to demonstrate to them that you care -- even a tiny bit -- about the issues that impact them. Without such growth and diversity, we are doomed, the non-human animals are doomed, the ecosystem is doomed.

To help address such urgent issues, I reached out to A. Breeze Harper, PhD, the editor of Sistah Vegan: Black Female Vegans Speak On Food, Identity, Health, and Society, a “groundbreaking anthology that examined how race and gender shape the vegan experience” in the United States.

Coming up on April 24-25, 2015, Dr. Harper will offer the Sistah Vegan Project’s Vegan Praxis of Black Lives Matter online web conference (more info in our conversation below). Through this crucial event and throughout all her work, Harper focuses on “food and social justice, veganism and vegan health activism (particularly among women of color), alternative health philosophies, feminism, post-colonialism, environmentalism, critical race theory, queerness, gender, sexuality and heterosexism, animal rights, classism, and their intersectionality.”

In other words, Breeze is the antithesis of “single issue.”  She and I had a recent conversation and it went a little something like this…

Mickey Z.: What might you have said to the activists in the situation I described above?

A. Breeze Harper: Well, it depends. If the group of vegans has been planning a protest for weeks, I can understand why they wouldn't want to ditch their plans and the do the BLM protesting. There are many other ways to show support for BLM than going out into the streets to join the march (though I do find this very effective as well).

MZ: Fair enough. How might you suggest they get started? How does one accessibly explain the intersection of veganism and BLM?

Breeze: I think a good first step in supporting BLM is to first visit the Black Lives Matter website and understand that is comes from a Black feminist queer foundation. Reading the website is helpful, as I have met many vegans online, who have never even read the website but claim that they know what BLM is all about and/or do not support it by making the claim "All Lives Matter" or "Everyone matters." This claim is a racist micro-aggression and silences the specific socio-historical context of being "Black" in a USA that currently is founded upon systemic anti-black racism and white supremacist capitalist ways of thinking.

If vegans (who aren't Black) want to show support, they first need to understand that "race matters" (as Cornel West would say) and that being racialized as "Black," being forced into ante-bellum slavery, surviving through Jim Crow, etc has real concrete consequences for the collectivity of Black people in the USA that are very different than the suffering and subjugation that all people may experience.

MZ: How would you explain the fusion of BLM and vegan praxis?

Breeze: I can give you a concrete example: Black communities are negatively affected by gentrification. And in the SF Bay area, where I live, the rise of Silicon Valley wealth has meant more and more gentrification in working class and/or economically struggling communities such as Black communities in Oakland. Those benefiting the most from Silicon Valley are white people. A way to think about BLM and veganism could be to ask yourself if a new vegan restaurant or store that has been created within this gentrified space, was it at the expense of not caring about the Black communities that were displaced (because they can no longer live in the community that has been gentrified)?

MZ: I’ve also heard you discuss vegan chocolate within this context. What can we learn from that example?

Breeze: A lot of vegans love vegan cocoa products but a significant number do not care about the sourcing of ingredients past "was a non-human animal harmed." Lauren Ornelas, director of Food Empowerment Project, has been educating consumers for years about the child slavery involved in cocoa products from the Ivory Coast (and other places). During many of her talks, she explains that a lot of, and mostly white vegans, when confronted with the fact that their favorite vegan chocolate bar has child-slavery sourced cocoa from Ivory Coast, they literally say they don't care. For me, that is a huge statement: "BLACK [AFRICAN] LIVES DON'T MATTER."

MZ: In your view, how does one develop a vegan praxis in which one can enjoy eating vegan food and have the consciousness that Black Lives Matter?

"At what expense of Black communities did this new vegan restaurant in a gentrified part of (type in city area with Black community) come about?"

"At what expense did my cocoa come at the cost of Black African children who are enslaved to harvest the world's cocoa because in a world of globalized racist-capitalist system? Black lives can't matter if the CEOs of corporations (the 1% who conveniently are nearly all white) want to profit from their largely white/light skinned privileged Global Western consumer with the buying power that the worlds Black/African Diasporic population don't have (due to racist uneven development via colonialism, imperialism, and neoliberal racist economic system)."

These are some of the issues we will tackle in my upcoming conference.

MZ: Please tell our readers a little more about the conference and how they can get involved.

Breeze: Designed for Black vegans, vegans of color, and their white allies, this interactive, online event, offers an opportunity for collaborative discussion, building networks of engagement and knowledge sharing. It will also work to bring forward suggestions and inspiration to build momentum for collective change.

MZ: I know you’re very much connecting this conference to the growing BLM movement. How do you aim to do that?

Breeze: This year’s conference workshops and talks will ask questions like:

Breeze: That's a complex question and I won't say I have all the answers. I highly recommend that those seeking allyship pick up basic introductory materials on understanding how systemic racism functions/operates. I would think that non-Black (but not white) populations such as indigenous people, brown folk, would not need to have a primer in this since these demographics already collectively suffer from the violence of systemic racism and white supremacy.

MZ: How does this intersect directly with white vegans?

Breeze: The problem I find with many white vegans who claim to want to be allies or claim "I'm not racist" is that they have not educated themselves about systemic racism in general, nor have they picked up a primer on critical whiteness studies. A lot come into “allyship” through a white missionary colonialist approach (and don't even realize it!!!). Allyship looks like this as well: do not make yourself the center of attention when the focus is Black liberation and not your (non-Black experience). This advice really is mostly for white collectivity, as they are used to always being center, being heard, etc.

Take a step back, be silent, and listen to Black folk doing the Black liberation work and don't always think you have to talk or even "whitesplain" how Black Liberation can be; and please don't respond with "All Lives Matter" in reference to Black Lives Matter (see my recent blog post on this).

Also, non-Black people need to actively call out anti-black rhetoric as soon as they witness it from non-Black people, organizations, etc. Do not be silent because that is collusion. You have to develop a critical race literacy to even notice what anti-Black banter is. If you don't have this literacy then you may not even know that anti-Black racism is occurring. Develop this literacy. Do a quick search of terms like “environmental racism,” "neoliberal racism," and “systemic racism" and you will find a lot of information. Ignorance is not an excuse.

Contact A. Breeze Harper: This email address is being protected from spambots. You need JavaScript enabled to view it.

#BlackLivesMatter, Veganism, & Intersectionality: An Interview with A. Breeze Harper by Mickey Z. is licensed under a Creative Commons Attribution-ShareAlike 4.0 International License.

Based on a work at https://worldnewstrust.com/blacklivesmatter-veganism-intersectionality-mickey-z.