A long overdue ‘thank you’ to Spielberg for helping me get my first book deal | Mickey Z. 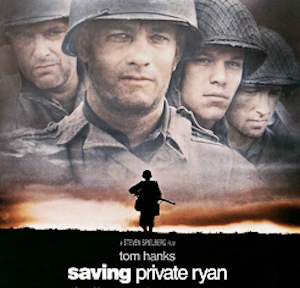 “We're not here to do the decent thing, we're here to follow orders!”

The Museum of the Moving Image (MOMI) is just finishing up its “Spielberg Summer.” Part of this cinematic retrospective was the 1998 film Saving Private Ryan. I have a very unique relationship with this WWII/D-Day movie. Thus, I decided to go see it on the big screen again, nearly two decades after its initial impact.

“A just war”
It was a conversation with a Vietnam vet about Saving Private Ryan that set the writing of my first published book (Saving Private Power: The Hidden History of the “Good War”) in motion and launched my “career” as an author. The jury is still out as to whether that was a good thing but, for now, I’ll stick to the book-inspiring chat.

Yes, we both agreed, war can be “really like that opening sequence.”

When it came time to question the motives of those who sent “our boys” to face such carnage, even the vet had to admit that little about the Vietnam War could justify this action.

“But,” he hastily added, “World War II was different. That was a just war.”

Was WWII a just war? Is the “Good War” fable rooted in reality, false hope, or propaganda? This enduring myth goes well beyond Memorial Day barbecues and flickering black-and-white movies on Netflix. WWII is the most popular war in American history: 18 million served in the armed forces while 25 million home-front workers gave regularly to war bonds.

According to the accepted history, it was an inevitable war forced upon a peaceful people thanks to a surprise attack by a sneaky enemy. This war, then and now, has been carefully and consciously sold to us as a life-and-death battle against pure evil. For most Americans, WWII was nothing less than good and bad going toe-to-toe in khaki fatigues.

But, Hollywood aside, American lives weren’t sacrificed in a holy war to avenge Pearl Harbor nor to end the Nazi Holocaust, just as the Civil War wasn’t fought to end slavery. WWII was about territory, power, control, money, and imperialism.

“My part”
What I experienced from viewing Saving Private Ryan in 1998 was a feeling of dread and guilt. I knew as I sat in that comfortable, air-conditioned theater, watching the scenes of bloody warfare unfold, bombs were exploding in many places across the globe. Machine guns were being fired on soldiers and civilians and dissidents. Land mines were blowing off legs without any concern for ideology. And not only were many of these weapons produced thanks to American taxpayers like me, the death and destruction was being justified by someone somewhere as being part of a “good” cause.

As I walked from the old Ziegfeld Theater with tears in my eyes, I felt moved to do “my part” to help peel away the layer of propaganda that obscures the imperialist motives of most military conflicts, turning them instead into patriotic exercises with all the pathos of a video game. Addressing each war was not an option. Analyzing every economic factor and ideology was not my goal. My goal -- as delusional as it now sounds -- was to challenge the “Good War” myth: how it came to be, who perpetrated it, who benefits from it, and what is its legacy.

My ostensible, pathetically quixotic hope was that by exposing the lie of such a powerful and enduring myth, we can all begin questioning everything being marketed to us within our commodity culture. Saving Private Ryan, by bringing home the insanity and suffering of warfare, led directly to Saving Private Power which, I felt, could help explain how that insanity and suffering has been packaged and sold as inevitable and necessary… and good.

The “Good War” fable endures because it caters to a basic need to recast our actions and the actions of those we are taught to revere in a new light in order to make it easier to live with these actions and still maintain a positive self-image. As a result, justification is crucial and common for those in power and the masses they need to manipulate into denial.

Films like Saving Private Ryan are popular attempts at such justification. Even if war is hell and the good guys sometimes lose their way, these vehicles teach us that there is still no reason to question the morality of the mission nor the stature of that particular generation.

Perhaps the main difference between WWII and any other bloody military conflict throughout history is scope: with high-end estimates of 50 million dead bodies scattered across the entire globe from Nanking to Dresden, from Hiroshima to Auschwitz, from Pearl Harbor to Stalingrad. Our debt to those 50 million is to not glorify or romanticize their deaths. Instead we must struggle to comprehend the truths behind the facade and analyze the motivations of the men involved.

Fast-forward to 2017
As I walked from the MOMI with tears in my eyes, I again felt moved to do “my part” to help peel away the layer of propaganda that obscures the imperialist motives of most military conflicts, turning them instead into patriotic exercises with all the pathos of a video game.

There were tears in my eyes but this time, my feet remained on the ground. The ensuing 19 years years had taught me how undeniably useless my passion and my concept of justice are. I wept for the millions slaughtered in wars (etc.) since then. I wept for my delusion and impotence. I wept for the delusion that continues to drive “activists” and blinds them to their own impotence.

I can and do take solace in the reality that Saving Private Power is one of only two of my 12 books that I haven’t disowned. So here’s my belated thank you to Steven Spielberg for his unintentional inspiration and help.

But, even so, never once in that book did I name the problem: The Second World War was just another (albeit massive) example of murderous male supremacy in action.

While re-watching Saving Private Ryan, I now pondered how every bomb, land mine, grenade, flamethrower -- every single weapon -- sprung from the necrophilic imagination of a man. I studied the male characters more closely. Each of them were born with compassion and empathy. Each of them were turned into a monster -- some more willingly than others.

Therefore, all these years later, please allow me to introduce a crucial coda to my first book’s thesis: American lives weren't sacrificed in a holy war to avenge Pearl Harbor nor to end the Nazi Holocaust. WWII was about territory, power, control, money, imperialism, and most of all: large-scale patriarchal violence.

Name the problem
“The problem after war is with the victor” wrote revolutionary pacifist A.J. Muste. “He thinks he has just proved that war and violence pay. Who will now teach him a lesson?”

A long overdue ‘thank you’ to Spielberg for helping me get my first book deal by Mickey Z. is licensed under a Creative Commons Attribution-ShareAlike 4.0 International License.
Based on a work at https://worldnewstrust.com/a-long-overdue-thank-you-to-spielberg-for-helping-me-get-my-first-book-deal-mickey-z.