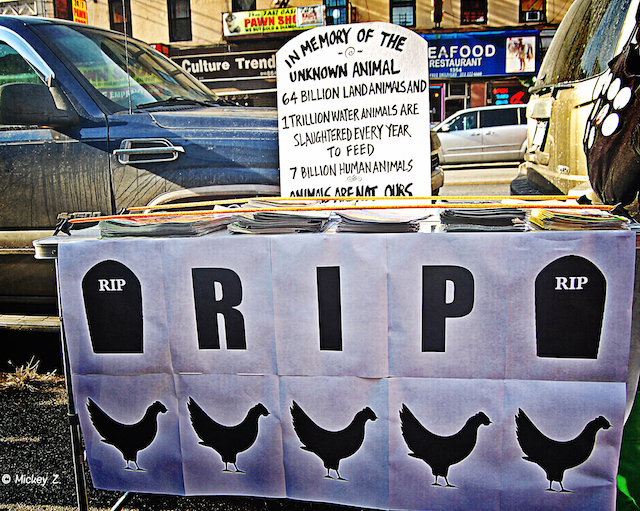 The first line of description on its Facebook page reads: “We live in a time when the longest running and most devastating holocaust is taking place right under our noses, yet just like the Holocaust during World War II, it is completely ignored.”

Upon encountering this predictable but counterproductive exhibition, I had two immediate thoughts:

The use of the word “holocaust” in relation to factory farming is semantically accurate but horribly insensitive and demonstrably ineffective.

The excuse that the world “didn’t know” about the Nazi Holocaust is an enduring and spurious fabrication.

Since one or both of these thoughts will be deemed “controversial” by some, please allow me to elaborate…

“Surprise and pain”
If there was ever a litmus test for discerning a good war from a bad war, history provided it during WWII. Indeed, the most frequently evoked after-the-fact rationale for the deadliest war in history being labeled a moral battle was the Allies' supposed aim to stop the Nazi Holocaust.

Hitler's "final solution" took the lives of roughly 6 million Jews along with millions more Slavs, Eastern Europeans, Roma, homosexuals, labor leaders, and suspected communists. If decency played any role, the United States would have taken action against Germany some time during the 1930s.

Howard Zinn explains that, simply put, "the plight of Jews in German-occupied Europe, which many people thought was at the heart of the war against the Axis, was not a concern to Roosevelt ... (who) failed to take steps that might have saved thousands of lives. He did not see it as a high priority."

As Benjamin V. Cohen, an advisor to FDR, later commented, "When you are in a dirty war, some will suffer more than others.... Things ought to have been different, but war is different, and we live in an imperfect world."

Swirling around the subject of the Holocaust in our "imperfect world" are many questions. Who knew about Hitler's plan and when? What was done to stop it? Were there complicit roles played by factions within the United States?

While volumes have been written to correctly challenge those contemptible historical criminals who deny the Nazi death camps ever existed, one of the more subtle forms of denial is rarely questioned or even mentioned. This particular negation involves the deep-seated belief that the West was simply not aware of the extent of Nazi Germany's atrocities until the war was nearly over, and once they knew the truth, they acted expediently to save lives.

To accept this fiction is to enable oneself to believe that the inaction of the Allies was due merely to lack of information. Apologists can pretend that the details of the Holocaust were not known and if they had been, the United States would have intervened, but as historian Kenneth C. Davis explains:

"Prior to the American entry into the war, the Nazi treatment of Jews evoked little more than a weak diplomatic condemnation. It is clear that Roosevelt knew about the treatment of the Jews in Germany and elsewhere in Europe, and about the methodical, systematic destruction of the Jews during the Holocaust. Clearly, saving the Jews and other groups that Hitler was destroying en masse was not a critical issue for American war planners."

Indeed, when a resolution was introduced in January 1934 (!) asking the Senate and the President to express "surprise and pain" at the German treatment of the Jews, the resolution never got out of committee. Such inaction was not reversed even as more specific details began to reach the average American.

On October 30, 1939, the New York Times wrote of "freight cars ... full of people" heading eastward and broached the subject of the "complete elimination of the Jews from European life" which, according to the Times, appeared to be "a fixed German policy."

As for the particulars on the Nazi final solution, as early as July 1941, the New York Yiddish dailies offered stories of Jews massacred by Germans in Russia. Three months later, the New York Times wrote of eyewitness accounts of 10,000-15,000 Jews slaughtered in Galicia.

The German persecution and mass murder of Eastern European Jews was indeed a poorly kept secret and the United States and its Allies cannot honestly or realistically hide behind the excuse of ignorance. Even when the Nazis themselves initiated proposals to ship Jews from both Germany and Czechoslovakia to Western countries or even Palestine, the Allied nations could never get beyond negotiations and the rescue plans never materialized.

One particularly egregious example was the 1939 journey of the St. Louis. Carrying 1,128 German Jewish refugees from Europe, the ocean liner was turned back by U.S. officials because the German immigration quota had been met. The St. Louis then returned to Europe where the refugees found temporary sanctuary in France, Great Britain, Belgium, and the Netherlands. Most were eventually captured by the Nazis and shipped to death camps.

"The rescue of European Jewry," writes Henry L. Feingold in The Politics of Rescue, "especially after the failure to act during the refugee phase (1939-1941), was so severely circumscribed by Nazi determination that it would have required an inordinate passion to save lives and a huge reservoir of good will toward Jews to achieve it. Such passion to save Jewish lives did not exist in the potential receiving nations."

With a lack of public acknowledgement from the Roosevelt Administration, U.S. public opinion was not aroused. This, Feingold believes, convinced men like Goebbels that the “Allies approved or were at least indifferent to the fate of the Jews.”

Goebbels's line of thinking was not too far from the truth. Even when eyewitness accounts from Auschwitz reached the U.S. Department of War and some in the Roosevelt Administration were pushing for the bombing of the death camp or at least the railways leading to it, the word came down that air power could not be diverted from vital "industrial target system."

It was claimed by American military planners, according to Feingold, that Auschwitz was "beyond the maximum range of medium bombardment, diver bombers and fighter bombers located in (the) United Kingdom, France or Italy."

In March of 1943, Frida Kirchway, editor of The Nation, summed up the situation succinctly: "In this country, you and I, the President and the Congress and the State Department are accessories to the crime and share Hitler's guilt. If we behaved like humane and generous people instead of complacent cowardly ones, the two million lying today in the earth of Poland ... would be alive and safe. We had it in our power to rescue this doomed people and yet we did not lift a hand to do it."

In April 1943, an editorial in the London New Statesman and Nation contemplated the legacy of Allied indifference to the victims of the Nazi Holocaust, predicting "when historians relate this story of extermination, they will find it, from first to last, all but incredible."

That editorial writer, it turns out, was far too optimistic.

It’s been estimated that in all the wars and genocides in recorded history, a total of 619 million humans have been killed. That same number -- 619 million non-human animals -- are killed every five days for “food” by an industry that’s also a top source of human-created greenhouse gases (translation: ecocide).

In a clinical sense, it’s undoubtedly accurate to deem this a holocaust, as in “destruction or slaughter on a mass scale.”

But, I wonder, does it lessen or make light of the nightmarish experiences of humans -- does it alienate much-needed, potential allies -- if we use this word to describe the ongoing treatment of non-humans?

I ask this question because the term “holocaust” has, of course, become uniquely associated with humans of Jewish ethnicity or heritage. While the scores of communists, Roma, homosexuals, and dissidents murdered in Nazi concentration camps would obviously not concur with such limited word usage, the reality remains: Within our current culture, the word “holocaust” has a very specific, highly charged, and proprietary connotation.

"Auschwitz,” wrote sociologist Theodor Adorno, “begins wherever someone looks at a slaughterhouse and thinks: they're only animals."

To disagree with Adorno is to betray one’s speciesist bias. It is also to betray the original meaning of the word: “A holocaust is a religious animal sacrifice that is completely consumed by fire. The word derives from the Ancient Greek holocaustos.”

However, as confident as we are about our proper usage of the word holocaust, we cannot and must not ignore its impact within such a heavily-conditioned culture. Animal rights activists are already relegated to the fringes by mainstream society and demonized by the State. Unless we grow and diversify the movement, we’ll never reach a broad enough audience to fundamentally challenge speciesism. Are we speaking the right language and sending the right message to make that happen?

In a cultural vacuum, words like holocaust, concentration camps, slavery, rape, incarceration, and murder accurately, and effectively, describe the widespread human treatment of non-humans… but we don’t live in a cultural vacuum. Have we chosen a counterproductive battle by defying linguistic norms and clinging to such terms when we know full well how much emotional and political weight they carry?

More and more, I have witnessed anger, outrage, disbelief, and mockery from non-vegans in response to words like holocaust, concentration camps, slavery, rape, incarceration, and murder used in reference to non-humans, so I must ask:

As activists -- as advocates for the voiceless trillions -- is it more important to be semantically correct or to be effective?

What do you say?

Mickey Z. is the author of 12 books, most recentlyOccupy this Book: Mickey Z. on Activism. Until the laws are changed or the power runs out, he can be found on the Web here and here. Anyone wishing to support his activist efforts can do so by making a donation here.

A Different Form of Holocaust Denial by Mickey Z. is licensed under a Creative Commons Attribution-ShareAlike 4.0 International License.
Based on a work at http://worldnewstrust.com/a-different-form-of-holocaust-denial-mickey-z.