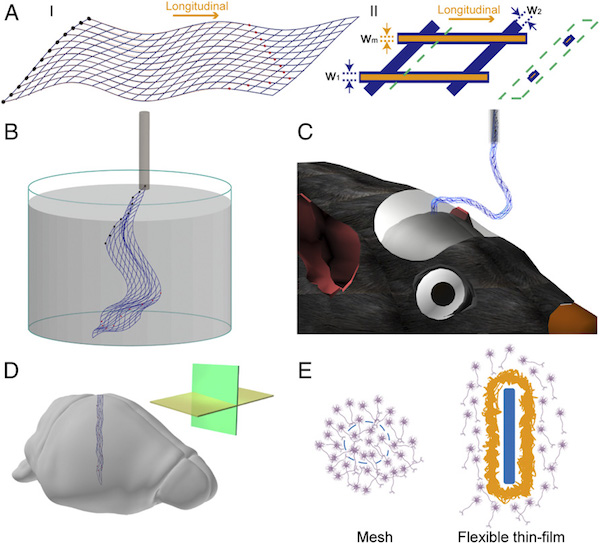 July 5, 2017 (Phys.org) -- Neuroprostheses, neural probes and other intraneural tissue implants have offered remarkable benefits to recipients in a number of areas in neuroscience research and biomedical applications, therapeutic examples being not only Alzheimer's Disease, Parkinson's Disease, epilepsy, traumatic brain injury, and other neurological/neurologically-related conditions, as well as cognition, memory, and sensorimotor disorders.

However, current neural implants have several drawbacks, including neural tissue inflammation or scarring due to device micromotion, as well as longevity and the potential need for removal, and high power requirements. Devising electrical probes that seamlessly integrate within neural tissue has therefore been a coveted goal.

To that end, scientists at Harvard University have reported the successful implantation of a neuromorphic (that is, having a structure similar to brain tissue) ultraflexible open mesh electronics neural probe that is delivered to specific brain regions via syringe injection (a protocol they published in 2015 in Nature Nanotechnology).

The probe -- which does not require a power supply -- directly records neural voltage changes by being able to interface with all regions of the brain from the level of single neuron through circuits and networks, in which the mesh recording electrode is connected by passivated metal lines (that is, having a protective coating applied to its surface) to input/output pads located at the opposite end of the mesh structure.

These I/O pads, in turn, are then connected to Flat Flexible Cables (FFC) and plugged in external system for recording. The researchers also conducted systematic post-implantation studies, finding minimal or absent neural immune responses, and moreover that brain tissue had penetrated and merged with the mesh probe.

The scientists note that the mesh implant may never require removal -- but if it does, doing so would be a straightforward if not issue-free procedure. They conclude that most areas of fundamental neuroscience research could benefit from mesh electronics providing long-term stability and single-neuron resolution -- unique capabilities not found in conventional neuroprosthetics -- and state in their paper that ultraflexible open mesh electronics probes could in the future enable a wide range of opportunities for in vivo chronic recording and modulation of brain activity.