You Say You Want A Revolution... Right? | Mickey Z. 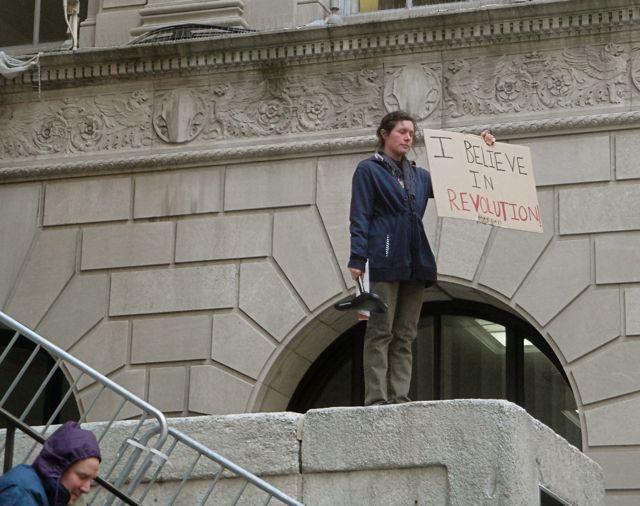 It’s become one of life’s most unexpected ironies to suddenly find myself labeled “too positive.” It seems my enthusiastic support for Occupy Wall Street (OWS) has taken some of my pre-OWS comrades by surprise while simultaneously rankling a few cynical occupiers.

So yeah, I’ll own up to a major shift in the tenor of my writing and public speaking since September 17, 2011 -- but it’s definitely not based on delusion or denial. Rather, there are two discrete reasons that sum up my current mindset:

Of course, just because I’m choosing process over purity and not waiting around for something “more perfect” doesn’t mean I don’t have my differences with OWS. In fact, it might be more accurate to state I have one main issue that can be summed in a basic question: Reform or revolution?

Please allow me to explain via a few examples:

1. Debt relief
We can’t buy back our lives, our freedom, our future. We can’t outspend the 1% -- nor should we ever try. That is the kind of thinking that created this mess in the first place and I very much agree with Cindy Milstein when she declares: "So hard to see hundreds of thousands being raised to give back to the same institutions we are contesting -- that are structurally part of the debt issue in the first place!”

The Rolling Jubilee is an excellent publicity stunt to expose the hidden realities behind consumer debt but let’s never forget that debt is merely a symptom and paying off a few million dollars doesn’t even dent the nearly $3 trillion in total U.S. debt.

Also, in an ironically overlooked twist, this approach is undeniably “charity” -- precisely as most occupiers are celebrating “mutual aid over charity” via Hurricane Sandy relief and recovery.

“A far, far better strategy/tactic is needed, such as collective debt refusal, collective personal bankruptcy, collective self-reduction of the costs of things, and especially, collective creation of alternatives,” says Milstein. “And in each and every case, that should involve face-to-face organizing that builds tangible, collective relations so people together can decide how they want to refuse, resist, and reconstruct."

(My recent article on the debt campaign here)

2. Voting/Lesser Evilism
In 2008, I was a very depressed radical. Mr. Yes We Can had hypnotized so much of the Left that I was certain I wouldn’t be alive to take part in the revolution. However, the Obama team miscalculated. Their marketing campaign mobilized so many people who, when they recognized the Human Predator Drone’s true colors, had to aim all that rage and passion in a new direction.

Unfortunately, in many cases, their rejection of the two-party farce wilted by Election Day 2012 and it was terribly disheartening to witness occupiers twisting themselves into painful contortions in a futile attempt to portray the Pope of Hope as a lesser evil.

(My recent article on the election sellout here)

3. Rejection of veganism/animal rights
All our grievances are connected... until it’s time to eat.

OWS has always been pretty clueless when it comes to food but in the wake of Hurricane Sandy, I felt ever-so-slightly confident that they’d begin grasping the big connections.

Well, not only have 99% (sorry, couldn’t resist) of occupiers so far ignored these connections, many also went right to work planning “holiday” meals for the displaced... meals with factory farmed animals as the main course.

(My recent article on the vegan connections here)

Fork in the Road
There’s more, of course. I could talk about how -- while Occupy Sandy Recovery has been a revelation -- the countless images of occupiers working alongside government officials (FEMA, National Guard, etc.) make me cringe.

And speaking of cringe-worthy: #wegotthis? Talk to those with experience in post-hurricane zones and you’ll quickly learn that no one’s “got” anything yet. Not even close.

But, in-the-field hiccups aside, my bigger picture concerns all come back to the basic question posed above: Are we reformists or are we revolutionaries?

If we buy into the “change the system from the inside” myth and seek crumbs from the 1% table, we can follow the well-trodden path of compromise/surrender blazed by liberals in MoveOn, United for Peace and Justice, the Green Party, and so on.

If we choose instead to recognize the urgency of the myriad global crises, dismantle the system, and commence creating new models, we must be doing a whole lot more than putting out fires and collaborating with our oppressors.

If it’s revolution we desire, we must occupy the big connections and act swiftly and accordingly.