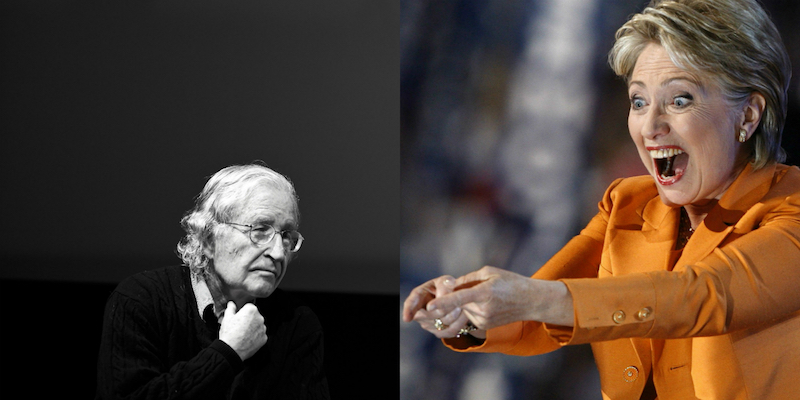 Another presidential election charade is upon us and I’m reminded of something the late Pakistani dissident, Eqbal Ahmad, once said about Noam Chomsky in the book, Confronting Empire (2000): “He (Chomsky) has never wavered. He has never fallen into the trap of saying, ‘Clinton will do better.’ Or ‘Nixon was bad but Carter at least had a human rights presidency.’ There is a consistency of substance, of posture, of outlook in his work.”

(Sounds good in theory but it seems Ahmad wasn’t aware Noam had voted for Clinton in 1992.)

“Decent human survival”
By 2004, Chomsky was far more public about his voting strategies, saying stuff like this: “Anyone who says ‘I don’t care if Bush gets elected’ is basically telling poor and working people in the country, ‘I don’t care if your lives are destroyed’.”

And this: "Despite the limited differences [between Bush and Kerry] both domestically and internationally, there are differences. In a system of immense power, small differences can translate into large outcomes."

The “poor and working people in the country” that Chomsky mentions above are paying ZERO attention to him or anyone like him... and that’s a much bigger issue than which war criminal gets to play figurehead for the empire over the next four years.

In 2008, Noam continued to prove Eqbal Ahmad wrong by doling out advice like this: “I would suggest voting against McCain, which means voting for Obama without illusions.”

After eight years of Obama’s repression, exploitation, and ecocide -- sans illusions, of course -- Chomsky is now declaring that the Republican Party and its presidential candidates are “literally a serious danger to decent human survival."

Thus, he is once again talking about “strategic voting,” even if it meant voting for Hillary Clinton -- which he would “absolutely” do!

Since most humans’ memory cards appear to be wiped clean every four years, please allow me to remind you how the original Clinton the Lesser Evil™ worked out for what Chomsky terms “decent human survival.”

Criminal negligence
To begin, let’s all reflect back upon the years 1993 and 1994 -- when President William Jefferson Clinton was enjoying the "advantage" of a Democratically-controlled Congress.

In just two years, the liberal hero abandoned his pledge to consider offering asylum to Haitian refugees, backed away from his most high-profile campaign issue: health care, and reneged on his promise to "take a firm stand" against the armed forces' ban of gays and lesbians.

In 1993-4, Clinton signed a little something called the North American Free Trade Agreement (NAFTA), presided over the invasion of Somalia, increased the Pentagon budget by $25 billion, forced Jocelyn Elders to resign, dumped Lani Guinier, ordered the bombing of Iraq and the Balkans, renewed the sanctions on Iraq, and passed a crime bill that gave us more cops, more prisons, and 58 more offenses punishable by death.

All this came before Newt Gingrich and much-hyped Republican "revolution" in 1994… and I haven’t even gotten to the environment.

In the first three years of the Clinton-Gore regime -- two of which, I remind you, involved a Democratic House and Senate -- Bubba and his little green buddy gave us fun stuff like: The passage of the salvage logging rider, the continuation of the use of methyl bromide, the weakening of the Endangered Species Act and the Safe Drinking Water Act, the lowering of grazing fees on land, the subsidizing of Florida's sugar industry, the reversing the ban on the production and importation of PCBs, and allowing the export of Alaskan oil.

When Clinton ran for re-election in 1996, David Brower, former president of the Sierra Club, wrote an op-ed in the Los Angeles Times called "Why I Won't Vote for Clinton." In this piece, Brower declared that Clinton and Gore had "done more harm to the environment in three years than Presidents Bush and Reagan did in 12 years." (That’s Bush the Elder, not Bush the Lesser… for those of you scoring at home.)

One more time, with feeling: Clinton and Gore did “more harm to the environment in three years than Presidents Bush and Reagan did in 12 years.” When exactly does “decent human survival” come into play here?

I could go on and on about the rest of Bill Clinton’s reign, like the repeal of welfare, a telecommunications bill that further narrowed the already laughable parameters of public debate, the Defense of Marriage Act, but I’ll just focus on one more lesser evil gem: The Anti-Terrorism & Effective Death Penalty Act -- signed into law on April 24, 1996.

This USA PATRIOT Act prequel contained provisions that Clinton himself admitted "make a number of ill-advised changes in our immigration laws, having nothing to do with fighting terrorism." This unconstitutional salvo severely restricted habeas corpus and expanded the number of federal capital crimes -- and the notorious PATRIOT Act is mostly an extension its legal foundations.

Chomsky knows all this (and much more) but as mentioned, he “strategically” chose to vote for Bill Clinton in 1992. I’ll bet the half million Iraqi children who died when Clinton continued Bush the Elder’s sanctions appreciated the gesture.

To paraphrase myself: A vote for either major party is -- at best -- an act of criminal negligence.

The other 364.99 days
Why do I feel any of this matters? I believe for a man of Chomsky’s stature on the “Left” to engage in talk of “strategic voting” is an unnecessary and irresponsible act, one that indirectly contributes to the misguided perception that a Democrat winning the election is somehow a Pyrrhic victory of sorts.

I’ll say it yet again: If you plan to vote for yet another lesser (sic) evil in 2016, go ahead. Kid yourself. Feel superior. Engage in three-hour social media flame wars to defend your choice. Hold your nose and pull the damn lever. Use Chomsky quotes to justify it (even though he’s also called for “ongoing, dedicated, popular movements that don’t pay attention to the election cycle”).

And I’ll add this yet again: Vote or no vote, all that matters is what you’re doing the other 364.99 days. Make no mistake, if we continue allowing our meager time and energy to be diverted into elections, we will one day be asked why we made such a choice.

The human beings and all living things that come after us won’t care who we voted for in 2016, if they have no clean air to breathe, no clean water to use, and are stuck on a toxic, uninhabitable police state of a planet.

They’d probably just want to ask: Why did you stand by and let everything be consumed or poisoned or destroyed? Why in the world did you focus so much of your energy on elections and so little on action?

"You’ll never BELIEVE who Chomsky could 'absolutely' vote for! (but her ex-president husband already knows)" by Mickey Z. is licensed under a Creative Commons Attribution-ShareAlike 4.0 International License.
Based on a work at http://worldnewstrust.com/you-ll-never-believe-who-chomsky-could-absolutely-vote-for-but-her-ex-president-husband-already-knows-mickey-z.