Would you donate even $1 to help homeless women? | Mickey Z. 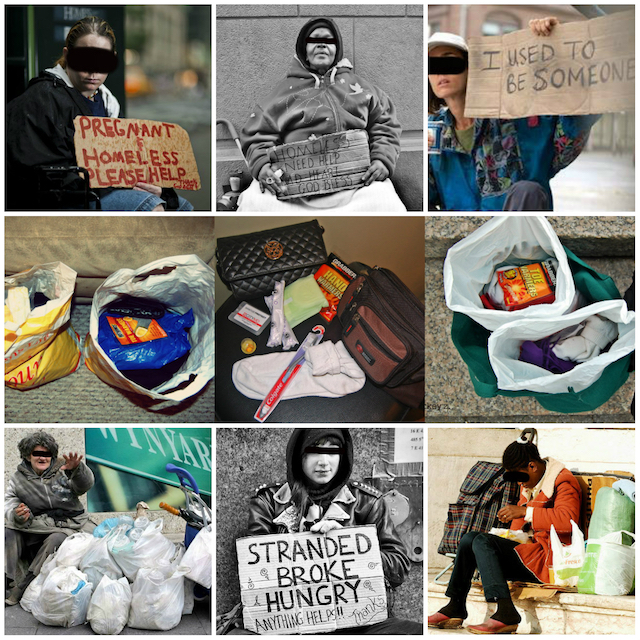 As you all know, I tried the “activism” thing. I really tried.

But now, I’m ready to focus my energies on two things desperately needed in the Trump Era: cultivating serious resistance and providing support for the most vulnerable. I also want to do something specifically for the largest oppressed group on earth: females.

With those last two goals in mind, I created Female Oriented Relief (FOR). The aim of this project is fundamental: I'm raising money to buy supplies I can hand out in person to homeless women in NYC. I've done it before on a smaller scale out of my own pocket, but now I want to help as many women as possible. To do that, I need your help. Even one dollar can make a difference! All funds donated will go directly towards to purchasing supplies and durable bags for those supplies. I call these bags “FOR packs”!

Woman are most often victimized. Homeless people, in general, are ignored or dehumanized. Homeless women? They might as well be invisible.

Some women want to talk. Others keep our interactions to the minimum. Some decline the offer. Others take the bag but make it clear that they want me to leave afterwards. I recall a woman who would not make eye contact. I walked up slowly and tried to explain what was in the bag. She cut me off and asked: "Is that for me?" I nodded and handed it to her. I tried to ask if there was anything she needed but she cut me off and said firmly: "Have a nice day." The whole time, no eye contact. I hate to think what may have happened to inspire such dread on her part but I'm glad I was at least able to offer her something useful.

To follow, I’ll share just a few stories of the amazing, fierce, strong, and kind women I’ve met so far.

Upon getting off a downtown train, I immediately saw a homeless woman on a bench, with a bunch of shopping bags. She was Latina, maybe 25 or so and she appeared to be mentally ill. She was yelling (not very loudly though) in a blend of English and Spanish at everyone who walked near her. Of course, folks were staring at her. (Can you imagine what it feels like in the head of someone like that to be in a super loud, super crowded subway station all day?)

I took out one of the FOR packs and walked slowly towards her. She saw me and aimed her yelling at me (but her eyes didn't seem focused on me or on anything in particular). I smiled and said hi. She instantly stopped yelling and was suddenly focused on me. "Hello," I said again, "would you like some supplies and food in a bag you can keep and use again?" Her face relaxed and she said "yes." I handed her the bag and she smiled a beautiful smile.

"I wish you luck," I said. She smiled again and said, "Thank you very much."

I walked away but took a look back. She was sitting quietly now. All I can hope is that she used the supplies and, for a few minutes, had a hint of peace in her head.

One morning, I saw a blind African-American woman singing for donations. I introduced myself and told her I had a package for her. Her immediate reaction was to very politely decline. I detailed more about the FOR pack so she better understood what I was offering. She relaxed a bit and then explained that she won't accept any open food because: "I learned that people put things in it. Some folks are like that." I asked if I could move the bag near her hands so she could feel what I was giving her. She was fine with that and then lit up. "This is so nice! What color is it?" We introduced ourselves and had a nice 10-minute chat. She told me she has a young daughter therefore she "can't be too careful out here." When I had to move on, I asked permission to shake her hand and she agreed!

There was a homeless woman on a busy Manhattan street, with many bags around her. She was holding a sign in such a way as to hide most of her face -- as if she was mortified to be in such a position.

Her sign read: If you can help, I need... (it listed socks, gloves, thermals, etc.). Since I had some of that stuff with me, I felt okay approaching her. First, a woman gave her coins and the homeless woman said "thanks" without looking up. So, I got a little closer and said, "Excuse me?"

She looked out from behind the sign. She was white, 25 (the most), and looked like she had been crying. She eyed me so I explained: "I'd like to give you this bag of supplies. Perhaps you can re-use the bag, too?" She smiled and said: "Thank you so much. God bless you."

I wished her luck as she put the sign back in front of her face. I turned and instantly saw another woman. I was so mad that I didn't have another bag. I inched closer and saw that she was black -- maybe 19 but looked even younger. I handed her a bunch of bills and wished her luck. She quietly said, "God bless you."

I walked away, crying a little, but feeling certain that I have to do much more of this as the weather worsens.

One afternoon, I encountered a white woman about 24. If I had to guess, she stays up all night out of fear and tries to sleep in public during the day, while asking for help. She was half-asleep when I approached her but seemed to happy to get the bag. Mostly, she looked wiped out and kinda numb but her smile said "thank you."

Next, I saw a much older white woman (60s), loudly talking to herself. This project has encouraged me to still approach such a woman -- just slowly and sweetly. As soon as we made eye contact and I said hello, she stopped talking to herself and was full engaged with me. She was very excited about the bag and dug right in.

It was a cold morning when I crossed paths with a black women who was at least 60. I introduced myself and asked if she'd like a bag of supplies. Her face lit up like a kid on Christmas morning. "Oh my," she said in a Deep South accent, "you're an angel to do this." I was immediately disarmed and entranced by her positive energy.

I told her I was just trying to help and I asked if I could typically find her in that spot. She said yes so I asked if there was anything particular I could bring her. She replied: "I'll take what you bring me, angel. It's just so nice of you."

She did a curtsy of sorts as we made our introductions. I told her my name but she said again: "I'll just call you angel. I met an angel today." I was utterly flabbergasted by her kind words, shook her hand, and urged her to be extra careful. I promised her I look for her again and she just waved and said, "Goodbye angel and thank you again!"

But, as I said above, I fell hard for the “activism” trap and now I wanna focus my skills and gifts more productively. More than ever, in Trump’s America, I wanna do my part to help those most threatened by the rise of neo-fascism.

Please help me with the FOR Project. Please donate here and share the link widely! Thank you in advance…

Mickey Z. is currently writing two books, a memoir called How to Lose Friends & Influence Nobody: My Life as an “Activist,” and a fusion novella entitled stain red. In the meantime, he can be found here.

Would you donate even $1 to help homeless women? by Mickey Z. is licensed under a Creative Commons Attribution-ShareAlike 4.0 International License.
Based on a work at https://worldnewstrust.com/would-you-donate-even-1-to-help-homeless-women-mickey-z.