Why the United States Is Destroying Its Education System (Chris Hedges) 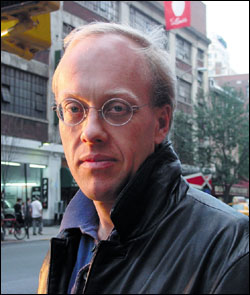 Apr. 11, 2011 (Truthdig) -- A nation that destroys its systems of education, degrades its public information, guts its public libraries and turns its airwaves into vehicles for cheap, mindless amusement becomes deaf, dumb and blind.

It prizes test scores above critical thinking and literacy. It celebrates rote vocational training and the singular, amoral skill of making money. It churns out stunted human products, lacking the capacity and vocabulary to challenge the assumptions and structures of the corporate state. It funnels them into a caste system of drones and systems managers. It transforms a democratic state into a feudal system of corporate masters and serfs.

Teachers, their unions under attack, are becoming as replaceable as minimum-wage employees at Burger King. We spurn real teachers -- those with the capacity to inspire children to think, those who help the young discover their gifts and potential -- and replace them with instructors who teach to narrow, standardized tests. These instructors obey. They teach children to obey. And that is the point. The No Child Left Behind program, modeled on the “Texas Miracle,” is a fraud. It worked no better than our deregulated financial system. But when you shut out debate these dead ideas are self-perpetuating.

Passing bubble tests celebrates and rewards a peculiar form of analytical intelligence. This kind of intelligence is prized by money managers and corporations. They don’t want employees to ask uncomfortable questions or examine existing structures and assumptions. They want them to serve the system. These tests produce men and women who are just literate and numerate enough to perform basic functions and service jobs. The tests elevate those with the financial means to prepare for them. They reward those who obey the rules, memorize the formulas and pay deference to authority. Rebels, artists, independent thinkers, eccentrics and iconoclasts -- those who march to the beat of their own drum -- are weeded out.

“Imagine,” said a public school teacher in New York City, who asked that I not use his name, “going to work each day knowing a great deal of what you are doing is fraudulent, knowing in no way are you preparing your students for life in an ever more brutal world, knowing that if you don’t continue along your scripted test prep course and indeed get better at it you will be out of a job. Up until very recently, the principal of a school was something like the conductor of an orchestra: a person who had deep experience and knowledge of the part and place of every member and every instrument. In the past 10 years we’ve had the emergence of both [Mayor] Mike Bloomberg’s Leadership Academy and Eli Broad’s Superintendents Academy, both created exclusively to produce instant principals and superintendents who model themselves after CEOs. How is this kind of thing even legal? How are such ‘academies’ accredited? What quality of leader needs a ‘leadership academy’? What kind of society would allow such people to run their children’s schools? The high-stakes tests may be worthless as pedagogy but they are a brilliant mechanism for undermining the school systems, instilling fear and creating a rationale for corporate takeover. There is something grotesque about the fact the education reform is being led not by educators but by financers and speculators and billionaires.”