What we can learn from leaked terrorist torture videos | Mickey Z. 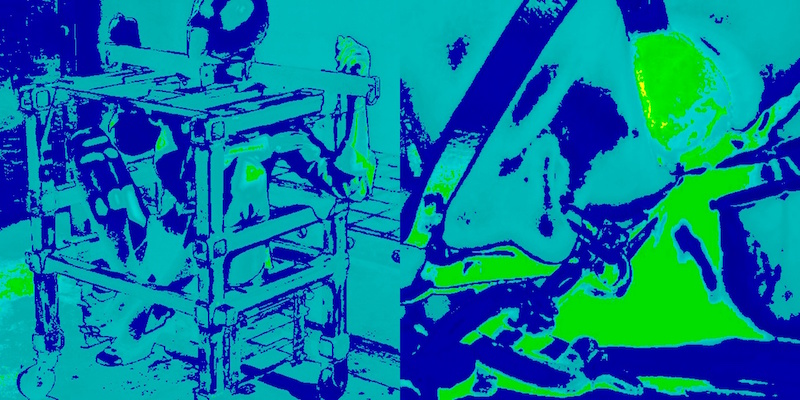 Being a writer who covers radical issues occasionally has its perks.

For example, I recently became the recipient of three secret torture videos (complete with captions and descriptions). The anonymous senders said they trusted I’d “make good use” of them. So, with this important mission in mind, please allow me to introduce a horrifying but illuminating glimpse into the terrorist mindset.

The first footage showed a bruised and battered captive stripped naked and being kept in a small cage, a cage too small to allow the person to either stand or lie flat at full extension. The victim was wearing some kind of collar which was connected to cage itself by a long chain leash of sorts.

We next see a terrorist enter the room, open the cage, and disconnect the chain. He uses the chain leash to lead the captive out on all-fours. Interestingly, the victim makes no effort to resist but perhaps the caption explains why: “Pacification through terror.”

The last few minutes of the video involves the hate-fueled torturer pushing the captive into a prone position, face-up, and then straddling them -- knees pinning the victim’s arms to the filthy floor. At this point, the sadist begins to pummel the captive’s face and upper body with punches in what looks like a MMA match without a referee. The sound of clenched fists hitting flesh is nauseating.

Video #2 begins with the victim already naked, on all-fours, and seemingly under the influence of some kind of sedative or narcotic. Three torturers are in the room.

One roughly holds the captive’s head in position so they can see what’s happening. A second terrorist inserts a clear plastic tube into the victim’s anus. At the other end of the tube is a large plastic funnel. The third abuser holds a pail filled with water.

Swimming in the water are live silvery fishes about six inches long and maybe 1.5 inches in diameter. He lifts the pail up and pours several of the fishes into the funnel. Gravity forces the fish to swim through the clear tube and into the victim’s anus.

The clip ends with a shot of the captive’s expressionless face, eyes rolling back in their head. Caption: “It should be more compliant after this treatment.”

Finally, we see another naked victim being held in an intricate restraint on a tall table. Their spread legs are held in place with knees bent up towards their chest, arms cuffed to the table at the wrists, and head held in place by a thick iron collar that’s also attached to the table.

Judging from the open cuts, bruises, welts, and scars, the victim has been subjected to a brutal beating. A terrorist stands close by, holding a small jar bearing the label “Fire Sauce.” He uses a medium-sized paintbrush to stir the sauce, bringing the gooey brush close to the victim’s nose. The victim recoils. This substance is obviously quite potent.

The laughing sadist then uses the brush to slowly and meticulously “paint” the hot sauce onto the victim’s shaved genitals. The result: harrowing shrieks and howls of agony -- made even more unforgettable by the words used to describe the terror tactics: “Cannot move, cannot scream, cannot rest, cannot escape. Can only endure.”

I turned off the last video and wondered: What kind of hate must one feel to perform such torture and to film it? Who are these savages and who is funding them? ISIS? CIA? Mossad? Al Qaeda? Did this cruelty take place at Gitmo or perhaps a secret prison in North Korea?

But just then, a second e-mail arrived to reveal the origin of all three videos of sadistic abuse. And what a relief to learn it was a false alarm! The source was a popular social media website.

(And thankfully, the individuals I called “victims” were just women.)

What we can learn from leaked terrorist torture videos by Mickey Z. is licensed under a Creative Commons Attribution-ShareAlike 4.0 International License.
Based on a work at https://worldnewstrust.com/what-we-can-learn-from-leaked-terrorist-torture-videos-mickey-z.