What’s the life of a single raccoon worth? | Mickey Z. 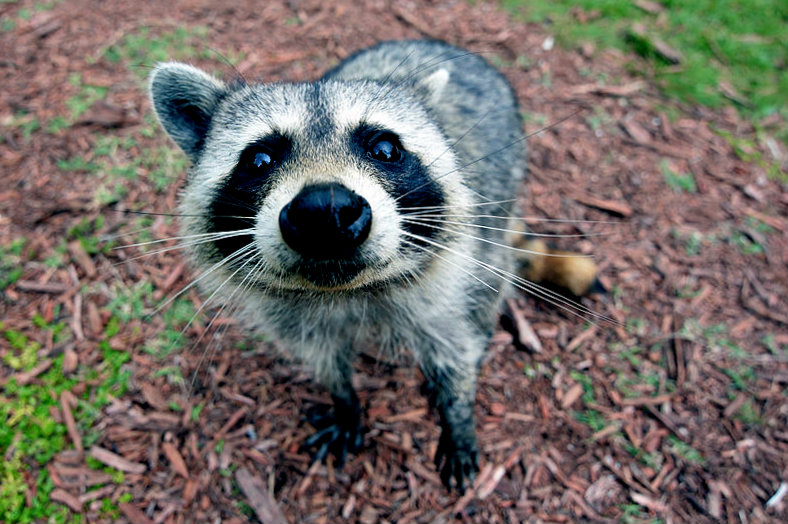 I notice things. If I casually glance out my bedroom window -- in my apartment of more than a dozen years -- I will notice if there’s anything new in my frame of sight. That Saturday morning, it was something dark on a nearby roof. I’m on the third floor and not too far away are some one-family houses of which I can see parts of their roofs.

I pay attention. When this new dark spot came into my awareness, I dropped what I was doing and took a long look. Many, many times I’d seen raccoons emerge from a vent and dash across those white roofs -- but always after dusk. Yet this was clearly a very large raccoon at around 8 a.m. My first guess: it tried to exit a different vent and found that the vent was covered with a cage-like grating.

I watched longer. The ugly reality sunk in. It wasn’t cage-like grating. It was a cage-like cage. Someone had set a trap and this big guy fell prey. He began to thrash around -- jabbing his limbs through the spaces between the bars.

I grabbed my phone. Dialed 3-1-1. While I waited for all the machine commands to end, I watched the frenzied raccoon clawing at and chewing on whatever roof surface he could reach. I fantasized that he could somehow chew his way out, but I knew better. Based on his motor patterns, I started to wonder if there may have been some poison in the trap.

I sighed. An indifferent-sounding 3-1-1 operator switched me to “Animal Control” where I got two automated suggestions: leave a detailed voice message and send an email. I promptly did both.

I got involved. Humans in general and New Yorkers, in particular, prefer to not “get involved.” But I opted to leave my full name and number in both correspondences, just in case it might help my “complaint” move more quickly through the triage queue.

I got dressed. I walked around the corner to the house, dreading this interaction. In the 12 years I’ve lived here, I’ve never spoken to the owners of that house -- but I witnessed them in action plenty of times. In the name of discretion, I’ll just say what I’ve seen was not pleasant.

I was taken aback. Their front door did not have a doorbell. I knocked and heard their dog go bananas. This led me to move back down the steps so I’d have room to move if I had to. Not necessary, though, as no human ever came to the door.

I took another shot. Since the caged raccoon was right at the border of the next house’s roof, I figured I ring their bell, too. But, oddly, they didn’t have a bell either -- just a handwritten note that read “NO” taped to where the bell used to be. I knocked and again moved myself further from the door. Again, no answer.

I got creative. On a nearby light post, two duplicate flyers were taped. I tore one down, turned it over, and scribbled: “There’s a trapped raccoon on your roof and it’s been reported to the city.” I used some of the flyer’s clear tape to attach the note to the original house’s front door. I then took a walk to run errands.

I returned. The note was still there, untouched. I went back to my apartment. The caged raccoon was still there, unmoving. He may have been sleeping but let’s face it. The heat, humidity, direct sun, lack of food or water, sheer stress of being trapped, and maybe poison -- he was either in a pre-death catatonic state or had already shuffled off this mortal coil.

I looked elsewhere. Online, I learned that trapped raccoons in NYC are routinely killed. This story’s ending was written long ago. So I went with one last idea in a desperate hope to speed up the process. I found the city’s webpage for reporting a dead animal. Again, I gave all my personal info as I reported it… twice.

I was reminded. Of how powerless I am. Of how limited good intentions can be.

I got a reply. A woman from Animal Control finally called me -- 11 hours after my initial contact. I told her the entire story after which she explained that neither her agency nor any other city agency could or would do anything for a trapped or dead raccoon on private property. Not even the police, she claimed, would risk injury to get on that roof.

I got answers. An hour after that frustrating phone call, I decided to check again to see if my note had been read. Just as I turned the corner, I saw that a private “pest” guy had shown up and was talking to two homeowners as he positioned a ladder. I dashed back home and watched out the window as the dude dragged away the dead raccoon in its cage and put down some kind of disinfectant in that spot. Since I suppose this mission was deemed a “success,” he promptly placed two more trap cages for that night.

I mourned. For a system so devoid of compassion. For a culture so lacking in vision. For a society that rewards and encourages dominance and sadism. Mostly, I mourned for a frightened raccoon who died that Saturday in the hot July sun.

What’s the life of a single raccoon worth? by Mickey Z. is licensed under a Creative Commons Attribution-ShareAlike 4.0 International License.
Based on a work at https://worldnewstrust.com/what-s-the-life-of-a-single-raccoon-worth-mickey-z.
back to top