What if I told you Rosa Parks wasn’t the first woman to not give up her seat | Mickey Z. 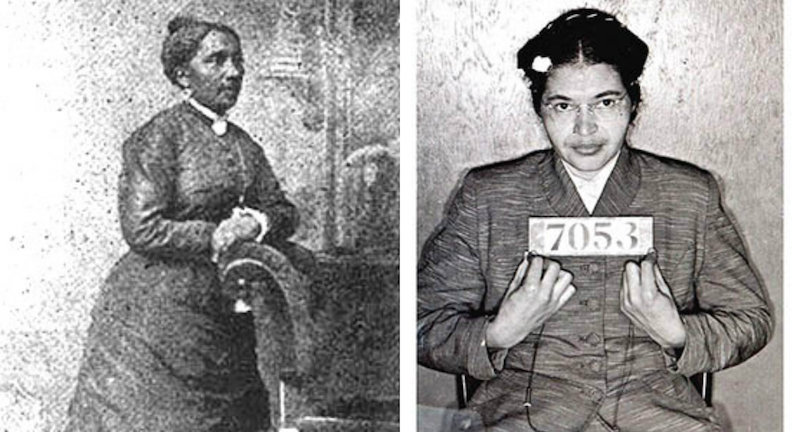 Most Americans know well who the male civil rights figures are and have been. From MLK to Jesse and Malcolm to Sharpton, they are iconic household names. One of the few black women to attain such a rarefied status is Rosa Parks — and even then, her legacy is founded on willful sexist misperceptions.

The men of the civil rights movement, we’re told, had strategy and vision. Parks merely made a spur-of-the-moment decision to not to give up her bus seat to a white passenger. She was an old and tired woman who could’ve never imagined such a furor.

Before we move on to meet Rosa’s spiritual predecessor, let’s clarify: Parks spent 12 years leading her local NAACP chapter and had trained at Tennessee’s labor and civil rights organizing school, the Highlander Center. She was a strong, smart activist with vision and endurance.

In her 1991 book, My Story, Parks explained: "People always say that I didn’t give up my seat because I was tired, but that isn’t true. I was not tired physically, or no more tired than I usually was at the end of a working day. I was not old, although some people have an image of me as being old then. I was 42. No, the only tired I was, was tired of giving in.”

Even so, at least most of us know something about Rosa Parks. Who among you are familiar with the actions of a 24-year-old schoolteacher named Elizabeth "Lizzie" Jennings a century earlier?

No impetuous act of disobedience

Getting around 1854 New York City often involved paying a fare to board a large horse-drawn carriage — the forerunner to today’s behemoth motorized buses. For black New Yorkers like Jennings, it wasn’t that simple.

Pre-Civil War Manhattan may have been home to the nation’s largest African-American population and New York’s black residents may have paid taxes and owned property, but riding the bus with whites, well, that was a different story. Some buses bore large "Colored Persons Allowed" signs, while all other buses — those without the sign — were governed by a rather arbitrary system of passenger choice.

This heinous arrangement was the focus of a burgeoning activist movement for public transportation equality with Rev. J.W.C. Pennington of the First Colored Congregational Church playing a major role. On July 16, 1854, Jennings set out to fulfill her duties as organist at the Sixth Street and Second Avenue church. Against such a volatile backdrop, she fatefully waited on the corner of Pearl and Chatham and opted for a bus without the "Colored Persons Allowed" sign.

The New York Tribune described what happened next: “The conductor undertook to get her off, first alleging the car was full; when that was shown to be false, he pretended the other passengers were displeased at her presence; but (when) she insisted on her rights, he took hold of her by force to expel her. She resisted.”

The outraged Jennings told the conductor she was "a respectable person, born and raised in this city," calling him "a good-for-nothing, impudent fellow for insulting decent persons while on their way to church."

The Tribune picks up the story from there: "The conductor got her down on the platform, jammed her bonnet, soiled her dress, and injured her person. Quite a crowd gathered, but she effectually resisted. Finally, after the car had gone on further, with the aid of a policeman they succeeded in removing her."

This would not be the end of it for, like Rosa Parks, Jennings’ behavior was no impetuous act of disobedience. "Jennings was well connected," says Williams. "Her father was an important businessman and community leader with ties to the two major black churches in the city."

Not satisfied with the massive rally that took place the following day at her church, Elizabeth Jennings hired the law firm of Culver, Parker & Arthur and took the Third Avenue Railway Company to court. Jennings was represented by a 24-year-old lawyer named Chester A. Arthur — yes, he who would go on to become the 21st president upon the death of James A. Garfield in 1881.

The trial took place in the bus company’s home base of Brooklyn (then a separate city) where, in early 1855, Judge William Rockwell of the Brooklyn Circuit Court ruled in the black schoolteacher’s favor… in that 1855 sort of way: “Colored persons if sober, well behaved and free from disease, had the same rights as others and could neither be excluded by any rules of the Company, nor by force or violence.”

Jennings claimed $500 worth of damages but as the Tribune put it, "Some jury members had peculiar notions as to colored people’s rights," and she ended up with only $225, plus another $22.50 for court costs. Regardless, just one day after the verdict, the Third Avenue Railway Company issued an order to admit African-Americans onto their buses.

By 1860, all of the city’s street and rail cars were desegregated and Elizabeth Jennings had married Charles Graham. She was still teaching in New York’s African-American schools. But the struggles, of course, were far from over.

Thanks to a July 1863 resolution called the Union Conscription Act, any New Yorker with a spare $300 was able to buy his way out of the Civil War draft. Resentment over such favoritism soon turned into rioting by poor whites.

The ensuing "Draft Riots" featured racial scapegoating and saw more than 70 African-Americans lynched. There were other, lesser-known victims like Thomas J. Graham, one-year-old son of Elizabeth and Charles. Circumstances surrounded the child’s death remain unclear but it’s believed that young Thomas died of "convulsions" as the rioting and violence played out on the streets outside his home.

Although calm had yet to be restored to her city, Elizabeth Graham boldly solicited the help of a white undertaker and managed to get her son’s body to Brooklyn’s Green-Wood Cemetery for a proper burial.

Elizabeth Jennings-Graham died in 1901. Like far, FAR too many history-making women, she has become a footnote to the hagiography of male leaders.

What if I told you Rosa Parks wasn’t the first woman to not give up her seat by Mickey Z. is licensed under a Creative Commons Attribution-ShareAlike 4.0 International License.
Based on a work at https://worldnewstrust.com/what-if-i-told-you-rosa-parks-wasn-t-the-first-woman-to-not-give-up-her-seat-mickey-z.