What Can Pearl Harbor Teach Us About 9/11 and Other 'Surprises?' | Mickey Z. 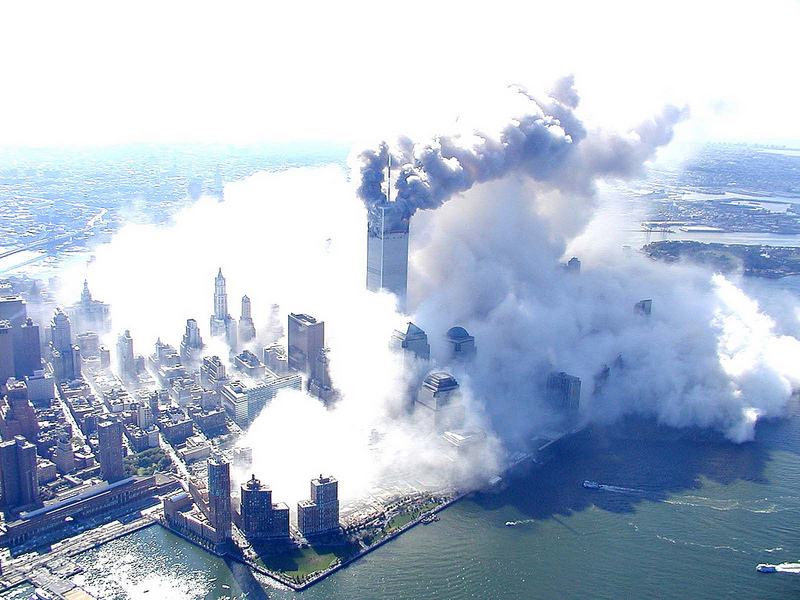 In my 2004 book, Seven Deadly Spins, the first propaganda “spin” I decoded was “The Sleeping Giant.”

It's an excuse we all learn in childhood: "He started it" or "She hit me first." From this rudimentary alibi grows the myth of the "sleeping giant." By portraying oneself as the innocent target of an unprovoked sneak attack, all bases are covered. Translation: Once rudely awakened, don’t blame the sleeping giant if he responds a tad overzealously towards all those sneaky enemies (e.g. Native Americans, communists, Muslims).

We are fast approaching the 74th anniversary of the Japanese bombing of Pearl Harbor on Dec. 7, 1941 -- the mother of all “sleeping giant” spins. The day after the attack, the sainted Franklin Delano Roosevelt addressed Congress. The United States was “at peace” with Japan, he stated, yet had been “suddenly and deliberately attacked.”

However, as historian Thomas A. Bailey wrote: “Franklin Roosevelt repeatedly deceived the American people during the period before Pearl Harbor… He was like the physician who must tell the patient lies for the patient’s own good.”

The diplomatic record reveals some of what Dr. Roosevelt neglected to include in that now-mythical “Date of Infamy” speech:

Obviously, this was a not exactly a surprise attack but why would Japan attack Pearl Harbor? The brutal combination of capitalism and white supremacy, perhaps?

The events of Dec. 7, 1941, were roughly two decades in the making. In 1922, the United States and Britain imposed upon Japan an agreement that the Japanese navy would not be allowed more than 60 percent of the capital ship tonnage of the other two powers. That same year, the U.S. Supreme Court declared Japanese immigrants ineligible for American citizenship, and one year later the Supreme Court upheld a California and Washington ruling denying Japanese the right to own property. The year 1924 saw the passage of the Exclusion Act -- which virtually banned all Asian immigration. (Sound familiar?)

On the economic front, when Japan textiles began out-producing Lancashire mills, the British Empire (including India, Australia, Burma, etc.) raised the tariff on Japanese exports by 25 percent. Within a few years, the Dutch followed suit in Indonesia and the West Indies, with the United States (in Cuba and the Philippines) not far behind. Such moves, combined with Japan’s expanding colonial designs, brought the United States. and Japan ever closer to conflict.

When France fell to Germany in 1940, the Japanese moved quickly to take military control of French colonies in Indochina (the primary U.S. source for tin and rubber). On July 21, 1941, Japan signed a preliminary agreement with the Nazi-sympathizing Vichy government leading to Japanese occupation of airfields and naval bases in Indochina.

Almost immediately, the United States, Britain, and the Netherlands instituted a total embargo on oil and scrap metal to Japan -- tantamount to a declaration of war. This was followed soon after by the United States and UK freezing all Japanese assets in their respective countries.

Radhabinod Pal, one of the judges in the post-war Tokyo War Crimes Tribunal, later argued that the United States had clearly provoked the war with Japan, calling the embargoes a “clear and potent threat to Japan’s very existence.”

Since the attack wasn’t a total surprise, you may be wondering how the Americans still managed to get caught with their pants down on Dec. 7, 1941. Again, I urge you to not underestimate the collective power of capitalism, white supremacy, and arrogance.

Racists within the U.S. military and government never imagined that Japan could orchestrate such a successful offensive. Few Westerners took the Japanese seriously, with journalists regularly referring to them as “apes in khaki” during the early months of their conquest of Southeast Asia.

“Many Americans, including Roosevelt, dismissed the Japanese as combat pilots because they were all presumed to be ‘near-sighted’,” historian Kenneth C. Davis writes. “There was also a sense that any attack on Pearl Harbor would be easily repulsed.”

Which brings us neatly to a more recent case of the sleeping giant: 9/11. Putting aside theories about remote-controlled planes or devices planted in the WTC, it’s easy to imagine both Bill Clinton and George W. Bush had more than an inkling that Osama and Co. were plotting something big. Why not? As in the decades leading up to Pearl Harbor, the United States was again acting as “a clear and potent threat” to many peoples’ existence.

It’s equally as palatable to assume that either party would gladly exploit any attack on the homeland for their benefit and that of their corporate benefactors.

In addition, and here’s where the Dec. 7 angle really comes into play, what reasonably objective observer would be shocked to learn that both U.S. regimes never believed a group of cave-dwelling nomads could pull off anything approaching the success of 9/11?

One more parallel to ponder: Shortly after the attack on Pearl Harbor, with the image of a uniquely treacherous enemy spread throughout America, U.S. Admiral William Halsey (soon to become commander of the South Pacific Force) vowed that by the end of the war, “Japanese would be spoken only in hell.” His favorite slogan “Kill Japs, kill Japs, kill more Japs” echoed the sentiments of Admiral William D. Leahy, chair of the Joint Chiefs of Staff, who wrote that “in fighting with Japanese savages, all previously accepted rules of warfare must be abandoned.”

Change the word “Japanese” to “Muslim” and well, you know the rest…

When attempting to discern the truth about the events surrounding 9/11, in this history-challenged society, it never hurts to examine what’s come before.

"What Can Pearl Harbor Teach Us About 9/11 and Other 'Surprises?'" by Mickey Z. is licensed under a Creative Commons Attribution-ShareAlike 4.0 International License.
Based on a work at https://worldnewstrust.com/what-can-pearl-harbor-teach-us-about-9-11-and-other-surprises.
back to top