We will not be hijacked: Voices of Occupy (part 4) | Mickey Z. 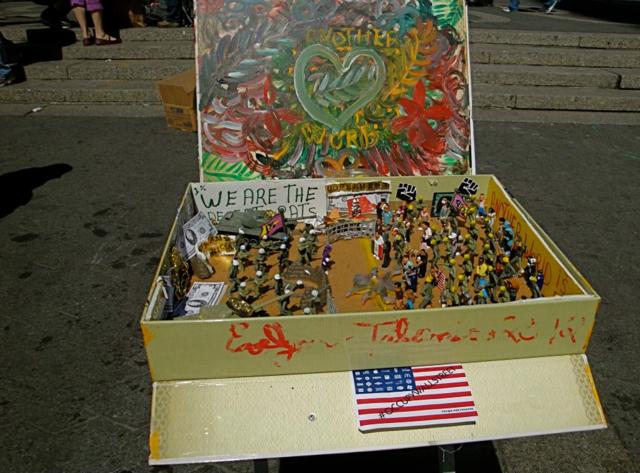 "Our problems stem from our acceptance of this filthy, rotten system." --Dorothy Day

Firstly, at that event, I made a casual reference to Michael Moore as a "fake leftist" and was unexpectedly asked about it during the Q&A. The essence of my reply -- besides mentioning his ill-informed anti-vegan rants -- was to explain that Moore and his ilk are liberals pretending to be radicals and seek only to lead the disenfranchised to the Democrats' doorstep.

Right on cue, one of Moore's ilk -- Russell Simmons -- walked in and caught the tail end of our discussion. Calling me "irresponsible" for describing Republicans and Democrats as two wings of the same corporate party, Simmons ended up getting far more than he bargained for... and not only from me. Others at the event refused to be hijacked by his lesser (sic) evil ploy and he clearly did not have the facts to back up his stance.

This past week, I got a message from one the occupiers who attended that talk -- Shannone Rhea -- informing me of an attempt by a MoveOn front group to co-opt Occupy the East End (OEE). Shannone requested my help in spreading the word so for starters, I offer this excerpt from the OEE press release:

(MoveOn's) most recent attempt to co-opt our movement is by scheduling a "99% Spring Training" by a MoveOn front group called "99% Spring" on April 15, 2012, at the same location and time where Occupy the East End (OEE) has been holding its General Assemblies since the group formed in October of 2011. Occupy the East End delivered an unprecedented unanimous block -- every OEE member at the GA issued a personal block -- to a MoveOn representative who "asked" OEE to participate -- after MoveOn had scheduled the event. The MoveOn rep refused to change the date or time and informed OEE that "you will be taken over [by MoveOn] whether you like it or not."

"I want to always have a place where my political views -- or lack of them -- can always be free," says Shannone. "We are OWS and we are not politically aligned. That needs to be protected and we cannot allow this movement to be absorbed by the Dems. MoveOn can be MoveOn and working with them isn't even out of the picture however, we are different groups and what they are doing out east is fucked up and hostile."

Exhibit A: MoveOn has gone as far as listing OEE as a "sponsor" for the Apr. 15 event.

With that deception in mind, OEE "urgently requests the support of all Occupations and occupiers to rebuff this attempt to CO-OPT OUR movement. Please join us at the Windmill on Long Wharf in Sag Harbor, NY on Apr. 15, 2012, at 11:30am to make your voice heard at the General Assembly of the REAL Occupy movement! Information and detail Inquiries: Direct Action Working Group: This email address is being protected from spambots. You need JavaScript enabled to view it.."

#OccupyYerVoice
OEE's fight is yet another excellent reason why we must all bring our skills and ideas to our local occupation. This movement is committed to not repeating the mistakes of 2008 (trusting a corporate-funded war criminal) and is resisting all attempts by liberals to push occupiers into chasing the futile fantasy of top-down change.

"I've been wanting to scream for a long time, but I was just one little voice that nobody listened to until Occupy Wall Street happened," says Azuma, another occupier who attended my Mar. 23 talk. "With this movement, I’ve found a place where I can express what I want to tell the world, where I can stand against violence and stand up for the rights of all human beings and all other species."

Azuma sees Occupy Wall Street (OWS) as important because "this is our chance to unite and tell the corrupt system that enough is enough."

Mic Check: What brings each of us to unite is as unique and diverse as the occupiers themselves.

Going back to Shannone Rhea, she became involved in OWS when her daughter, Rheannone, called her Sept. 17 from Zuccotti Park.

"I started looking up Adbusters and OWS and totally freaked out," says Shannone. "It was finally going to happen, the people were going to rise up against this corrupt and broken system."

Things got a little more personal a week later, when Shannone saw the cover of the New York Daily News.

"Lo and behold," Shannone explains, "there was Rheannone with two cops on her back. Mickey, that was it. That's my kid -- I raised her -- so of course we are like-minded and she's on the ground, arrested for exercising her freedom of speech?

"I drove to New York, waited for her to be arraigned 36 hours later, and drove her right back to Zuccotti. Wow, what a rush to see all the people.

"After that, I went as much as I could, I learned what the GA (General Assembly) was all about, and I thought: I gotta bring this to my hometown. On Oct. 15, we held our first GA and it was called Occupy the Hamptons -- but we've since had a name change Occupy the East End (OEE)."

OWs can have a profound personal impact, too.

"Finally," Shannone explains, "it felt okay for me to be open about my views and if I wanted to wave a red and black flag, for the first in my life, I felt like I could."

Show Shannone and OEE some love (via the action alert above).

Then: Listen to Yuka, and show the whole damn planet some love...

"It’s not the banks; it’s love that is too big to fail," concludes Azuma. "With all our differences among the people in the world, love is where we can all connect. Let’s choose love instead of fear. We can create a beautiful world."

#OccupyYerStory
It's time we counter the media misinformation and 1% propaganda with a dose of reality -- the hard work, the community, the solidarity, the creativity, the innovation, and the durability behind the OWS banners.

Send me a few lines about your experiences, etc. so I can continue writing The Voices of #Occupy.

Together, we can stop the underestimating and help spread the word that this is the Global Spring and the 1% should fuckin' expect us...

#OccupyYerStory to me: This email address is being protected from spambots. You need JavaScript enabled to view it.