26 percent of Americans believe the sun revolves around the earth.

October 30 will mark 82 years since a 23-year-old Orson Welles helped set off a nationwide panic over a fictional Martian invasion in 1938. His regular Sunday evening radio show began with this unambiguous announcement: “The Columbia Broadcasting System and its affiliated stations present Orson Welles and the Mercury Theater on the air in War of the Worlds by H.G. Wells.” But hey, who pays attention to such details?

What the listening public did focus on was "Professor Farrell” of the “Mount Jenning Observatory" talking about explosions detected on Mars followed by reports of a large “meteor” crashing into a farmer's field in Grovers Mills, New Jersey.

42 percent of Americans believe God created humans in their present form 10,000 years ago.

Gathered rapt around their radios, Americans learned a Martian had emerged from a large metallic cylinder at the New Jersey crash site.

"Good heavens," the actor/reporter declared, "something's wriggling out of the shadow like a gray snake. Now here's another and another one and another one. They look like tentacles to me...I can see the thing's body now. It's large, large as a bear. It glistens like wet leather. But that face, it…it...ladies and gentlemen, it's indescribable. I can hardly force myself to keep looking at it; it's so awful. The eyes are black and gleam like a serpent. The mouth is kind of V-shaped with saliva dripping from its rimless lips that seem to quiver and pulsate."

The broadcast continued as Martians mounted walking war machines, fired "heat-ray" weapons, sprayed poisonous black gas, and disposed of 7,000 National Guardsman with little effort. By the time it was reported by the cast that similar Martian cylinders had landed in Chicago and St. Louis, a full-fledged national panic had commenced.

48 percent of respondents to a recent study weren’t sure where chocolate milk came from.

7 percent of them posited that chocolate milk comes from brown cows.

As for that Halloween Eve in 1938, according to the Museum of Hoaxes: “Some people loaded blankets and supplies in their cars and prepared to flee the Martian invaders. One mother in New England reportedly packed her babies and lots of bread into a car, figuring that ‘if everything is burning, you can't eat money, but you can eat bread.’ Other people hid in cellars, hoping that the poisonous gas would blow over them. One college senior drove forty-five miles at breakneck speed in a valiant attempt to save his girlfriend.”

An Indianapolis woman ran into a church screaming, "New York has been destroyed! It's the end of the world! Go home and prepare to die!” I guess you could say it went viral. 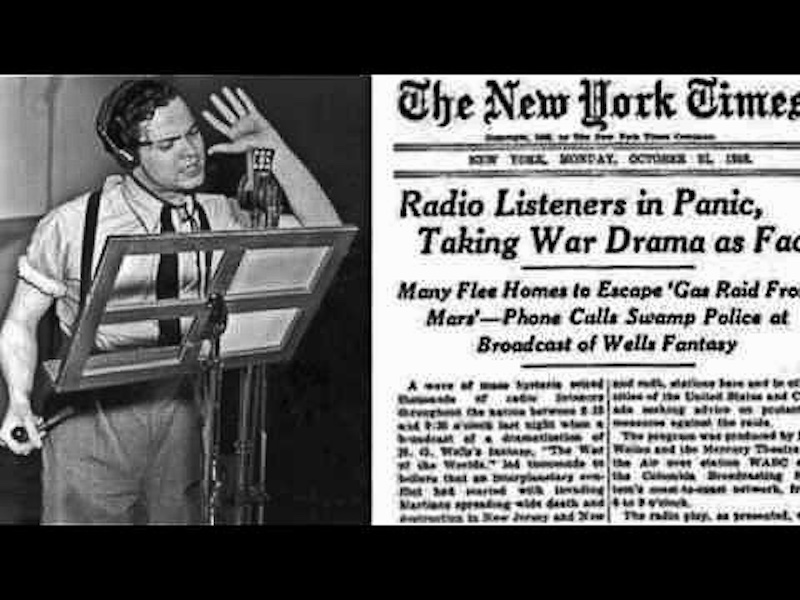 YouTube screenshot from a video about the 1938 Mercury Theater broadcast.

44 percent of Americans identify discrimination against whites as being just as widespread and common as bigotry aimed at blacks and other minorities.

“Mr. Orson Welles and the Mercury Theater of the Air have proved that a few effective voices, accompanied by sound effects, can convince masses of people of a totally unreasonable, completely fantastic proposition as to create a nation-wide panic,” wrote Dorothy Thompson in the New York Tribune, shortly after the 1938 radio broadcast. “They have demonstrated more potently than any argument, demonstrated beyond a question of a doubt, the appalling dangers and enormous effectiveness of popular and theatrical demagoguery.”

And Dorothy wasn’t done. “If people can be frightened out of their wits by mythical men from Mars, they can be frightened into fanaticism by the fear of Reds, or convinced that America is in the hands of sixty families, or aroused to revenge against any minority, or terrorized into subservience to leadership because of any imaginable menace,” Thompson warned. “Hitler managed to scare all Europe to its knees a month ago, but he at least had an army and an air force to back up his shrieking words. Mr. Welles scared thousands into demoralization with nothing at all.”