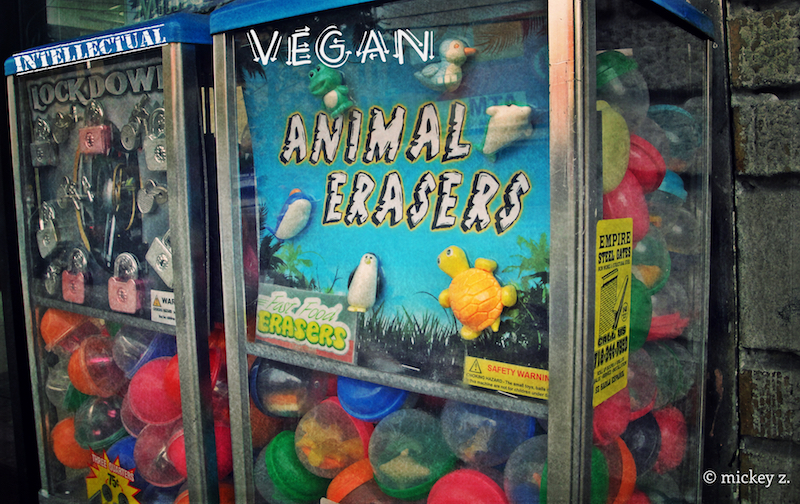 “For me, I am driven by two main philosophies: know more today about the world than I knew yesterday and lessen the suffering of others. You'd be surprised how far that gets you.” (Neil deGrasse Tyson)

What we call “science” is more typically male-dominated phallo-technocracy. All those definitive (sic) studies we cite in posts, memes, blogs, and articles are typically funded by someone and that someone typically has an agenda -- or else that study typically doesn’t happen.

Not all agendas are nefarious, of course, but living within the constricting confines of a corporate culture makes it virtually impossible to discern intent when there’s a profit to be made or an ideology to be advanced.

All this brings me to a study that allegedly found: “Vegetarians displayed elevated prevalence rates for depressive disorders, anxiety disorders and somatoform disorders.”

When “research” like this is brought to the attention of vegans, some will respond by sharing a study that allegedly found a plant-based diet to be beneficial to one’s mental health. Spend a little quality time with your search engine and you too will discover that “research” often “proves” the veracity of diametrically opposed theories.

So… what is the truth? The only “truth” I can recognize here is that “the truth” is often different under different conditions and those conditions rarely remain static. In other words, I’m declaring something that is anathema to the vast majority of vegan outreach/activism: Healthy plant-based eating is a major challenge (nutritionally and financially) and thus, not remotely as “easy” as you say.

I know you don’t like to hear stuff like this. I know this because I see your responses to something like a study linking vegetarianism/veganism to depression and anxiety. One common reaction is for vegans to simply ignore it, claiming they won’t even dignify such nonsense.

Another frequent retort involves a far more insidious form of confirmation bias: “Yes,” some vegans say, “we are indeed more prone to anxiety and depression precisely because we’re so aware of the cruelty in this world. We’re depressed because we care so deeply.”

This is where the self-sabotaging and cult-like nature of veganism rears its ugly head. We found the truth. We live by the truth. Even if it costs us our mental health, we’ll embrace the truth. We’re that dedicated. The rest of you? Not so much.

Of course, such delusions of grandeur do nothing to explain why so many non-vegans get depressed or anxious. However, this all-too-common moral self-righteousness, does go a long way in highlighting why vegans are among the most mocked and marginalized of activists.

Human beings do things like volunteer at rape crisis centers, homeless shelters, and suicide hotlines but we’re being told that vegans have cornered the market on empathy?

Medical professionals willingly put themselves at the epicenter of an Ebola outbreak but somehow they still won’t demonstrate true compassion until they stop eating meat?

Are we to believe that none of these folks (and so, so many others like them) have valid, urgent reasons to experience depression and/or anxiety?

I could go on (and on) but I won’t. I’d rather return to the points I began with: Research can’t always be trusted and going vegan in a truly healthy manner is not easy.

If we accept these two premises -- at least for now -- the only logical and (dare I say?) compassionate choice is stop insulating ourselves within perceived parameters of perceived purity.

“If discovering we can live without benefiting from so many of the ways the other species are oppressed is transformative, then why aren’t we acting as transformed people?” asks Carol J. Adams. “What’s our model for activism based on but male-defined criteria: left-brained, argumentative, scoring points? Where’s incubation, and silence, and trusting interactions, and creativity? Why are we accepting such a limited model?”

Life becomes far more livable and activism far more active once we accept that going vegan is merely one step in a far bigger journey -- a step not everyone can or will take in order to contribute to the manifestation of drastic and sustainable social change.

(Side note: When one of your top nutritional experts details how your dietary choice requires this many adjustments, you have no right to judge anyone who is unable or even unwilling to jump through such hoops.)

More from Carol Adams: “Learning how much suffering and death is inflicted on the other animals is painful. With this knowledge, what do we do? I believe the world is a very fragile place and I am seeking ways of creating change that doesn’t require traumatizing of others. What would activism look like if it had care at the heart of its insights and tactics?”

On that note, I’d like to end with an expanded version of something I recently wrote:

The basic goal of my individual choices now -- particularly as a male -- is harm reduction. I have no illusions I can decrease suffering but I know I can at least put some of my values into practice by making conscious anti-exploitation choices. Some examples of what I mean: not using my meager money and/or boundless energy to support sweatshops or factory farms; circuses or the automobile culture; chemical manufacturers or pornographers; and so on.

Within a culture constructed upon a foundation of patriarchy, white supremacy, and capitalism, the truth is elusive, sometimes fluid, and often obscured by relentless propaganda and conditioning. What we can and must do is keep identifying, demystifying, and unlearning -- but in the process, never forget the combined power of humility and solidarity.

Each of us is wrong far more often than we’re right. Perhaps this fundamental realization can be what finally helps to connect us… before it’s too late.

(Endnote: If you’re trying to discern my“agenda” in writing this article, I urge you to take some time to click on the myriad links I’ve embedded herein to see how many opposing viewpoints and “findings” I’ve provided.)

"(Vegan) Food for (Healthy) Thought?" by Mickey Z. is licensed under a Creative Commons Attribution-ShareAlike 4.0 International License.
Based on a work at http://worldnewstrust.com/vegan-food-for-healthy-thought-mickey-z.