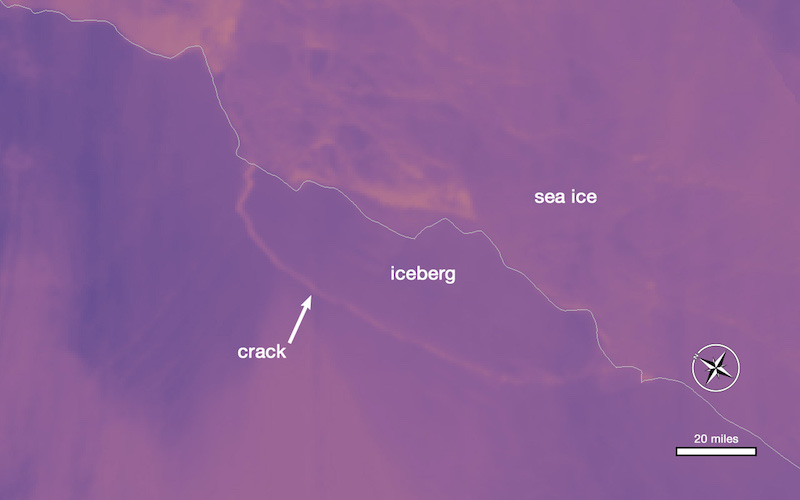 Thermal wavelength image of a large iceberg, which has calved off the Larsen C ice shelf. Darker colors are colder, and brighter colors are warmer, so the rift between the iceberg and the ice shelf appears as a thin line of slightly warmer area. Image from July 12, 2017, from the MODIS instrument on NASA's Aqua satellite. Credit: NASA Worldview

July 12, 2017 (Phys.org) -- A Delaware-sized iceberg, one of the largest ever seen, was set adrift after snapping from a West Antarctic ice shelf that will be closely watched for signs of collapse, scientists said Wednesday.

A crack in the Larsen C ice shelf, a drifting extension of the land-based ice sheet, finally broke through after inching its way across the frozen formation for years.

It created an iceberg of about 5,800 square kilometres (2,200 square miles), with a volume twice that of Lake Erie, one of the North American Great Lakes.

"The iceberg weighs more than a trillion tonnes, but it was already floating before it calved away so has no immediate impact on sea level," said a team of researchers from the MIDAS Antarctic research project.