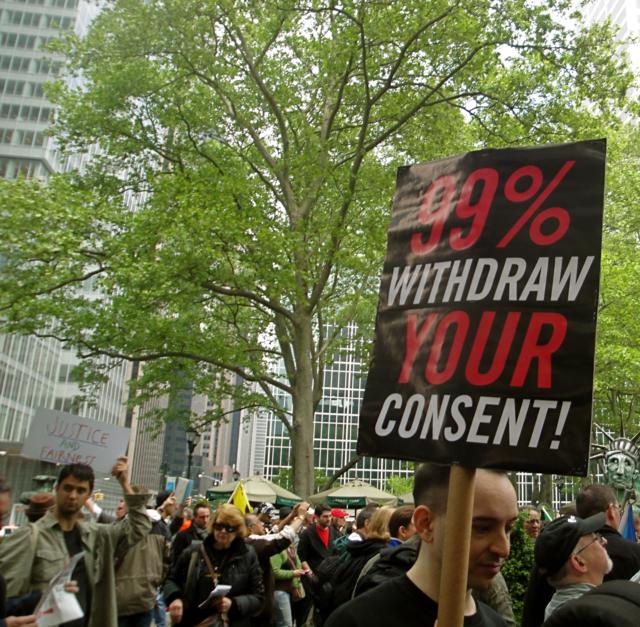 Free (sic) trade agreements have a way of altering our lives in unexpected ways. For example, thanks to something called the “trade-related intellectual property rights” section of the General Agreement on Tariffs and Trade (GATT) -- precursor to the World Trade Organization (WTO) -- when a human gene is introduced to a sheep’s mammary glands to produce a protein called alpha-1-antitrypsin, a sheep is no longer a mere “sheep.”

Instead, that woolly object is now a legally patented corporate commodity known as a “mammalian cell bioreactor.”

If you don’t like it, don’t blame me. Blame GATT. Hell, you can blame all these so-called trade agreements because they’re really all about investors’ rights anyway.

For more details on the infamous WTO, here’s an article I wrote in April of this year: “Roots of Occupy: The Battle in Seattle, 1999.”

Of course, there’s also the North American Free Trade Agreement (NAFTA) which, since the time it was enacted in 1994, the U.S. Labor Department has certified more than 2.5 million American jobs as “destroyed by either direct offshoring or displacement by imports.”

All this backroom betrayal has led us right up to what has been called “NAFTA on steroids,” potentially the mother of all free (sic) trade agreements: the Trans-Pacific Partnership or TPP.

Free Trade ain’t free... and it ain’t even trade
TPP, as described by the Citizens Trade Campaign, is a “massive new international trade pact being pushed by the U.S. government at the behest of transnational corporations. The TPP is already being negotiated between the United States, Australia, Brunei Darussalam, Canada, Chile, Malaysia, Mexico, New Zealand, Peru, Singapore and Vietnam -- but it is also specifically intended as a 'docking agreement' that other Pacific Rim countries would join over time, with Japan, Korea, China and others already expressing some interest.  It is poised to become the largest Free Trade Agreement in the world.”

“Trade is only a minor part of the agreement,” add the folks at TPP Watch, who call it “a clever branding exercise” and “an agreement that guarantees special rights to foreign investors.”

"TPP is a sweetheart deal for corporations who profit from hydrofracking, toxic dumping, mining, and the destruction of rainforests and other endangered ecosystems,” explains Adam Weissman of the Occupy Wall Street Trade Justice Working Group.. “It grants corporate environmental destroyers the power to sue governments for unlimited sums in international tribunals for enforcing their environmental laws. Outrageously, corporations can sue not only to recoup their investments, but can demand compensation for all the money they might have made if they weren't stopped from damaging the environment."

How will all this -- and more -- be possible? Under TPP, details Public Citizen, corporations would gain an array of privileges, e.g.

Such an agreement would also give animal agribusiness the opportunity to pressure countries to eliminate import safety standards and eliminate tariffs on U.S. meat, dairy, and egg exports.

To add insult to injury, under the auspices of TPP, the United States. is actively seeking to cut access to medicine in the name of boosting Big Pharma profits.

Those of you in the “lesser (sic) evil” crowd please note that both wings of the one American corporate party are swooning over TPP.

"President Obama is slamming Mitt Romney for refusing to release his taxes and for offshoring jobs at Bain Capital,” Weissman adds, “but the Obama administration is negotiating and refusing to release the text of the Trans-Pacific Partnership, an 11-country international outsourcing agreement that makes Bain look like a bunch of amateurs by comparison."

You down with TPP?
All right, now that you’ve heard some (key word: some) of the sordid details, you might be wondering what -- if anything -- can stop TPP from becoming a rapacious reality.

If you think NAFTA and GATT were the stuff of nightmares, the Multilateral Agreement on Investment (MAI) was a plot, cloaked in secrecy, designed to essentially eliminate those pesky nation-to-nation boundaries that stop our poor, neglected multinational corporations from competing in the global marketplace.

U.S. CEO at the time, Bill Clinton, failed in his effort to fast-track MAI in 1997, but it was back on the table a year later. If implemented, the MAI would’ve granted trans-national corporations a unique brand of sovereignty that superseded national borders.

However, by April 1998, MAI had been soundly defeated thanks to perhaps the first ever Internet activist campaigns -- a campaign that mobilized some 20 million people to speak out against and stop this global nightmare.

(Subsequently defeated by sustained public action: the “Millennial Round” of the WTO in 1999 and The Free Trade Area of the Americas (FTAA) in 2003.)

Like all battles against the 1%, the odds are long and the game is tilted in their favor, but it’s powerful to remember that:

We can begin by educating ourselves and the general public about the avaricious agenda of the 1%. Let’s spread the word that TPP isn’t an arcane exercise in D.C. double-talk. It will directly affect us -- from access to medicine, a lack of food safety, more jobs lost, a faster rate of climate change, and too many more ways to list here.

Of course, we can and should go the usual route, the methods that beat back MAI, FTAA, etc. -- letters, petitions, etc. -- but I think if we also occupy a major effort towards public outreach, we stand a better chance.

If we can relentlessly and effectively expose how this deceptive design is whitewashing our past, oppressing our present, and jeopardizing our future, it would not only help us defeat TPP but also inspire others to more easily recognize the big connections.

In 1998, one activist said MAI was “like a political Dracula” which “simply cannot survive sunlight.” It’s our job, our duty to the future, to let the sun shine brightly on TPP and collectively drive a stake through its gluttonous heart.

So... I’ve laid out some of the details above and now I put it to you: What can/should we do about TPP? What are you willing to do and how soon will you do it? Post comments here or e-mail me (This email address is being protected from spambots. You need JavaScript enabled to view it.) with your ideas.

But then again, what do I know? I’ve always been the black mammalian cell bioreactor in my family.