Towards a World Without 'Veterans' | Mickey Z. 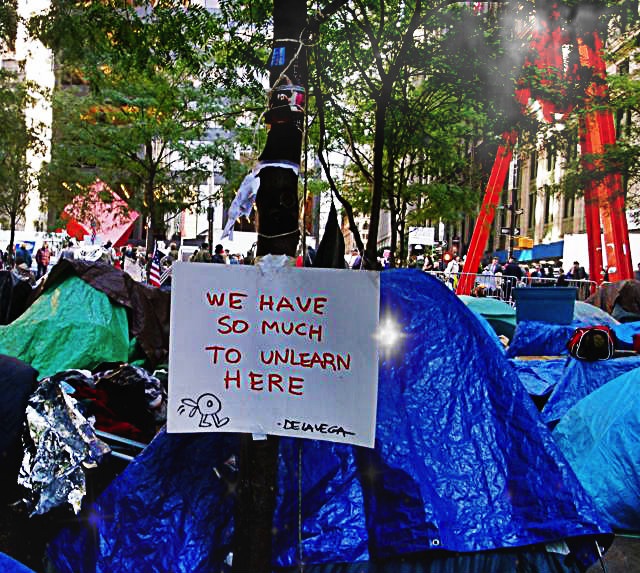 “In the sad aftermath that always follows a great war, there is nothing sadder than the surprise of the returned soldiers when they discover that they are regarded generally as public nuisances. And not too honest.”

Yet again, some U.S. war veterans were recently arrested at a protest and yet again, a mega-amount of outrage was displayed by their fellow activists. It’s as if these arrests are somehow more “shocking” or “important” than all the other endless examples of state repression.

While I completely respect and admire anyone recognizing they’ve been duped and thus embarking on a new enlightened path, I see no reason why such a person deserves more esteem than any other activist. In fact, call me crazy, but I’m far more impressed by comrades who already see past the American Dream façade -- and didn’t need a walk on the dark side to do so.

One friend explained her sharing of the recent veteran arrest story as a way to show her mainstream friends that now, not even veterans are safe from the cops. While I can understand how this rationale came to be, I told her that she’d just inspired a new article because...

From Shays Rebellion in 1787 to the quarter-million homeless vets today, generation after generation of U.S. military personnel has suffered at the hands of the government they allegedly defended with their lives.

The American soldiers who fought in World War I, for example, were no exception.

In 1924, WWI vets were voted “Adjusted Compensation” by Congress: $1.25 for each day served overseas, $1.00 for each day served in the States. To the "doughboys,” it was seen as a bonus. Veterans owed $50 or less were paid immediately. Everyone else was given a certificate that would collect 4 percent interest with an additional 25 percent tacked on upon payment. However, there was a catch: the certificate was not redeemable until 1945… and a little something called “The Depression” was looming over the horizon.

But, before exposing the lack of support shown to WWI vets, it’s useful to examine how they ended up on the battlefields of Europe in the first place.

In what has been called "perhaps the most effective job of large-scale war propaganda that the world has ever witnessed," the United States created a Committee on Public Information. Run by veteran newspaperman George Creel, it used all available forms of media to promote the noble purpose behind WWI, e.g. to make the world safe for democracy.

The Creel Committee (as it came to be known) was the first government agency for outright propaganda in U.S. history; it published 75 million books and pamphlets, had 250 paid employees, and mobilized 75,000 volunteer speakers known as "Four Minute Men," who delivered their pro-war messages in churches, theaters, and other places of civic gatherings. The idea, of course, was to give war a positive spin.

For the entire 19 months America took part in the first war to end all wars, the U.S. government prohibited publication of any photographs showing dead U.S. soldiers. Before any of those invisible Americans could actually get dead, the nation had to be convinced that doing their part in a campaign of organized mass butchery was a neat idea. "It is not merely an army that we must train and shape for war," President Woodrow Wilson declared at the time, "it is an entire nation."

The age of manipulated public opinion had begun in earnest.

Although Wilson won reelection in 1916 on a promise of peace, it wasn't long before he severed diplomatic relations with Germany and proposed arming U.S. merchant ships -- even without congressional authority. Upon declaring war on Germany in December 1917, the president proclaimed, "conformity will be the only virtue and any man who refuses to conform will have to pay the penalty."

At the ready to dish out any such penalties were groups like the American Protective League, a nationwide association of 100,000 who, during the war, conducted 40,000 "citizen arrests" of anyone they deemed a subversive. Academia did its part by firing teachers who dared to question the war effort. College professors were dismissed for merely suggesting that both good and bad German people exist, as in any other group

Nicholas Murray Butler was president of Columbia University during the war. "I say this with all possible emphasis," he declared, "that there is no place in Columbia University for any person who acts, speaks, or writes treason. This is the last warning to any among us who are not with whole heart, mind, and strength committed to fight with us to make the world safe for democracy."

In time, the masses got the message and reached a fever pitch of so-called patriotism:

One of the men “inspired” by this nefarious effort to enlist was Joe T. Angelo of Camden, N.J. In 1918, as fate would have it, Private Angelo would end up saving the life of a certain Major George S. Patton on a battlefield in France (Angelo was Patton’s orderly). He was awarded the Distinguished Service Cross.

Against this backdrop, the question must once again be asked: Is it strange that the United States would line up opposed to its own soldiers and veterans? Ask the Bonus Expeditionary Force.

In the spring and summer of 1932, disgruntled veterans like Joe Angelo -- left broke and unemployed by the Depression -- got the idea to demand payment on the future worth of the aforementioned certificates. Anywhere from 17,000 to 25,000 former doughboys formed a Bonus Expeditionary Force (BEF), otherwise known as the “Bonus Army,” and -- bonus certificates in hand -- they marched on Washington to picket Congress and President Herbert Hoover.

While they may have fought in Europe as an integrated army, the men of the BEF did not invite Jim Crow to this battle. Arriving from all over the country, alone or with wives and children, they huddled together, mostly across the Potomac River from the Capitol, in what were called “Hoovervilles,” in honor of the president who adamantly refused to hear their pleas.

The House of Representatives passed the Patman Bill for veterans’ relief on June 15, 1932, but the bill met defeat in the Senate just two days later. More vets swarmed into the nation’s capital. Shacks, tents, and lean-tos continued to spring up everywhere, and the government and newspapers decided to play the communist trump card for the umpteenth time.

Despite the fact that the BEF was made up of 95 percent veterans, the entire group were labeled “Red agitators” -- tantamount to declaring open season on an oppressed group of U.S. citizens. Right on cue, Hoover called out the troops… led by three soon-to-be textbook heroes.

The commander of the operation was Army Chief of Staff Douglas MacArthur, who branded the BEF traitors bent on overthrowing the government… declaring, “Pacifism and its bedfellow communism are all around us.” MacArthur’s young aide was none other than Dwight D. Eisenhower, while Patton led the Third Cavalry -- which spearheaded the eventual eviction of the Bonus Army.

Patton shared MacArthur’s hatred of “reds” and lectured his troops on how to deal with the BEF: “If you must fire do a good job -- a few casualties become martyrs, a large number an object lesson … When a mob starts to move keep it on the run … Use a bayonet to encourage its retreat. If they are running, a few good wounds in the buttocks will encourage them. If they resist, they must be killed.”

The three military icons got their chance on July 28, 1932, when a scuffle by the BEF and D.C. police resulted in two fatally wounded veterans. The U.S. Army assault integrated four troops of cavalry, four companies of infantry, a machine gun squadron, and six tanks. When asked by BEF leader Walter Waters if the Hoovervilles campers would be “given the opportunity to form in columns, salvage their belongings, and retreat in an orderly fashion,” MacArthur replied: “Yes, my friend, of course.”

But, after marching up Pennsylvania Avenue, MacArthur’s soldiers lobbed tear gas and brandished bayonets as they set fire to some of the tents. In a flash, the whole BEF encampment was ablaze.

“Disregarding orders -- a common thread running through his career -- MacArthur decided to finish the job by destroying the Bonus Army entirely,” historian Kenneth C. Davis writes. “After nightfall, the tanks and cavalry leveled the jumbled camps of tents and packing-crate shacks. It was put to the torch.”

Two veterans lost their lives in the assault and an 11-week-old baby died from what was believed to be gas-related illness. In addition, an 8-year-old boy was partially blinded by gas, two police had their skulls fractured, and a thousand veterans suffered gas-related injuries.

In the smoldering aftermath, a dazed, rail thin Joe Angelo approached his old boss but was harshly rebuked. “I do not know this man,” Major Patton growled. “Take him away and under no circumstances permit him to return.”

The next day, the New York Times ran an article under the headline: “A Calvary Major Evicts Veteran Who Saved His Life in Battle.”

After this impressive military success, the members of the BEF were forced to leave Washington and many of them joined the other 2 million or so Americans who lived their lives on the road during the Great Depression.

“Some states, like California,” Davis notes, “posted guards to turn back the poor.”

Less than 10 years later, MacArthur, Patton, and Eisenhower would be earning a place in history books by sending many of those same disenfranchised poor to grisly deaths on the battlefields of Europe and the Pacific.

Franklin Delano Roosevelt was a candidate for president in 1932. It is said that the day after the BEF eviction, he told an aide there was no longer any need for him to campaign against Herbert Hoover. He may have been right… but his subsequent election did little to help WWI veterans. FDR not only refused to pay the bonuses; he also reappointed MacArthur as Army Chief of Staff.

Roosevelt did throw some veterans a New Deal bone when bonus seekers were given the opportunity to work in “Veterans Rehabilitation Camps” like those in the Florida Keys. There they met with an ignominious end on Labor Day 1935 when “a hurricane unlike any ever recorded in the United States” struck.

“Wind gusts estimated at 200 mph slammed into the work camps in Florida’s upper Keys, turning granules of sand into tiny missiles that blasted flesh from human faces,” write Paul Dickson and Thomas B. Allen in Bonus Army: An American Epic. “The storm brought death to at least 259 veterans. The final indignity was mass cremation.”

Bad News: The government, the corporations that fund the government, and the increasingly militarized Blue Bloc of law enforcement have never “supported” the troops. This is nothing new and activists who treat vets with awe merely reinforce this culture’s pervasive, self-destructive, and lethal military fetish.

Good News: It’s never too late to shrug off the shackles of propaganda.

“The antiwar movement has been so thoroughly discredited,” says author H. Bruce Franklin in Vietnam and Other American Fantasies. “One would never be able to guess from public discourse that for every American veteran of combat in Vietnam, there must be 20 veterans of the antiwar movement.”

The veterans of the antiwar movement are OUR troops. If you must fawn over someone, why not these brave individuals?

Suggestion: Let’s reinvent this upcoming Veteran’s Day as a way to honor all the activists who fought before us and blazed a path.

Note: To continue conversations like this, come see Mickey Z. in person on Nov. 7 in NYC for One Year After Hurricane Sandy: Activism, Solidarity, Animal Liberation.