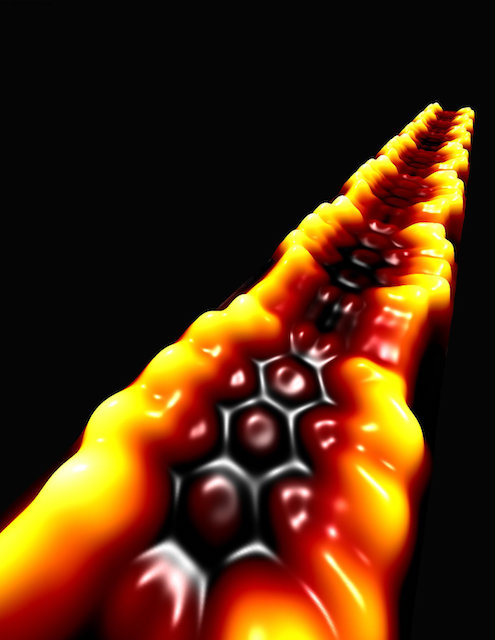 Aug. 8, 2018 (Phys.org} -- Scientists are experimenting with narrow strips of graphene, called nanoribbons, in hopes of making cool new electronic devices, but University of California, Berkeley scientists have discovered another possible role for them: as nanoscale electron traps with potential applications in quantum computers.

Graphene, a sheet of carbon atoms arranged in a rigid, honeycomb lattice resembling chicken wire, has interesting electronic properties of its own. But when scientists cut off a strip less than about 5 nanometers in width -- less than one ten-thousandth the width of a human hair -- the graphene nanoribbon takes on new quantum properties, making it a potential alternative to silicon semiconductors.

UC Berkeley theoretician Steven Louie, a professor of physics, predicted last year that joining two different types of nanoribbons could yield a unique material, one that immobilizes single electrons at the junction between ribbon segments.

In order to accomplish this, however, the electron "topology" of the two nanoribbon pieces must be different. Topology here refers to the shape that propagating electron states adopt as they move quantum mechanically through a nanoribbon, a subtle property that had been ignored in graphene nanoribbons until Louie's prediction.