Time to Take a Stand... For OUR America! | Philip A. Farruggio 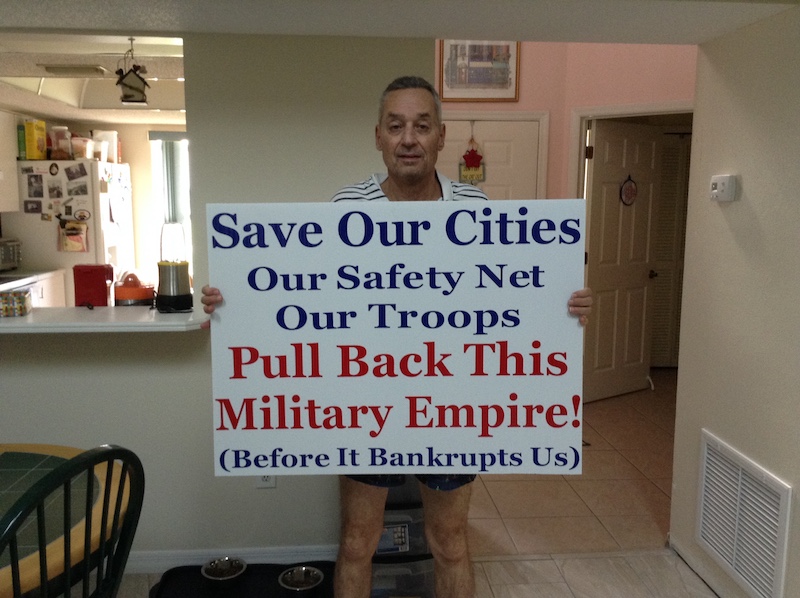 There is a wonderful line, from where I do not really know (or care), that says it all: "So much is gained when only one person stands up and says... NO!"

For those of us who see through the hype and spin of this empire, our nation is on the precipice of economic and moral ruin. This black hole or abyss runs deep, away from the "seas of reason" that founded this republic.

Sadly, it matters not, in the grand scale of things, who of this Two Party/One Party con job has the final word. Yes, the far right wing of this empire's political system is always the worst offender. Yet, looking at the other, the right of center Democratic Party wing, they too carry the water for their warmongering corporate masters.

When the mainstream media is controlled so thoroughly by the uncles, aunts and children of Gordon Gecko, we working stiffs never get the truth. Talk about "Fake News"; they decide what news we all get handed to us by their talking heads.

When was the last time you heard on the mainstream news shows (and even many so-called "independent media shows") that over HALF of your federal tax dollars goes towards military spending? Imagine how many fiscal problems could be solved if even half of that half went elsewhere?]

Name a need of choice of your own to loosen the cherished safety net, and see how much of that $150+ BILLION could be diverted that way. Imagine if the Congress acted primarily for the interests of the majority of us, how they could stop the funding of these phony wars on other nations, close most of the 1000+ foreign military bases, and send home our cherished military personnel.

It is time for we working stiffs to get out on the street corners of our towns and cities to demand change. All it takes is a well worded sign and some courage to counteract our foolish propagandized neighbors, even just for ONE HOUR a week... same time and same place.

That is how we who "know better" can better educate our fellow citizens about the truth. Try it... you may like it.

Philip A. FarruggioPhilip A Farruggio is a son and grandson of Brooklyn, New York, longshoremen. He has been a freelance columnist since 2001, with more than 300 of his essays posted on sites like Global Research, Consortium News, Information Clearing House, Nation of Change, World News Trust, Op Ed News, Dissident Voice, Counterpunch, Activist Post, Sleuth Journal, Truthout and many others. His blog can be read in full on World News Trust, whereupon he writes a great deal on the need to cut military spending drastically and send the savings back to save our cities. Philip has an internet interview show, "It's the Empire... Stupid" with producer Chuck Gregory, and can be reached at This email address is being protected from spambots. You need JavaScript enabled to view it.