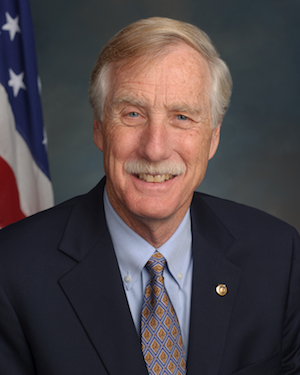 U.S. Sen. Angus King (I-ME) official portrait 113th CongressSenator Angus King is the latest in a long line of thoughtful Maine lawmakers. He talked to us about the Russia probe.

June 18, 2017 (Bloomberg) -- Looking for someone to make sense of the Washington scandals? It's always smart to turn to a senator from Maine.

In the Senate Intelligence Committee, which is looking at Russian influence on the 2016 presidential election, Maine's Susan Collins is the Republican most likely to speak up for bipartisan common sense. The most thoughtful interrogator of all has been the state's other senator, Angus King, an independent who usually votes with Democrats.

Wisdom and fortitude are Maine traditions. In 1950, Republican Margaret Chase Smith of Maine was among the first senators to take on her party's red-baiting Senator Joseph McCarthy. A couple of decades later, Representative Bill Cohen, another in the state's line of Republican moderates, was a profile in courage during Watergate before serving three Senate terms. In 1987, Senator George Mitchell, a Democrat, punctured the pious patriotism of Iran-contra culprit Oliver North.

In almost 60 years, tiny Maine has not had one undistinguished senator, something few, if any, other states can claim. If there are political genes, perhaps they're traceable to Joshua Chamberlain, a Civil War hero at the Battle of Gettysburg, for which he was awarded the Congressional Medal of Honor. He later served four terms as governor of Maine.

Q: Where are we right now?

KING: We are at this moment where what concerns me is that we're all so caught up in Trump, Comey, and Kushner, and Flynn, that it's in danger of overwhelming the real story, which is what the Russians did and tried to do. I contend that it was the most serious attack on our country since September 11, 2001. It was deliberate, it was sophisticated, it was conscious, and it was in some ways successful.

The second piece is what's been very little reported, their efforts to infiltrate state election systems, which by all accounts from the intelligence community were unsuccessful in terms of changing votes. They were practicing and experimenting.