This December 24: Have Yourself a Merry I.F. Stone Day | Mickey Z. 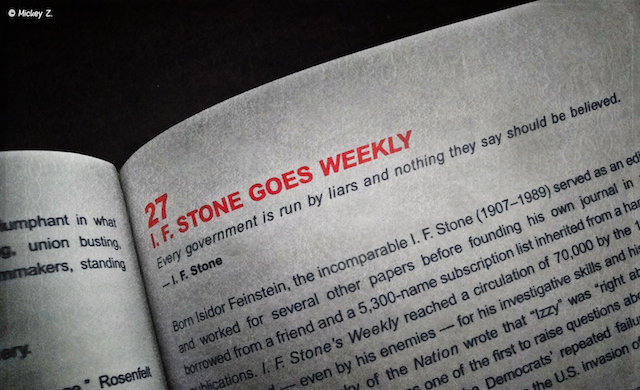 "Every government is run by liars and nothing they say should be believed."

Dec. 24 is I.F. Stone's birthday (he would have been 106).  His journalistic example is about as good a reason as any to celebrate.

Born Isador Feinstein, the incomparable I.F. “Izzy” Stone served as an editor at The Nation and worked for several other papers before founding his own journal in 1953 -- with $3,000 borrowed from a friend and a 5,300-name subscription list inherited from a handful of defunct lefty publications.

I.F. Stone's Weekly reached a circulation of 70,000 by the 1960s and Stone was widely praised -- even by his enemies -- for his investigative skills and his ability to see through the hype.

Victor Navasky of The Nation wrote that Izzy was "right about McCarthyism, right about the war in Vietnam (he was one of the first to raise questions about the authenticity of the Gulf of Tonkin incident), right about the Democrats' repeated failure to live up to their own principles, right about what he called, long before the U.S. invasion of Iraq, the 'Pax Americana.'"

"I. F. Stone was the modern Tom Paine -- as independent and incorruptible as they come," wrote Ralph Nader. "Notwithstanding poor eyesight and bad ears, he managed to see more and hear more than other journalists because he was curious and fresh with the capacity for both discovery and outrage every new day."

Without high-placed sources or invitations to the big press conferences, Stone scooped the big name reporters time and time again. He scoured public documents, studied the transcripts of Congressional committee hearings, and searched the large newspapers for inspiration.

According to Navasky, Stone "once told David Halberstam that the Washington Post was an exciting paper to read 'because you never know on what page you would find a page-one story.'"

"What Stone never talked about was the effect he had on many reporters who, often without attribution, 'lunched off' his scoops," said Nader.  "He taught them courage and insistence without ever meeting them ... while others in his profession cowered, he stood tall to challenge the abusers of power no matter where they came from -- right, middle or left."

Reminder: The pervasive and willful distribution of misinformation is typical of life within a society dominated by a corporate-run press.

Whether you label them liberal or conservative, most major media outlets are large corporations owned by or aligned with even larger corporations, and they share a common strategy: selling a product (an affluent audience) to a given market (advertisers).

Therefore, we shouldn’t find it too shocking that the image of the world being presented by a corporate-own press very much reflects the biased interests of the elite players involved in this sordid little love triangle.

This is why when the Dow Jones Industrial Average drops, it makes headlines. But if the global extinction rate rises, it’s questionable if it'll even make the papers (and if it does, as Stone hinted at, it’ll be buried in a small item on page 23).

If you created a blueprint for an apparatus that utterly erased critical thought, you could make none more efficient than the American corporate media -- and please don't fall into the trap of only demonizing Fox News.

A major component of the free press illusion is the notion that some media outlets are more liberal while others are more right wing. Widespread belief in this myth further limits the already limited parameters of accepted debate.

Reality: The media are as liberal or conservative as the corporations that own them.

In an attempt to explain why he risked his career and ventured out on his own to create the Weekly, I.F. Stone explained:

"To give a little comfort to the oppressed, to write the truth exactly as I saw it, to make no compromises other than those of quality imposed by own inadequacies, to be free to follow no master other than my own compulsions, to live up to my idealized image of what a true newspaperman should be, and still be able to make a living for my family. What more could a man ask?"

The Moral of This Story: Be. Your. Own. Media.

Note: To continue conversations like this, come see Mickey Z. in person on Jan. 11 at Bluestockings Bookstore in NYC.