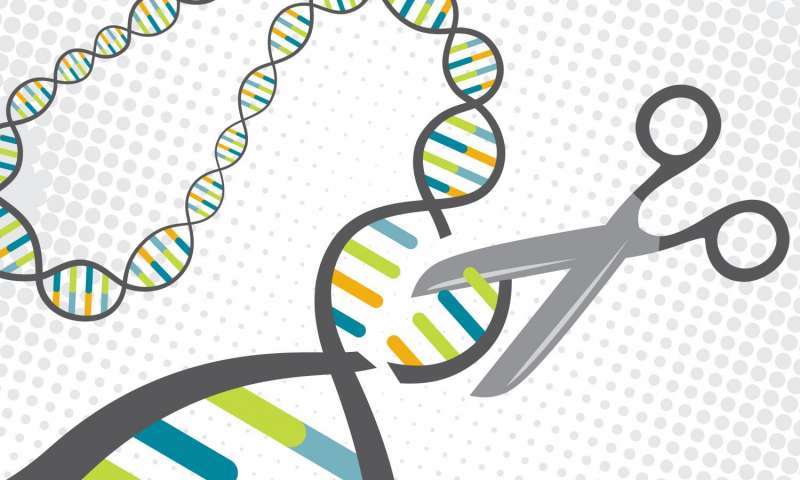 A CRISPR protein targets specific sections of DNA and cuts them. Scientists have turned this natural defense mechanism in bacteria into a tool for gene editing. Credit: Jenna Luecke and David Steadman/Univ. of Texas at Austin Read more at: https://phys.org/news/2017-06-technique-enables-safer-gene-editing-therapy.html#jCp

Everything you need to know about how scientists can repurpose a bacterial immune system to alter DNA, making everything from cheap insulin to extra starchy corn.

April 27, 2018 (Wired) -- IN THE EARLY days of gene editing, biologists had a molecular toolkit that was somewhat akin to a printing press. Which is to say, altering DNA was a messy, labor-intensive process of loading genes onto viruses bound for target cells. It involved more than a fair amount of finger-crossing.

Today, scientists have the genetic equivalent of Microsoft Word, and they are beginning to edit DNA almost as easily as software engineers modify code. The precipitating event? Call it the Great Crispr Quake of 2012.

If you’re asking, “what’s Crispr?” the short answer is that it’s a revolutionary new class of molecular tools that scientists can use to precisely target and cut any kind of genetic material. Crispr systems are the fastest, easiest, and cheapest methods scientists have ever had to manipulate the code of life in any organism on Earth, humans included.

The long answer is that Crispr stands for Clustered Regularly Interspaced Palindromic Repeats. Crispr systems consist of a protein with sequence-snipping capabilities and a genetic GPS guide. Such systems naturally evolved across the bacterial kingdom as a way to remember and defend against invading viruses. But researchers recently discovered they could repurpose that primordial immune system to precisely alter genomes, setting off a billion-dollar boom in DNA hacking.

Every industry is throwing mad money at Crispr -- pharma, agriculture, energy, materials manufacturing, you name it. Even the weed guys want in. Companies are using it to make cancer-curing medicines, climate-change-fighting crops, biofuel-oozing algae, and self-terminating mosquitoes. Academic researchers have almost universally adopted Crispr to more deeply understand the biology of their model organisms. Supporting this biohacking bonanza is an increasingly crowded Crispr backend supply chain; businesses building gene-editor design tools and shipping synthetic guide RNAs or pre-Crispr’d cell lines to these companies’ doors. So far, though, very few Crispr-enhanced products have made it into the hands of actual consumers. In their place, hyperbolic headlines have bugled society’s greatest hopes and fears for the technology, from saving near-extinct species to igniting a superbaby arms race.

Crispr isn’t going to end disease or hunger or climate change any time soon. Maybe it never will. Nor is it about to deliver designer children or commit genetic genocide. (Though it’s never too early to start talking about the ethical dilemmas such a powerful technology could pose.) Crispr is, however, already beginning to reshape the physical world around us in much less radical ways, one base pair at a time.