BOOKS: The Witch Of Hebron And The Myth Of Post-Peak Uniformity (Carolyn Baker) 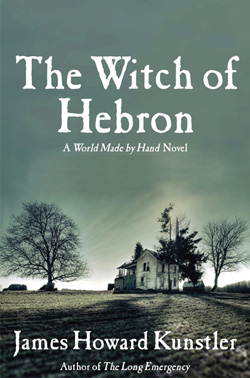 Oct. 13, 2010 (CarolynBaker.net) -- I am an avid fan of James Howard Kunstler's work. Whether I read his non-fiction The Long Emergency of 2005 or his recent novels A World Made By Hand and The Witch of Hebron, I remain in awe of his capacity for discerning a world eviscerated by unprecedented energy depletion and economic cataclysm.

Kunstler's non-fiction research on the likely consequences of peak oil is superbly documented and therefore, exceedingly plausible. His fictional pieces are as astonishingly engaging as they are deeply disturbing.

His most recent masterpiece is The Witch of Hebron which, like his 2007 novel A World Made By Hand, is set in upstate New York where Kunstler has spent most of his life and paints a bleak but beautiful and strangely riveting picture of life in a small community, Union Grove, after the collapse of industrial civilization. Remarkable indeed is the resourcefulness of a population that has been traumatized by cataclysmic events, some of which have occurred over time, others which erupted suddenly.

Having researched, as Kunstler has, the likelihood of industrial civilization's demise, I find the fictional world depicted in his novels highly plausible and not the least bit exaggerated. He has masterfully created a mood that is eerily beautiful and beautifully eerie. Yet one cannot help but marvel at the serene contentment of most of Union Grove's residents even as they are surrounded by a milieu of unremitting death and dissolution.

Kunstler's capacity for illustrating the heartwarming alongside the horrific is nothing less than uncanny. While he may not agree, he has clearly depicted a world in which the sacred elements of humanity have not been decimated and are exquisitely demonstrated by acts of unpredictable and fortuitous compassion.

Take it from someone who rarely reads fiction: A World Made By Hand and The Witch of Hebron are nothing less than spellbinding.

My enchantment in reading both novels, however, has been profoundly subdued by Kunstler's disappointing portrayal of women. All female characters without exception are either spouses or partners of males or are in some way engaged in the world's oldest profession. The witch of Hebron, herself a prostitute, is a beautiful, charming, intelligent caricature, overly-idealized by Kunstler who argues that in a post-collapse world, the rights of women and minorities, so dramatically achieved in the twentieth century, will become virtually extinct in a "world made by hand."

Kunstler is remarkably dogmatic (as the dictionary defines it: "inclined to lay down principles as incontrovertibly true") in both his fictional depiction of women and in his perspective in the Long Emergency regarding regions of the United States that are more or less likely to successfully navigate industrial civilization's demise. Not surprisingly, it is the Northeastern region which Kunstler finds most potentially livable in the aftermath of the unraveling. Of this area he opines that "...the region possesses the residue of a preindustrial or protoindustrial civic infrastructure, based on established habits of group covenant and, ultimately, a respect for the rule of law."

Like Kunstler, I believe that the collapse of industrial civilization is certain and that it will be profoundly shattering to individuals and institutions. However, the assertion that all humans in all places will revert to barbaric, pre-humanistic interaction as if the twentieth century never occurred, is absurdly implausible -- as is the assumption that the demise will unfold uniformly in every venue in the same manner.

In a "world made by hand" it is very likely that some indigenous people and some indigenous women in particular will survive and thrive and will offer their ancient survival wisdom to others in their milieu. Likewise, surviving women professionals of all ethnicities in small communities emerging in the aftermath of collapse are as likely as males to provide essential services such as nursing, law, and the operation of local general stores. I would fully expect to see myriad "Union Groves" emerging throughout the United States, perhaps in places most unlikely to Kunstler, demonstrating aspects of diversity that a stupendous but somewhat myopic author is not yet capable of imagining.

Carolyn Baker is the author of Sacred Demise: Walking The Spiritual Path of Industrial Civilization's Collapse (2009) and manages her website at http://www.carolynbaker.net/.