The Veggie Pride Talk I Didn’t Give | Mickey Z. 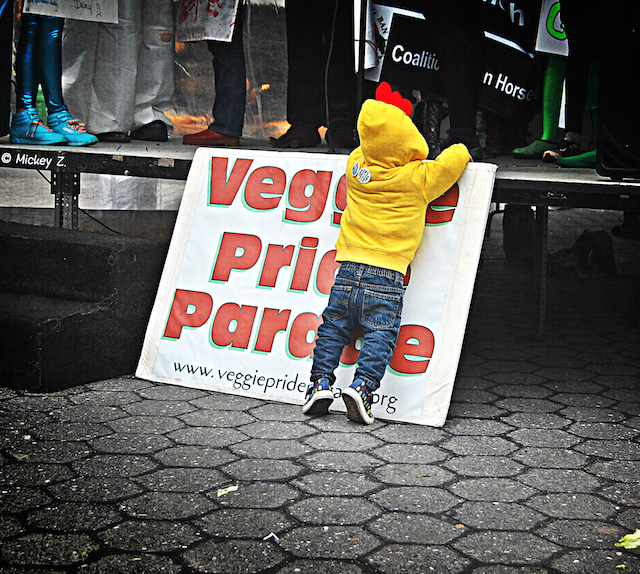 For the first time in many years, I’ve declined an offer to be the lead speaker at the annual Veggie Pride Parade in NYC’s Union Square Park. I learned the hard way that although the cheers have been loud, the local vegan/animal rights scene wasn’t actually hearing me. Since I’ve opted to no longer howl into an echo chamber, I’ll share my thoughts here instead.

Here we are... again. Same place, same signs, same chants, pretty much all the same people. So, what’s changed? Last year, from this stage, I declared there’d be no carriage horse industry in New York City by now. As you all know, those horses are still being exploited and abused just about 40 blocks uptown from where we stand.

We did get an empty promise from Ringling that they’d free their captive elephants in -- wait for it -- three years. Sounds like excellent marketing to me. “Step right up and see the elephants before they’re gone!” Ticket sales boom and then, by “popular demand,” the elephants remain in the show well beyond three years.

I could go on but I think you get the idea. The same people using the same tactics quite predictably provide the same lack of results. Which brings me to the changes that have taken place in the realm of activism. Since last year at this time, a powerful new movement has emerged from coast to coast. Maybe you’ve heard of a little something called Black Lives Matter.

Yeah, I know what most of you are thinking: “Oh no, here he goes again” and, of course: “All lives matter!” It’s quite illustrative to witness how quickly animal rights activists assume that any mention of human rights means someone is “ignoring” the animals or trying to “co-opt” the movement. Such a single issue mindset contributes mightily to the perception of animal liberation as a fringe concern.

But, perhaps you wonder, why should Black Lives Matter matter to vegans and animal rights activists? If we could deactivate our egos long enough, we’d recognize the simple, frightening reality that we’re losing. Big time. The war against non-humans has not only continued, it’s intensified. We rant all day, every day about our undying commitment to the animals but when will we accept that we cannot help these animals until many more committed humans join the struggle?

Yet, in person, on social media, everywhere… I witness AR activists hating on humans, calling for population control or even human extinction, and never crossing over into human rights activism. In fact, I often encounter AR activists literally mocking those who engage in actions against human oppression.

The vast majority of AR activists are middle class or upper middle class, able-bodied, and white.

In the realm of AR activism, our numbers are stagnant and we remain relegated to the fringes -- not just in mainstream society but also within activist circles.

Oppressed communities have every reason to distrust any movement made up primarily of middle class white people.

If we do not connect our struggle against speciesism to other anti-oppression struggles, we are failing ourselves, failing our fellow humans, and failing the non-human animals in a major way. Unless we do the work to meet other activists where they are, we’re doomed.

Yes, environmentalists who eat animals -- an industry that stands as a top source of human-created greenhouse gases -- are behaving hypocritically.

Yes, humans who worship their “pets” but eat and wear a wide array of other animals are behaving hypocritically.

Yes, activists whose idea of liberation only includes one of the 8.7 million known animal species are behaving hypocritically.

But also yes, vegans who talk of freedom and compassion yet reject intersectionality are behaving hypocritically.

Amid all this hypocrisy, I have an idea: how about we start demonstrating some of that compassion we’re always bragging about?

Let’s say you attend a Black Lives Matter rally. You get there on foot, by bicycle, or by public transportation; you packed your vegan lunch; and you're wearing animal-free clothing. The first person you encounter is a single mother who was inspired to take her first activist steps because she worries that her young son will be targeted by the NYPD. All is going well until you look down and discover that your new friend is wearing UGGs. Hmm… what to do?

You could leave, label the entire movement a fraud, and spend hours on Facebook venting your formidable rage

You could attack or mock the woman for being so “ignorant” and “callous” about animal cruelty perhaps driving her to leave, label the entire movement a fraud, and spend hours on Facebook venting her formidable rage

Or you could choose process over purity and accept that humans are complex and activist movements are exponentially more complex, and your new friend not only may be receptive to learning about animal issues, but she will likely teach you a thing or twenty in the meantime.

Reminder: Committed activism means being a teacher and a student at the same time.

Another reminder: Becoming a vegan and animal rights activist does not complete you or help you corner the market on compassion and awareness.

Veganism is not a righteous path towards a singular focus on non-humans. Rather, it’s a journey capable of teaching us invaluable lessons about recognizing and challenging oppression in its myriad forms.

Opting for a vegan/AR lifestyle is but one component of a radical worldview. However, this planet-friendly gesture can be rendered virtually meaningless without an active connection to other struggles against oppression, e.g. patriarchy, misogyny, racism, white supremacy, ableism, sexism, homophobia, transphobia, classism, ageism, hetero-normativity, and so much more.

De-occupy your ego, choose intersectionality, learn to listen, and consciously embrace this enduring activist truth: All of our grievances and all of our solutions are connected.

On that note, I say: Peace and power to all species…

The Veggie Pride Talk I Didn’t Give by Mickey Z. is licensed under a Creative Commons Attribution-ShareAlike 4.0 International License.
Based on a work at http://worldnewstrust.com/the-veggie-pride-talk-i-didn-t-give-mickey-z.