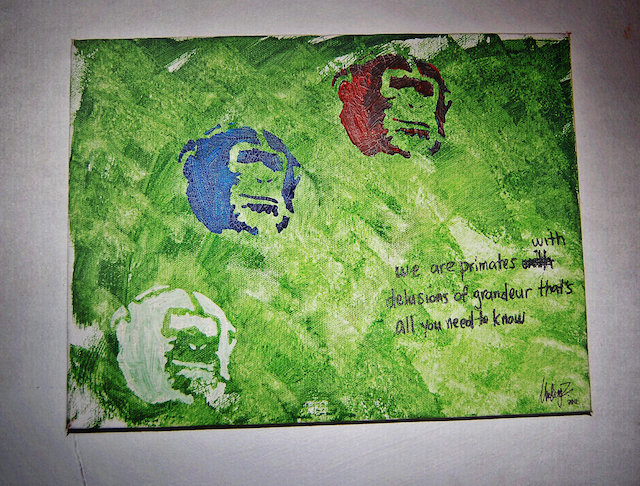 (To follow is an excerpt from Occupy this Book: Mickey Z. on Activism, which can be ordered here.)

One "debate" that never seems to end centers around the vague concept of "diversity of tactics" - a discussion that fast devolves into a purity pissing match between those who claim to be pacifists and those who claim undying devotion to direct action—with virtually no middle ground.

My take: Debating violence vs. non-violence in today's culture is like debating wetness vs. dryness as you ride the Titanic to the bottom of the ocean.

To all those who identify as pacifists, I submit:

The vast majority of "food" we eat results from unspeakable animal cruelty, environmental devastation, and the use of exploited human labor. This "food" contains toxins and chemicals and pesticides and GMOs that rain violence down upon ourselves and all living things and the system that controls access to such "food" perpetrates the daily - hourly - brutality of poverty. Every single bite you take contains the not-so-hidden ingredient of extreme, lethal violence.

But you practice Ahimsa?

The clothes we wear and the gadgets we worship also contain myriad toxins and these ubiquitous items are usually manufactured by the equally ubiquitous sweatshop labor, prison labor, child labor, and slave labor.

Yet you're the non-violent type?

The products we use to clean (sic) ourselves and our homes don't just contain toxins, they are toxins sold in toxic packaging - and they typically involve the scientifically specious and morally indefensible practice of animal experimentation.

And you shudder in horror at the mere mention of diversity of tactics?

Every time you flick on a light switch, you can thank the mining companies literally blowing the tops off mountains to reach coal and then dumping the toxic waste into the valleys below, polluting the headwaters of rivers that provide drinking water to millions of earthlings. (Other violent energy options: fracking, nuclear plants, tar sands, off-shore drilling, etc.)

Meanwhile, your life is peaceful?

Do you live in America and pay taxes? If so, you are not only funding all I've mentioned above (and much more) but also the well-armed Blue Bloc of law enforcement from sea to shining sea - and their Prison-Industrial Complex accomplices. You help finance the criminal regimes we call "allies," all across the globe. Then, of course, roughly half of your tax dollars are openly used to subsidize the most violent institution on the planet: the U.S. Department of Defense (sic).

Still... somehow... you remain a pacifist?

Reality: We are not yet in position to influence the parameters of this struggle we're engaged in. You may opt to call yourself "non-violent," but that designation will do nothing to stop the other side from using force—often in your name. The 1% has relied on violence for centuries and will continue to do so until it runs out of weapons.

To claim pacifism is to ignore the implicit daily violence of modern human culture. The primary reason why so many of us play along with the current system (pay for food and water, pay rent, etc.) and often tolerate the intolerable (toxins in our food, reduced civil liberties, etc.) is because if we didn't, we'd eventually face violence from the State (eviction, arrest, detainment, prison, etc.).

Taking things to an even more interconnected view, simply using a computer to type this article means I've agreed on some level to the mining of coltan (a major component of computer circuitry) by child labor in the Democratic Republic of the Congo where mining profits are used to fund a ruthless and bloody civil war and the ongoing slaughter of the world's largest primate (Eastern Lowland Gorilla) to make room for coltan mines.

Every keystroke I make is an act of violence.

I could go on (the examples are virtually without limit) but it's easier to sum up for now: Industrial civilization is built on and based on and functions on overt and covert violence. Any discussion of non-violence that ignores this reality is an exercise in deep denial.   Before you run and tell MLK on me, please note that I'm not advocating violence. Then again, I'm not advocating non-violence. The only thing I'm advocating is that members of the 99% maintain a big picture purpose, holistic solidarity, and a commitment to a wide range of sustained actions. We need a far more holistic view of our culture in order to pursue a far more holistic approach to change.

Successful activism is never either/or. When allies bicker over tactics, you can be certain vanity is ruling the day. Whether you want to sign petitions or engage underground direct action, go right ahead—but please understand that such diversity of tactics advances the cause.

Please also understand that deriding others for not adhering to your finely tuned sense of purity (violent, non-violent, or whatever) is more about soothing your ego than about creating the changes we all seek.

Let's say you're a handy man/woman/person and you get hired for a job. I'm guessing you'd bring your full toolbox to the worksite. After all, you can never be sure what'll pop up and what tools you might need. In other words, if you have a job to do, it would be self-defeating to decide beforehand that certain tools are off limits, no matter what. Keep all your tools at your disposal - even if some remain permanently untouched - just in case.

As for tactics, why not let each activist decide which implement best suits her or his style? There's so much work to be done so please, stop worrying about what everyone else is or isn't doing. Let’s all perform a daily ego-check and focus on the urgent tasks at hand.

It's a long and exhilarating road ahead. Choose process over purity.

Note: To continue conversations like this, come see Mickey Z. in person at Hunter College on March 26.