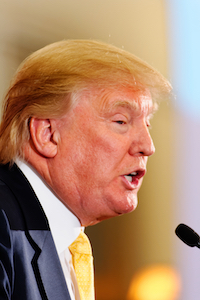 Donald Trump at the First In Nation Republican Leadership Summit, Nashua, New Hampshire. Photo by Michael Vadon, Flickr (CC BY-SA 2.0)Oct. 25, 2018 Issue (The New York Review of Books) -- As a historian specializing in the Holocaust, Nazi Germany, and Europe in the era of the world wars, I have been repeatedly asked about the degree to which the current situation in the United States resembles the interwar period and the rise of fascism in Europe. I would note several troubling similarities and one important but equally troubling difference.

In the 1920s, the United States pursued isolationism in foreign policy and rejected participation in international organizations like the League of Nations. America First was America alone, except for financial agreements like the Dawes and Young Plans aimed at ensuring that our “free-loading” former allies could pay back their war loans. At the same time, high tariffs crippled international trade, making the repayment of those loans especially difficult. The country witnessed an increase in income disparity and a concentration of wealth at the top, and both Congress and the courts eschewed regulations to protect against the self-inflicted calamities of free enterprise run amok. The government also adopted a highly restrictionist immigration policy aimed at preserving the hegemony of white Anglo-Saxon Protestants against an influx of Catholic and Jewish immigrants. (Various measures barring Asian immigration had already been implemented between 1882 and 1917.) These policies left the country unable to respond constructively to either the Great Depression or the rise of fascism, the growing threat to peace, and the refugee crisis of the 1930s.

Today, President Trump seems intent on withdrawing the United States from the entire post–World War II structure of interlocking diplomatic, military, and economic agreements and organizations that have preserved peace, stability, and prosperity since 1945. His preference for bilateral relations, conceived as zero-sum rivalries in which he is the dominant player and “wins,” overlaps with the ideological preference of Steve Bannon and the so-called alt-right for the unfettered self-assertion of autonomous, xenophobic nation-states -- in short, the pre-1914 international system. That “international anarchy” produced World War I, the Bolshevik Revolution, the Great Depression, the fascist dictatorships, World War II, and the Holocaust, precisely the sort of disasters that the post–World War II international system has for seven decades remarkably avoided.

In threatening trade wars with allies and adversaries alike, Trump justifies increased tariffs on our allies on the specious pretext that countries like Canada are a threat to our national security. He combines his constant disparagement of our democratic allies with open admiration of authoritarians. His naive and narcissistic confidence in his own powers of personal diplomacy and his faith in a handshake with the likes of Vladimir Putin and Kim Jong-un recall the hapless Neville Chamberlain (a man in every other regard different from Trump). Fortunately, the United States is so embedded in the international order it created after 1945, and the Republican Party and its business supporters are sufficiently alarmed over the threat to free trade, that Trump has not yet completed his agenda of withdrawal, though he has made astounding progress in a very short time.

A second aspect of the interwar period with all too many similarities to our current situation is the waning of the Weimar Republic. Paul von Hindenburg, elected president of Germany in 1925, was endowed by the Weimar Constitution with various emergency powers to defend German democracy should it be in dire peril. Instead of defending it, Hindenburg became its gravedigger, using these powers first to destroy democratic norms and then to ally with the Nazis to replace parliamentary government with authoritarian rule. Hindenburg began using his emergency powers in 1930, appointing a sequence of chancellors who ruled by decree rather than through parliamentary majorities, which had become increasingly impossible to obtain as a result of the Great Depression and the hyperpolarization of German politics.