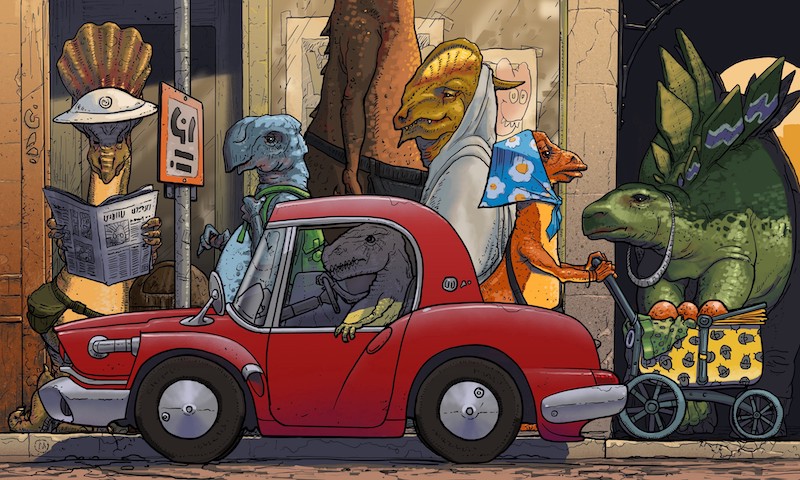 What geological traces could have left a hypothetical industrial civilization that flourished and disappeared many millions of years ago?

July 27, 2020 (The Startup) -- As far as we know, Earth is the only planet on which life has existed and exists. And it is also the only planet known to us to have given rise to at least one industrial civilization, ours.

A civilization of this kind, made up of beings capable of using external sources of energy -- such as fossil fuels or solar energy -- on a global scale, has existed on our planet for no more than three centuries. Its origin dates back to the Industrial Revolution, which has provided the means to transform local economies into a highly integrated system, capable of ensuring mass production of an ever-growing number of goods and the ability to alter the environment globally.

As members of the only known industrial civilization, we face alone, at least for now, two vast immensities: space and time.

The rapid disappearance of the traces of the past

As far as space is concerned, we know with reasonable certainty that, at least from here to Pluto, there is no other industrial civilization (and not even any apparent sign of life) outside the Earth. This conclusion is supported by the large amount of data collected by the many probes that we have sent so far across the solar system.

If other civilizations exist beyond Pluto, we can only imagine it, but our ignorance in this regard is total. Of course, we know that there are many, many planets that orbit stars other than the Sun. In just over two decades, thousands of them have been discovered, thanks to the Kepler space telescope and other sophisticated instruments. From the ratio between the number of extrasolar planets discovered so far and the total number of stars observed, we can infer that there are probably more than 10 billion habitable planets only in the Milky Way. Too many even to count them.

But there is a big issue with them. Those planets are all out of our reach and by a lot. With the technical means available today, we can at best discover some element in the atmospheric composition of an extrasolar planet not too far from Earth. Next-generation telescopes such as the JWST and the ELT will even detect the presence of any atmospheric biomarkers, such as methane and oxygen. But seeing the signs of industrial civilization on planets distant tens, hundreds, or even thousands of light-years from us is, for now, something belonging to the realm of science fiction. The only chance to breach this abysmal wall of ignorance would be to pick up an intelligent signal of some kind, which the SETI project has been trying to do for decades, but unfortunately without success, at least so far.

Exploring the space abysses in search of another industrial civilization is, therefore, an arduous undertaking. But it is equally challenging to carry out the same search through the time abyss, even without moving from Earth. We know from fossil records that complex life forms have evolved on our planet since over 500 million years ago. We also know that evolution does not proceed linearly, but follows a rough path that passes through life explosions and mass extinctions. We also know that many ‘technical’ solutions to explore and manipulate the environment -- such as eyes and wings -- have been ‘invented’ several times over millions of years by entirely different species, in response to similar evolutionary pressures.

There is then a question to ask, seemingly bizarre, but quite reasonable: is it possible that some other intelligent species existed on Earth in the distant past that created an industrial civilization somewhat analogous to ours? And another question immediately arises from this question: if another industrial civilization ever existed, what geological traces do we have to look for to prove its existence?

READ MORE: Medium
back to top