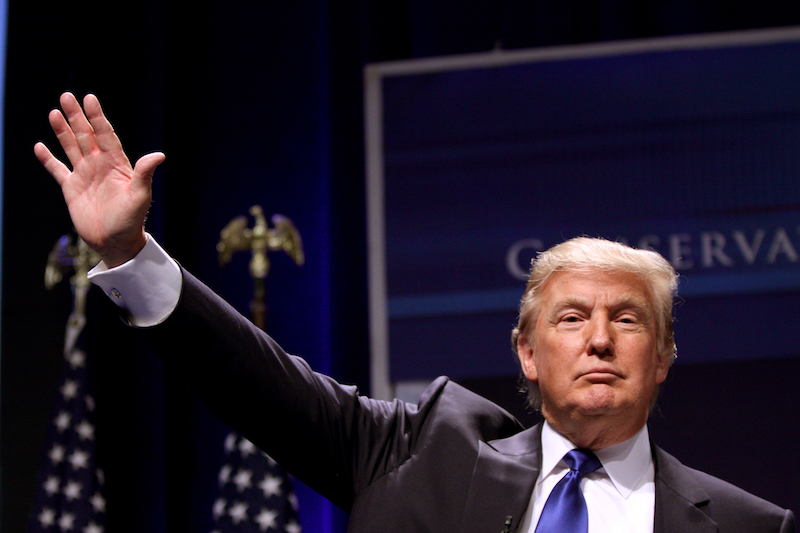 What if I told you about a nativist rally in which a charismatic white man drew a massive crowd of avid followers, using hate speech to whip them into a racist frenzy before pledging to cleanse America of a foreign threat -- all while 1,300 local policemen stood guard outside the building?

However, the particular event I refer to took place on Feb. 20, 1939, at Madison Square Garden where 22,000 frenzied members of the German-American Bund cheered Fritz Kuhn as he stood before a 30-foot high portrait of George Washington flanked by black swastikas, leading them in a chant of “Free Amerika!”

A U.S. citizen who served in the German Army during WWI, Kuhn stirred up his loyal supporters by “explaining” how both Lenin and J. P. Morgan were Jewish and Franklin Delano Roosevelt’s real name was “Rosenfeld.” (Other Kuhn-spread rumors were often aimed at the high-profile First Lady, e.g. Eleanor gave the president gonorrhea -- which she’d “contracted from a Negro” -- and visited Moscow to learn “unspeakable sexual practices.”)

Kuhn’s proselytizing did not go unnoticed by the Third Reich; he attended the 1936 Olympics as an honored guest and met Adolf Hitler by special invitation.

The Land of the Free™, you see, has a long history of embracing and supporting fascists. This tendency, ever evolving in sophistication, is mocked or ignored at our own peril.

“America’s most powerful radio commentator”
Donald J. Trump is hardly the first wanna-be dick-tator to both use and attack the media as a method of spreading his xenophobic vision. During the Depression, for example, Father Charles Coughlin was preying on the fears of everyday Americans. the Canadian-born Catholic priest rose to prominence as a radio commentator with as many as 40 million listeners on 47 stations.

When Coughlin was asked by a Boston Globe reporter to prove this allegation, the priest belted the journalist in the face.

While his anti-Jewish attacks cost him some of his audience, Coughlin remained popular and undeterred in his rants against the “Christ-killers and Christ-rejecters.” In 1938, he reprinted the notorious anti-Semitic tract “Protocols of the Elders of Zion” in his newspaper, Social Justice.

For his efforts, the Nazi press labeled Coughlin “America’s most powerful radio commentator.”

Trump with Wings?
While Coughlin was creating fertile ground, Charles A. Lindergh, Jr. was bringing fascism to the skies. Still wielding international clout thanks to his Spirit of St. Louis exploits, Lucky Lindy received an invitation to visit Germany in 1936 “in the name of General Goering and the German Air Ministry.”

After touting German air power, the Lone Eagle was feted by Goering and attended the opening ceremonies of the Berlin Olympic Games where he characterized Hitler as “undoubtedly a great man” who’d “done much for the German people” and helped make Germany “the most interesting nation in the world.” On his next excursion to the Fatherland, Lindbergh flew himself and his wife to Munich in 1937 for more aviation-related meetings.

“Lindbergh returned to America to become an outspoken leader of the isolationist ‘America First’ movement, funded with Ford money, that tried to keep the United States out of World War II,” writes historian Kenneth C. Davis. Lindbergh, in one speech, told American Jews to “shut up” and accused the “Jewish-owned press” of pushing the United States into the war.

April 19, 1941: “Public opinion in the USA is beginning to waver. The Isolationists are very active. Colonel Lindbergh is sticking stubbornly and with great courage to his old opinions. A man of honour!”

April 30, 1941: “Lindbergh has written a really spirited letter to Roosevelt. He is the president’s toughest opponent. He asked us not to give him too much prominence, since this could harm him. We have proceeded accordingly.”

June 8, 1941: “These American Jews want war. And when the time comes they will choke on it. Read a brilliant letter from Lindbergh to all Americans. It really tells the Interventionists where to get off. Stylistically magnificent. The man has something.”

After America entered WWII, Lindbergh became a target of derision. Because he had sided with America’s enemies, popular opinion quickly turned against him. The “Lindbergh Beacon” atop a Chicago skyscraper was renamed the “Palmolive Beacon,” and the Colorado Rockies mountain dubbed “Lindbergh Peak” was judiciously re-christened “Lone Eagle Peak.”

However, the damage done to his image was eventually forgiven, thanks to his storied efforts as a pilot in the Pacific war. In the end, Lindbergh’s reputation remained intact.

“Part of the beauty of me is that I'm very rich”
The above quote is Trump, of course, but the predatory pursuit of profit long ago transcended national borders/loyalty. The “very rich” were doing their fascist thing long before The Donald got his first “small loan.”

In the decades before WWII, doing business with Hitler’s Germany or Mussolini’s Italy (or, by proxy, Franco’s Spain) proved no more unsavory to the captains of industry than selling military hardware to Saudi Arabia does today.

“Many leaders of Wall Street and of the U.S. foreign policy establishment had maintained close ties with their German counterparts since the 1920s, some having intermarried or shared investments,” writes investigative reporter Christopher Simpson. “U.S. investment in Germany accelerated rapidly after Hitler came to power.” Such investment increased “by some 48.5 percent between 1929 and 1940.”

Among the U.S. corporations investing in Germany during the 1920s were Ford, General Motors, General Electric, Standard Oil, Texaco, ITT, and IBM -- all of whom were thrilled to see the German labor movement and working-class parties smashed. For many of these companies, operations in Germany continued during the war (sometimes using concentration-camp slave labor) with overt U.S. government support.

“Pilots were given instructions not to hit factories in Germany that were owned by U.S. firms,” writes Michael Parenti. “Thus Cologne was almost leveled by Allied bombing but its Ford plant, providing military equipment for the Nazi army, was untouched; indeed, German civilians began using the plant as an air raid shelter.”

Occupied Wall Street
The support for global fascism also included Sullivan and Cromwell, the most powerful Wall Street law firm of the 1930s. Allen and John Foster Dulles -- the two brothers who guided the firm boycotted their own sister’s 1932 wedding because the groom was Jewish while simultaneously serving as the contacts for I.G. Farben, the company putting the gas in Nazi gas chambers.

During the pre-war period, the elder John Foster led off cables to his German clients with the salutation “Heil Hitler,” and blithely dismissed the Nazi threat in 1935 in a piece he wrote for the Atlantic Monthly. In 1939, he told the Economic Club of New York, “We have to welcome and nurture the desire of the New Germany to find for her energies a new outlet.”

Leonard Mosley, biographer of the Dulles brothers, defends Allen by evoking the all-purpose alibi of anti-communism. The younger Dulles, Mosley claims, “made his loathing of the Nazis plain, years before World War II … (it was) the Russians (who tried) to link his name with bankers who financed Hitler.” However, in 1946, both brothers would play a major role in the founding of the U.S. intelligence community and the subsequent recruiting of Nazi war criminals.

“Import shock troops to help him run for president”
A Third Reich supporter with perhaps the most similarities to Trump was Henry Ford, the autocratic magnate who despised unions, tyrannized workers, and fired any employee caught driving a competitor’s model. Ford, an outspoken anti-Semite, believed that Jews corrupted gentiles with “syphilis, Hollywood, gambling, and jazz.” In 1918, he bought and ran a newspaper, The Dearborn Independent, which became an anti-Jewish forum.

“The New York Times reported in 1922 that there was a widespread rumor circulating in Berlin claiming that Henry Ford was financing Adolf Hitler’s nationalist and anti-Semitic movement in Munich,” write James and Suzanne Pool in their book Who Financed Hitler. “Novelist Upton Sinclair wrote in The Flivver King, a book about Ford, that the Nazis got $40,000 from Ford to reprint anti-Jewish pamphlets in German translations, and that an additional $300,000 was later sent to Hitler through a grandson of the ex-Kaiser who acted as intermediary.”

An appreciative Adolf Hitler kept a large picture of the automobile pioneer besides his desk, explaining: “We look to Heinrich (sic) Ford as the leader of the growing Fascist movement in America.” Hitler hoped to one day “import some shock troops to the United States to help (Ford) run for president.”

On Henry Ford’s 75th birthday in 1938, he was awarded the Grand Cross of the Supreme Order of the German Eagle from the Führer himself. He was the first American (GM’s James Mooney would be second) and only the fourth person in the world to receive the highest decoration that could be given to any non-German citizen. An earlier honoree was none other than kindred spirit, Benito Mussolini… you know, the guy who equated fascism with corporatism.

Trump 2016
I could go on (e.g. U.S. support for Mussolini) but I’m hoping you don’t need further evidence that fascism, xenophobia, and demagoguery are as American as genetically modified apple pie.

What sets Trump apart from his predecessors is that he’s not siding with official enemies. He’s demonizing the already-demonized. He first slandered Mexicans, then Black Lives Matter. When his poll numbers rose, he raised the rhetoric to another level.

Once the United States joined the Good (sic) War, the Nazi supporters discussed here had to become more covert and publicly contrite. The average 1940s American was conditioned to temporarily loathe Germans (and Japanese) thus, you’d win no votes extolling the virtues of Nazism.

Today, however, every time ISIS (or any such group) kills Americans or American allies, Trump’s support grows, with voters saying stuff like: “Even though people don’t want to hear it because a lot of what he says is inflammatory toward certain groups, it is the truth” AND “He’ll keep a sharp eye on those Muslims.”

To anyone consciously and intensely programmed to fear and hate Muslims (and most non-white humans), Trump probably sounds sensible. He’ll stand up to the bogeymen and allow frightened Americans to sleep at night. Decades of relentlessly effective military-industrial propaganda sowed these seeds and now Trump is reaping the low hanging fruit.

"The Secret Behind Donald Trump’s Popularity" by Mickey Z. is licensed under a Creative Commons Attribution-ShareAlike 4.0 International License.
Based on a work at https://worldnewstrust.com/the-secret-behind-donald-trump-s-popularity-mickey-z.