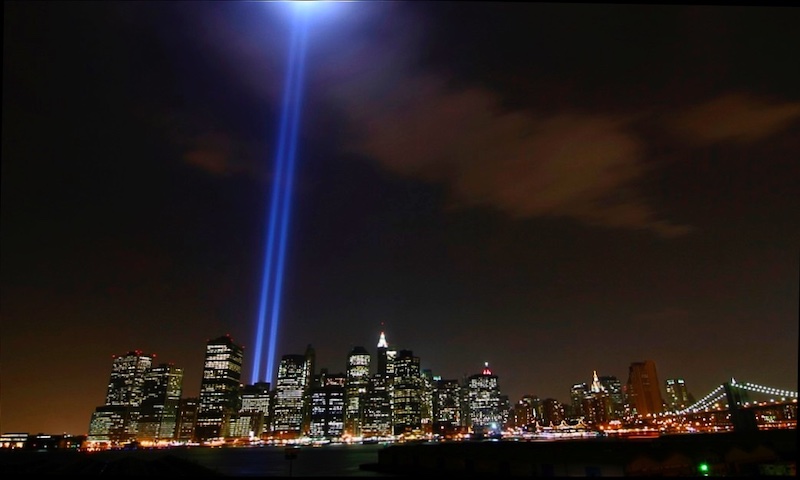 The two blue pillars of light provide a visual reminder of how the Twin Towers, destroyed in the attacks of September 11, 2001, once stood above the city skyline. Photo credit: Associated Press

September 11, 2001. Ani DiFranco called it “A day that America fell to its knees/After strutting around for a century without saying thank you or please.” I’ve spilled gallons of ink writing about 9/11 and countless related issues — often from a geopolitical angle.

This time, I’d like to narrow my focus down to a very personal level by talking about one of the three people I knew who died in the towers that day. 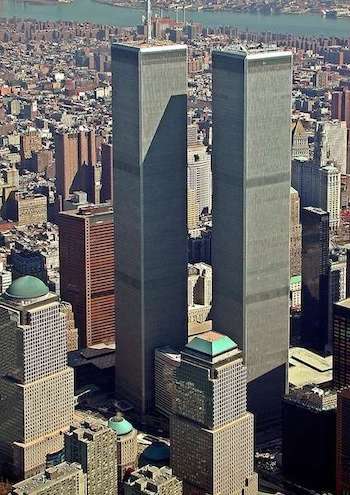 The World Trade Center Twin Towers, New York City. CC BY-SA 3.0Eddie was the oldest son of a woman named Ginger. My Mom and Ginger were friends since they were tots. Ginger got married, moved to New Jersey, and had seven kids. As the years passed, our families socialized less and less, thanks to geography and busy lives, but my Mom and Ginger remained close right up to the end (hold that thought).

I clearly recall the last time we visited Ginger’s family when I was about 13 or 14. After all the usual formalities, my sister went off to hang out with the oldest daughters and their neighborhood friends. I was sort of matched up with Jay, the second oldest son. Jay was a little younger than me but instantly decided to challenge me to a fight. I was riding the swing in his backyard, so I jumped off at my highest peak and landed on him. In a flash, I had him in a headlock — but what I didn’t know was that Big Brother was indeed watching. (It wasn’t until many years later that I’d learn of Eddie's enduring reputation as everyone’s “Big Protector.” )

Eddie was 17 or 18 and he was huge. High school football star huge. He played on both the offensive and defensive lines. As I worked to get Jay to tap out, I suddenly felt two powerful hands grab hold of me. I let go of Jay to defend myself but Eddie lifted me over his head. I didn’t know yet that he was a gentle giant so I had visions of a hospital visit at that point.

After making me promise to not fight with his brother, Eddie casually placed me back down on the grass. I suppose I had won his respect since he invited back to his room (without Jay) to check out his record collection. Being a huge music fan, my eyes hungrily scanned the rows and rows of albums. “Whaddya wanna hear? Eddie asked. I requested the live version of “Inside Looking Out” by Grand Funk Railroad.

“No way,” Eddie whispered. “My Dad would kill me if I played it while he was home. They mention reefer in that song.”

I was long-haired punk who was free to listen to whatever music he chose so Eddie’s admission took me aback. He was practically an adult, had all these albums and a kick-ass stereo, but he wouldn’t dream of breaking a house rule.

Since I never got to know Eddie any further after that afternoon, this episode remained burned in my memory bank without further context. Until September 11, 2001.

Eddie worked for the Port Authority of New York and New Jersey. His office was in the basement of the South Tower of the World Trade Center. He had already lived through the 1993 WTC bombing when he helped a crew of men smash through walls to rescue colleagues. However, Eddie lost five co-workers that day — including a close friend named Monica Smith. She was a 35-year-old secretary who was seven months pregnant and her death impacted Eddie deeply.

Fast forward eight years and the gentle giant was again at his desk when the first plane hit the North Tower. Eddie sprung into action to discover what was going on and then to begin getting people out to safety. Protecting, saving lives.

Here’s how a local New Jersey newspaper described what happened next:

“Around 9:30 a.m. Eddie took a quick second to return a phone call from (his wife) Jane, telling her he was all right, but that he had work to do. ‘I’ll call you later,’ he promised. In a documentary film later produced by French filmmakers Gedeon and Jules Naudet, who had been in New York on Sept. 11 to make a short movie about rookie New York City firefighters, there is a brief glimpse of Eddie, bullhorn in hand, herding lines of office workers out of the burning South Tower. Undoubtedly, he was still there at his post, saving as many lives as he could, perhaps even shielding some of them with his ‘Big Protector’ body when, at 9:59 AM, with a rush and a roar, the 109 stories above him collapsed, pancaking to earth at a rate of one floor per second, settling into a 10-story high inferno of flame and rubble.”

Yes, he once again did the right thing by following house rules. Saving. Lives.

In her eulogy, Eddie’s sister Theresa explained: “He would never have just run out of those towers. We knew that he would have done everything in his power to save lives, even at the risk of his own. That is the kind of man that my big brother was. Eddie would have never been able to live with himself if he had not done what he did.” 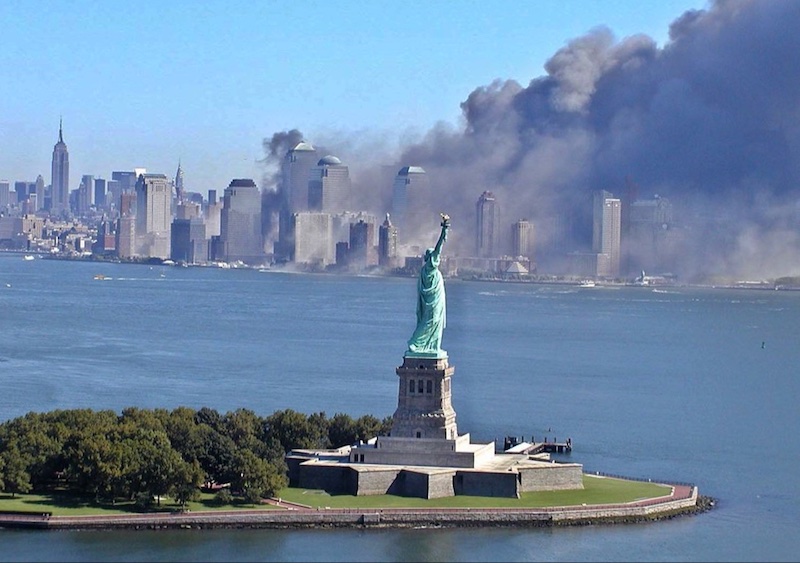 Fast forward again, to January 2008. My beloved mother was in a hospice. My parents were living outside Houston, having followed my sister to Texas. By coincidence, Ginger and her husband had moved to Dallas.

As my mother’s illness progressed, she asked me to manage her email updates. I reconnected with Ginger this way and we developed a sweet, casual rapport. When my Mom was moved to hospice, of course, I let Ginger know she had one last chance to say goodbye.

We were in the hospice, my Mom slipping deeper into palliative sedation when Ginger and her husband arrived. I can close my eyes and still see and hear what happened next. My Mom suddenly came to life and called out in a strong, happy voice: “Oh, Ginger!”

More than six decades of friendship can do that.

We all left the room to give the two women space for a final chat. I don’t know what was said and I don’t need to know. What I do know is that when Ginger emerged, she sought me out. A mother who would mourn her son forever. A son just days away from losing his Mom. The puzzle pieces fit. “Come here,” she said as she pulled me into a long, tear-filled, healing hug.

Today, amidst the turmoil of 2020, 9/11 no longer means fruitless discussions and debates about things like the PATRIOT Act or removing our shoes at the airport. To me, 9/11 is now a time to remember my Mom and Ginger’s last chat. A time to remember Eddie lifting me over his head to protect his little brother and lifting a bullhorn to his lips to save lives inside a hellish inferno. It’s also a time to appreciate all the unsung heroes out there right now who do “everything in their power” to help and protect.

Endnote: After 9/11, Ginger’s family started a non-profit called “With Eddie's Help” that continues to raise money for efforts like providing college scholarships to students from Eddie’s high school.