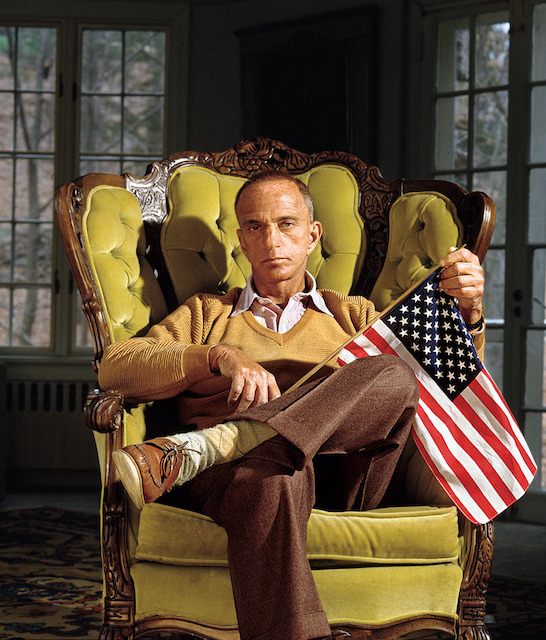 Roy Cohn in 1986, a few months before he died. Photograph by Mary Ellen Mark

The New York Establishment will ignore unscrupulous acts to serve its interests -- just look how it treated Roy Cohn, onetime lawyer to the president.

April 9, 2018 (NYMag.com) -- Amid the aftershocks of Donald Trump’s firing of James Comey last May, I went to see Angels in America at the same theater in London, the National, where I’d first seen it as a New York Times drama critic some 25 years earlier. The play didn’t transport me quite as far from the lamentable present as I’d hoped. The new production, now on Broadway, doesn’t radically depart in tone or quality (high) from the first. But the play’s center of gravity had shifted. While Tony Kushner’s epic had been seared into my memory by the frail figure of Prior Walter, a young gay man fighting AIDS with almost the entire world aligned against him, this time it was Roy Cohn who dominated: a closeted, homophobic, middle-aged gay man also battling AIDS but who, unlike the fictional Prior, was a real-life Über-villain of America’s 20th century. “The polestar of human evil,” as one character describes him. “The worst human being who ever lived … the most evil, twisted, vicious bastard ever to snort coke at Studio 54.”

What has changed is not Angels but America. Even if you hadn’t known that Cohn had been Trump’s mentor and hadn’t read the election-year journalistic retrospectives on their toxic common tactics (counterpunch viciously, deny everything, stiff your creditors, manipulate the tabloids), you’d see and hear the current president in Cohn’s ruthless bullying and profane braggadocio. That isn’t because Nathan Lane, a Cohn for the ages, is doing a Trump impersonation. The uncanny overlap between these two figures is all there in the writing. “Was it legal? Fuck legal,” Cohn rants at one point, about having privately lobbied the judge Irving Kaufman to send Ethel Rosenberg to the electric chair. “Am I a nice man? Fuck nice. They say terrible things about me in the Nation. Fuck the Nation. You want to be Nice, or you want to be Effective?” It turns out that in his rendering of Cohn a quarter-century ago, Kushner had identified an enduring strain of political evil that is as malignant in its way as the AIDS virus, just as dangerous to the nation, and just as difficult to eradicate.

Cohn, after all, was supposed to have been washed up in 1954, after he and his superior in witch-hunting, Joe McCarthy, imploded in the televised Army-McCarthy hearings. McCarthy drank himself to death, and Cohn fled Washington a pariah, his brief career in government service in ruins. Yet as Kushner accurately picks up the story three decades later, Cohn had reinvented himself as a power broker after returning to his hometown of New York, and he would remain so right up until disbarment and AIDS finally leveled him in 1986. How could that be? Sure, the right-wing resurgence of the 1980s gave him a late-in-life boost. Cohn’s juice with Ronnie and Nancy, as Kushner dramatizes, gained him access to the experimental medication AZT denied most everyone else. (He may have been the only AIDS patient the Reagan White House lifted a finger to help.) But the question of how Cohn both survived and flourished as a Manhattan eminence in the quarter-century between McCarthy and Reagan is beyond the play’s already-considerable scope.

It’s an ellipsis that gnawed at me because the same question applies to Trump. Cohn thrived throughout a New York second act rife with indictments and scandals that included accusations of multiple bank- and securities-law violations, perennial tax evasion, bribery, extortion, theft, and even precipitating the death of a young man in a suspicious fire. Trump may never have been suspected of manslaughter, but he also flourished for decades despite being a shameless lawbreaker, tax evader, liar, racist, bankruptcy aficionado, and hypocrite notorious for his mob connections, transactional sexual promiscuity, and utter disregard for rules, scruples, and morals. Indeed, Trump triumphed despite having all of Cohn’s debits, wartime draft dodging included, but none of his assets -- legal cunning, erudition, a sense of humor, brainpower, and loyalty. (The putz-cum-fixer Michael Cohen, who is to Cohn what Dan Quayle was to Jack Kennedy, boasts none of these attributes either.) And Trump, like Cohn, got away with it all under the ostensibly pitiless magnifying glass of New York. Much as one hates to concede it, it’s no small achievement that he succeeded where so many of his betters failed in becoming the first New Yorker to catapult himself to the White House since Franklin D. Roosevelt.