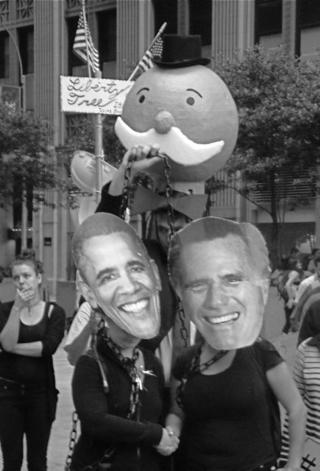 Mr. G.B. Shaw sez: “I often quote myself; it adds spice to my conversation.”

With that concept in mind, I’ll remind you that in 2008, I called St. Barack’s ascendancy to the throne, “an excellent illustration of how the system handles dissent. A black face, a soothing voice and a vague message of change -- all designed to keep the rabble pacified without changing anything at all.”

This paradigm also keeps us distracted; it keeps us chasing our collective tail in the desperate belief that seemingly random events might be intricately linked into massive schemes with tentacles reaching across the globe and maybe even into outer space.

“The seeming paranoia of conspiracy theorists is not necessarily the result of some underlying mental dysfunction or of stupidity,” says author Jonathan Vankin. “The dysfunction is with American society, maybe even civilization as a whole. The structure of civilization itself requires mass adherence to faith in the institutions that built civilization and make it run. Conspiracies theorists question those authorities and, because they do, they skirt the fringes of society.”

And they’ll remain on the “fringes of society” until they embrace and expose the true essence of this toxic global culture.

As novelist and essayist Gore Vidal once explained: “In the 18th century, opinion was dispensed from the pulpit and schoolroom. Now, the media are in place to give us opinion that has been manufactured in the boardrooms of those corporations -- once national, now international -- that control our lives.”

This, dear comrades, could be deemed the ultimate conspiracy theory.

Grand Unifying Theory
Corporate America is concerned solely with profits... period. Therefore, America’s foreign and domestic policy is quite logically geared towards that financial end -- without any accountability.

The no-accountability part is made possible by the “other wing” of the power elite -- the corporate media. Through incredibly effective thought control, the press can “manufacture consent” for the policies of the CEOs and the ruling class.

Whether this is done through scare tactics or lies of omission, the public can be made to accept and adopt the needs of the rich as their own. The media turns the opinions that have been created in corporate boardrooms and Pentagon meetings into vital “national interests” that you and I must protect with our very lives -- and, sadly, protect we do.

Bearing this monolithic system in mind, it’s easy to see how some, well, unusual theories can be provoked in the name of explaining why things aren’t as promised in the land of opportunity. However, such theories are highly unnecessary once your eyes are wide open because, by then, reality is not that difficult to discern.

Please allow me to introduce an illuminating example...

The United States recruited Nazi war criminals to help form the Central Intelligence Agency (CIA) after World War II. To those who perpetrated this atrocity, it wasn’t an issue of hypocritically “hiring the enemy.” Rather, the ruling class -- rich men like the Dulles brothers -- saw Soviet communism as the clear and present threat to their indoctrination and thus acted accordingly. Using genocidal criminals towards that end could be rationalized in their warped minds and thereby explains their sheer incomprehension when the Nazi-CIA connection is even mentioned.

Mic Check: Those in control simply do not have another point of view on the subject.

Among the power elite -- the top 1% that truly sets policy in the United States -- there is one universal conspiracy theory: they all think alike.

...and that includes both Obama and Romney.

On that note, I’ll give Lucy Parsons the last word: "Never be deceived that the rich will permit you to vote away their wealth."