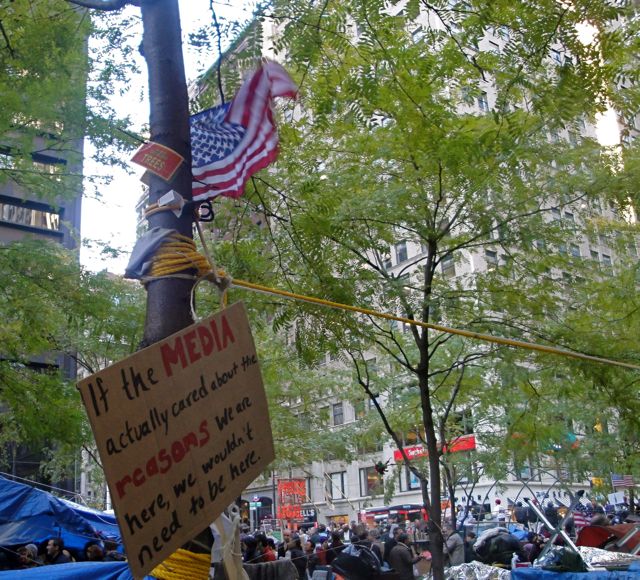 (Lesson: Don’t get used to the media love)

"The revolution will not be objectively reported."

- Richie Alexandro, "Meet Me at Zuccotti"

While the post-hurricane environment throughout the N.Y./N.J. area once again debunked the myth of “disaster = chaos,” it also created a window of opportunity for the 99% to re-imagine some aspects of modern human culture. Such solidarity, of course, is threatening to the 1% and has led them to do some imagining of their own. Below is one example of how corporate propaganda helps shape the cultural conversation.

In a Nov. 9, 2012 article, New York Times reporter Michael Wilson informed us that in post-Sandy NYC, the “hunt” was on for “that most deeply despised boogeyman,” the one “who creeps in behind catastrophes” to prey on the “helpless huddled in the dark.”

Was he speaking of the pandering politicians who exploit misery to create photo ops and spout more empty promises?

Or perhaps it was those captains of industry ready to cash in on the looming gentrification they’d help create in the rebuilding (sic) process?

If not, surely Wilson meant the inept drones that staff agencies and institutions like FEMA, NYPD, and the Red Cross, right?

A. None of the above

What the newspaper of record was warning us all to fear is (wait for it) looters -- and not just your garden variety looters. Nope, the Times wants us to remain ever-vigilant on the lookout for imaginary looters.

This spooky tale begins with the notorious Blue Bloc -- Mayor Bloomberg’s private army -- fanning out across neighborhoods impacted by power outages. After collecting the “names and addresses of 40 convicted felons who were on parole,” they paid such folks a visit.

Why? “To remind them we’re looking at them,” said NYPD spokesman, Paul J. Browne, the chief police spokesman, before adding: “We think some might be responsible for burglaries, and we want to make sure the other ones know we’re out there and looking to suppress any burglaries that are ongoing.”

Despite all this clairvoyant criminology work and mysterious media warnings, Browne admitted: “In terms of wholesale looting, we didn’t see it.”

Here’s a “typical case” of what they did see, something the Times deemed fit to print:

A police officer saw a young man break into a dark convenience store the morning after the storm, wearing “a hooded sweatshirt fitted closely to defendant’s body with nothing bulging or protruding,” according to a criminal complaint. The man emerged from the store with “pockets bulging and overflowing with various items.” Among them: Kit-Kat bars, Twix bars, Snickers bars, a Sterno candle and $10.57 in loose change, according to the complaint.

This particular “deeply despised boogeyman” who creeped in “behind a catastrophe” was a hungry and cold 17-year-old -- the Times gave his name but I’d rather not -- whose defense lawyer later posed: “A guy named Dostoyevsky wrote a pretty good story about that, didn’t he?”

As Wilson clarifies: “So how many looters were there? The short answer seems to be not many.”

In today’s text/tweet fog, very few readers are gonna make it to the end of Wilson’s article but it’s there that he fully exposes his utter lack of journalistic credibility. After claiming two managers at a Rent-A-Center in Coney Island told him about burglars coming “through the store’s broken windows” and making off “with televisions, laptops and video games,” Wilson adds: “But the police said no such crime had been reported as of Friday.”

Thanks to the corporate media and some imaginary looters, much of the 99% will remain more suspicious of their neighbors than of the global criminals that helped create the impact and aftermath of Sandy.

#Occupy Media Reality
Corporate media outlets like the New York Times have a vested interest in shattering the links cultivated by solidarity and mutual aid. The 1% maintains power by using its propaganda wing to sow fear, distrust, and paranoia amongst the huddled masses.

Sure, some of you might be thinking: It used to be like this, Mickey Z., but it’s all changed. Thanks to Occupy Sandy, the media loves OWS now. We’re heroes.

Reality: Whether you label them liberal or conservative, most major media outlets are large corporations owned by or aligned with even larger corporations, and they share a common strategy: selling a product (an affluent audience) to a given market (advertisers).

Therefore, we shouldn’t find it too shocking that the image of the world being presented by a corporate-owned press always reflects the biased interests of the elite players involved in this sordid little love triangle.

Mic Check: A few media outlets may be praising OWS now but let’s not get high on our own supply.

As long as OWS is busy outshining a government agency with a notoriously bad public image (e.g. FEMA), we’ll get plenty of media love.

In fact, we may even be exploited to help Corporate America suggest that disaster relief be privatized. The media will just eat this one up: If a bunch of unwashed hippies could outperform FEMA, it’s clearly time to give the job (read: funnel tax money) to pros like Academi (the mercenaries formerly known as Blackwater).

Once we get back to economic-based actions like instituting a debt jubilee and boycotting Black Friday, the mainstream media will get back to distorting and/or ignoring OWS.

This is the media’s function and it'd be a waste of time and energy for us to expect otherwise. They've been given the keys to the public (sic) airwaves and we don't yet have the means to change that.

We do, however, have the means to circumvent this model.

We can't yell louder than the professional propagandists of the corporate media but we damn sure can whisper more effectively -- and that is what’s happening in stricken communities all across the tri-state area.

It will require both outrage and outreach for us to outlive the corporate “boogeymen” that are “looting” our future.

But, as the events of the past few weeks demonstrate: If we build it, they will Occupy…