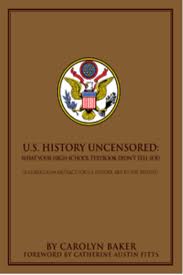 The book's introduction informs the reader that it is not a textbook, but rather a supplement written to expand and illumine material included in institutionally approved college history textbooks. I was motivated to offer the supplement because as a professor of history, I was appalled at the amount of history omitted in mainstream U.S. history college textbooks, not only due to the desire of publishers to produce less costly books, but as a result of a massive dumbing down of American culture in recent years.

Or as one former history student of mine put it: "I used to be bored when I would watch the news with my dad because it was actually news, but today when I watch the news, it's fun because it's about things that really interest me like celebrity gossip, hip hop music, and funny commercials."

U.S. History Uncensored provides well-documented resources beyond traditional textbook material to which the reader can refer to glean additional information about historical events and read for him/herself the primary and secondary sources that are so frequently ignored in college history textbooks.

I'm not Howard Zinn, even though my book has sometimes been referred to as "Zinn on steroids." Dear Howard left us just before the Texas history textbook controversy erupted, and I have no doubt that he's spinning in his grave in response to it.

So is this article a commercial for my book? In a sense yes, but more importantly, it is an urgent appeal to the reader to connect the dots of the rabid agenda perpetuated those who are currently obsessed with revising U.S. history. Why does this matter? Because if you want to conquer a people -- any people -- one of the first strategies for doing so is to eliminate or distort their history. While the neo-fascist revisionist "historians" would disagree, the fact is that 19th-century public education in the United States devised a specific agenda for removing Native American culture from Native children in this country who were forced (often kidnapped and then forced) to attend non-Native schools. Likewise, it was not until the 1960s that African American culture was taught in white schools in America because from the white perspective, the only history worth knowing was white history.

Excise a human being's culture and history from him/her, and you have a human being which you can fashion in any manner you desire.

The revision of U.S. history by the rabid, neo-fascist right in a tragically dumbed-down culture signals the conquest of young minds in service of a particular social and political perspective that indoctrinates them in geopolitical exceptionalism and expansionism, white supremacy, corporate capitalism, and a virulent religionist ideology. In fact all of these are characteristics of political fascism and a society immersed in its principles.

The revision of history did not begin with Nazi Germany, but the Third Reich's success in manipulating German history is a stellar example of revisionist history in the modern world. Later, in the Soviet Union under Stalin, that nation's history was similarly revised. Overall, historical revision emerges from attempts by political minorities to advance their political position or ideology.

Legitimate revision of historical interpretation evolves in many cases because new historical facts have arisen which compel historians to adopt a new perspective. It should be noted, however, that revision is not the same as denial. For example, this past week, Mississippi Governor, Haley Barbourasserted that when he was attending high school in Mississippi in the mid-1960s and when attending the University of Mississippi during the same era, race relations were "no big deal." This statement is not an example of revisionist history, but blatant denial of the historical fact of white hot racial tension in the American South during the 1950s and ‘60s. And in the worst case scenario, people sometimes blatantly lie about history which is beyond either revision or denial. For example Glenn Beck reluctantly admitted that he lied when in his infamous August 28 "Restoring Honor" rally in front of the Lincoln Memorial he stated that he had visited the National Archives and "held in his hand," the original draft of George Washington's Inaugural Address. Turns out that someone showed it to him, but he was never allowed to touch it. Another example of high patriotic and exceedingly manipulative drama.

But are the promotion of ideology or the drive toward political power the only motivations for revising, denying, or lying about history? Absolutely not. In my opinion, a huge motivator is the desire to purge history of illuminating one's own shadowy past. Let's face it, coming to terms with the facts of white European genocide of the Native population on this continent, the trans-Atlantic slave trade, the eclipsing of the U.S. Constitution by corporate capitalism and imperialist expansionism -- barbaric and shameful realities in our nation's history -- is challenging for any American citizen. Conveniently, these are denied, distorted, or completely eliminated in the new fascist history brought to us by largely fundamentalist Christian conservatives.

Moreover, this ideological mangling of U.S. history not only omits the odious aspects of our past but serves to justify them since ideologically speaking, racism, imperialism, sexism, and corporatism have been overwhelmingly embraced by conservative Christianity for the past two millennia. Thus any hint of social justice, a la Liberation Theology is viciously denounced as "un-American" and "socialistic."

A literate and well-informed citizenry would not tolerate the ignorant fabrications and outright lies of conservative Christianity with regard to this nation's history. Had a commitment to scholarship taken precedence over consumerism in our panoply of cultural values in the past century, the new-old fascist history would have been recognized for what it is and would have been resoundingly rejected. In fact, it could be argued that conservative Christianity can only implant itself in the soil of corporate capitalist values, thereby spawning monstrous perceptions of a society's past, present, and future with implacable determination to perpetuate its earth-hating, soul-murdering agenda throughout the farthest reaches of the planet.

As the collapse of public education in the United States exacerbates, parents and educators who are awake and who may well end up with no options for educating children beyond home schooling must educate themselves in American history. They must investigate history beyond what is taught in traditional textbooks, and certainly beyond the ideological mutilation of history by those who seek to proselytize and politicize using a new-old fascist agenda. Otherwise, citizens young and old-of all ethnicities and genders can be manipulated in any direction that serves the whims of religious zealots and political opportunists.

U.S. History Uncensored: What Your High School Textbook Didn't Tell You may be purchased at the Speaking Truth to Power website or at Amazon, Barnes & Noble, or IUniverse Publishing online.