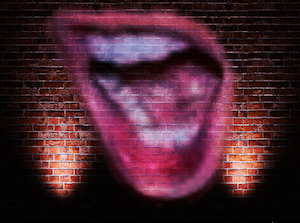 "Trump." By IoSonoUnaFotoCamera. Flickr (CC BY-SA 2.0)May 18, 2018 (The Week) -- Another week in the Donald Trump presidency, another handful of days so stuffed full of sordid and highly complicated stories that even journalists have trouble keeping track of what's going on.

But the thread tying all the latest news together -- from Trump lawyer Michael Cohen's sundry exploits, to Trump's ongoing presidential profiteering, to the Russia investigation -- is corruption. The Trump administration will surely go down as one of the most -- if not the most -- rotten in American history.

Let's roll this most recent bit of tape. Ronan Farrow, who has become one of the signature investigative reporters of the Trump presidency, revealed at The New Yorker why somebody leaked the notorious financial reports of Michael Cohen showing that he had been given fantastically large sums of money from AT&T, Novartis, and a Russian oligarch-connected LLC. This information came from a "suspicious activity report" (SAR), which is something a bank files with the Treasury Department when they suspect something fishy is going on with a customer.

It turns out the source is a law enforcement official, and he released the SAR after he discovered that two more SARs detailing $3 million of additional similar transactions had somehow vanished from the Treasury Department's database. The source told Farrow that he feared that someone within Treasury was withholding the documents for political reasons, and thus released the one he had.