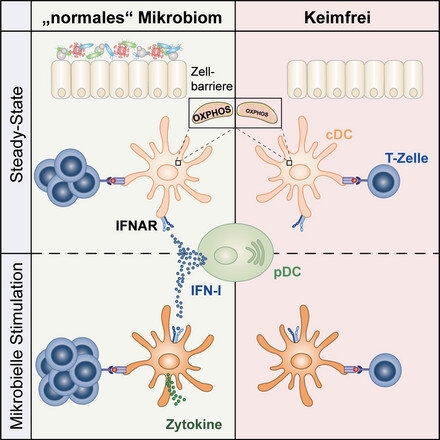 May 12, 2020 (MedicalXpress) -- Working alongside colleagues in Mainz, Bern, Hannover and Bonn, researchers from Charité - Universitätsmedizin Berlin, the Berlin Institute of Health (BIH) and the German Rheumatism Research Center Berlin (DRFZ) were able to show how the microbiome helps to render the immune system capable of responding to pathogens.

If microbiome-derived signals are absent, relevant mediators are not released, resulting in a failure to activate metabolic processes in certain immune cells. According to the researchers' report, which has been published in Cell, this leaves the relevant cells without the necessary fuel to mount an immune response.

Residing in environmental interfaces, the body's epithelial tissues represent potential gateways for pathogens. These tissues are also naturally colonized by a complex community of bacteria, viruses, fungi and parasites known as the microbiome.

It is likely that, during the course of evolution, permanent interactions with these microorganisms resulted in the development of robust signaling pathways that protect the body.

A team of researchers led by Prof. Dr. Andreas Diefenbach, Director of Charité's Institute of Microbiology, Infectious Diseases and Immunology, have been studying the microbiome's role in the body's immune response against harmful pathogens and the resulting effects on signaling pathways.