The Infinite Suburb Is an Academic Joke | James Howard Kunstler 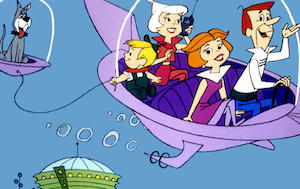 Oct. 27, 2017 (The American Conservative) -- The elite graduate schools of urban planning have yet another new vision of the future.

Lately, they see a new-and-improved suburbia -- based on self-driving electric cars, “drone deliveries at your doorstep,” and “teardrop-shaped one-way roads” (otherwise known as cul-de-sacs) -- as the coming sure thing. It sounds suspiciously like yesterday’s tomorrow, the George Jetson utopia that has been the stock-in-trade of half-baked futurism for decades. It may be obvious that for some time now we have lived in a reality-optional culture, and it’s vividly on display in the cavalcade of techno-narcissism that passes for thinking these days in academia.

Exhibit A is an essay that appeared last month in The New York Times Magazine titled “The Suburb of the Future is Almost Here,” by Alan M. Berger of the MIT urban design faculty and author of the book Infinite Suburbia -- on the face of it a perfectly inane notion. The subtitle of his Times Magazine piece argued that “Millennials want a different kind of suburban development that is smart, efficient, and sustainable.”

Note the trio of clichés at the end, borrowed from the lexicon of the advertising industry. “Smart” is a meaningless anodyne that replaces the worn out tropes “deluxe,” “super,” “limited edition,” and so on. It’s simply meant to tweak the reader’s status consciousness. Who wants to be dumb?

“Efficient” and “sustainable” are actually at odds. The combo ought to ring an alarm bell for anyone tasked with designing human habitats. Do you know what “efficient” gets you in terms of ecology? Monocultures, such as GMO corn grown on sterile soil mediums jacked with petroleum-based fertilizers, herbicides, and fast-depleting fossil aquifer water. It’s a method that is very efficient for producing corn flakes and Cheez Doodles, but has poor prospects for continuing further into this century -- as does conventional suburban sprawl, as we’ve known it. Efficiency in ecological terms beats a path straight to entropy and death.