The Gift of the Snow Day | Deborah Goodwin

March 19, 2013 (Shapeshiftas.com) -- We heard starting about Saturday that maybe we were in for some snow.

It seemed late. The sap was already running, we were in mud boots, and the car was caked in the stuff. Mostly the snow was gone, certainly along the roadsides the leftover plowed piles were looking dirty and sparse. I was sure that I had flicked work for the last time to go skiing on a weekday. It was time to buck up, do the taxes and the spring cleaning.

Then came the gift from above! SNOW DAY!!!!! 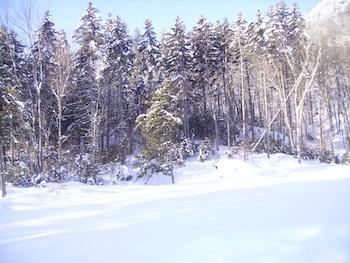 The back yard, the day after.

Now, weather is very important here in Vermont. You have to be prepared for storms -- no sh** -- you can get stranded, snowed in, for a day or two at least. Back in the day, you would be stuck up here after the first big snow for the whole season. You wouldn't go anywhere really for the whole winter, certainly not up to Killington for a few runs. (It's so very hard to imagine what they did with themselves, all winter long, besides chopping more wood.)

Anyway, we were following our favorite WeatherApps™ and checking the school-closing sites every hour, so we knew it was looking good. (of course OUR school was the very last to announce, by robo-calling at 5:00 AM just when I was finally dropping off to sleep.) I have to admit, we all were hoping and planning for a very needed Snow Day. 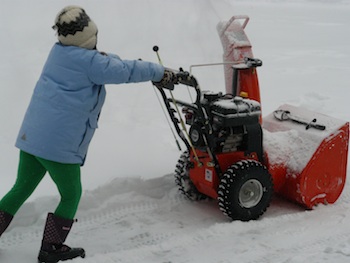 Unfortunately, you have to clean up the next day, although snowblowing is kinda fun.

The first winter we were here, we had a big snow on Christmas Eve Eve. I tried to get out and pick up the roast and the last-minute stuff for Christmas dinner, and got stuck just part-way down the driveway. Yes, I cried. I had ordered that roast a month ago, after researching the best butchers around, and had already made the Yorkshire Pudding batter. Instead, we ate Chicken Satay and shrimp cocktail from the freezer, built a few fires, and never took our PJs off all day. My husband managed to convince me it was romantic, and it was. Welcome to Vermont. 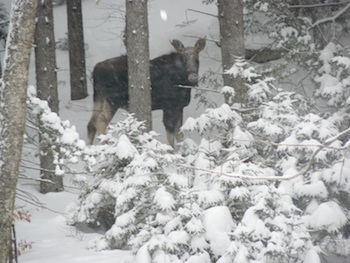 We had a visitor one Snow Day.

In New York I remember a few snow days, one in particular in early April, where I witnessed people skiing down Second Avenue and sledding down Murray Hill. There were no buses and only a few cabs, truly a remarkable sight. Where I grew up, in Ohio, we would get a snow day or two every year, because of the dreaded Lake Effect that dumped all the Canadian snow on the Northeast Coast of Lake Erie. Here in Vermont, the schools plan  on three snow days per year and usually have to take one or two more, (thus resulting in staying in school longer come June.)

A Snow Day is one of the best things ever. You get to stop whatever you are doing, quit your planning and scheduling and running around, and just have a quiet, peaceful day with NO EXPECTATIONS. If you do have to get to work, you go in late, and bond with your colleagues over the ordeal that getting to work was. Nothing else really gets done, because only half the people made it in.

If you get to stay home, you sleep late, make a fire, drink tea and read a novel. (I also made pizza dough and took a long bath.) There's something about a Snow Day that is sort of like going to Meeting -- you have to stop, slow down, listen to the snow falling (the sound of silence), and breathe. You can't do any of the things you have to do or are supposed to do. Technology may or may not be working. You can't go anywhere until the road gets plowed. You get to just sit, and be. What a gift!