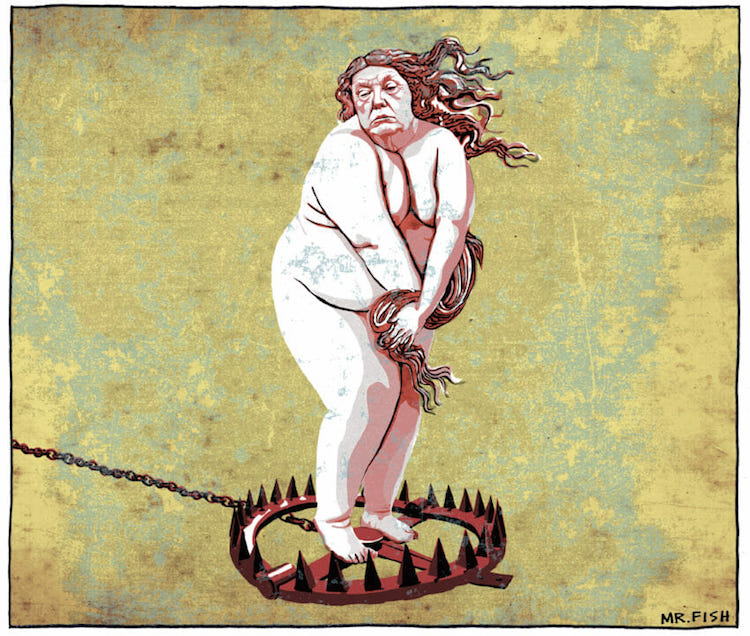 May 20, 2018 (Truthdig) -- The Trump administration did not rise, prima facie, like Venus on a half shell from the sea.

Donald Trump is the result of a long process of political, cultural and social decay. He is a product of our failed democracy. The longer we perpetuate the fiction that we live in a functioning democracy, that Trump and the political mutations around him are somehow an aberrant deviation that can be vanquished in the next election, the more we will hurtle toward tyranny.

The problem is not Trump. It is a political system, dominated by corporate power and the mandarins of the two major political parties, in which we don’t count. We will wrest back political control by dismantling the corporate state, and this means massive and sustained civil disobedience, like that demonstrated by teachers around the country this year. If we do not stand up we will enter a new dark age.

The Democratic Party, which helped build our system of inverted totalitarianism, is once again held up by many on the left as the savior. Yet the party steadfastly refuses to address the social inequality that led to the election of Trump and the insurgency by Bernie Sanders. It is deaf, dumb and blind to the very real economic suffering that plagues over half the country.

It will not fight to pay workers a living wage.

It will not defy the pharmaceutical and insurance industries to provide Medicare for all.

It will not curb the voracious appetite of the military that is disemboweling the country and promoting the prosecution of futile and costly foreign wars.

It will not restore our lost civil liberties, including the right to privacy, freedom from government surveillance, and due process.

It will not get corporate and dark money out of politics.

It plays to the margins, especially in election seasons, refusing to address substantive political and social problems and instead focusing on narrow cultural issues like gay rights, abortion and gun control in our peculiar species of anti-politics.

This is a doomed tactic, but one that is understandable. The leadership of the party, the Clintons, Nancy Pelosi, Chuck Schumer, Tom Perez, are creations of corporate America. In an open and democratic political process, one not dominated by party elites and corporate money, these people would not hold political power. They know this. They would rather implode the entire system than give up their positions of privilege.

And that, I fear, is what will happen. The idea that the Democratic Party is in any way a bulwark against despotism defies the last three decades of its political activity. It is the guarantor of despotism.

Trump has tapped into the hatred that huge segments of the American public have for a political and economic system that has betrayed them. He may be inept, degenerate, dishonest and a narcissist, but he adeptly ridicules the system they despise. His cruel and demeaning taunts directed at government agencies, laws and the established elites resonate with people for whom these agencies, laws and elites have become hostile forces. And for many who see no shift in the political landscape to alleviate their suffering, Trump’s cruelty and invective are at least cathartic.