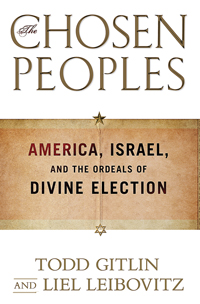 Oct. 26, 2010 (Palestine Chronicle) -- A work on studying chosen peoples needs to be approached with some kind of trepidation when one knows that they themselves are not chosen. If for nothing else, it is impossible to rationally argue against faith in biblical "chosenness." However, if one accepts the underlying premise that other people believe in their being chosen then the idea of chosenness can be worked with. This appears to be what the authors of this new book “The Chosen Peoples” attempt to examine.

In an historical sense, looking at the way the idea of being chosen affected the decisions and events around the people claiming to be chosen, the authors did a reasonable job. It is much more of an historical overview than a psychological examination of the ramifications that assuming and advocating “divine election” would create. The material covered does provide a slim overview of historical events.

In the Jewish case the mythological biblical events concern the original "nation" of Israel --nation being a term that has several meanings according to its context -- and how it develops through the diaspora and on into Zionism and the current problems of Israel/Palestine. In the case of the United States, the historical review starts with the first colonial settlers and their attitudes and actions in relation with the indigenous populations, and then carries forward through several presidencies to the current support of the state of Israel by the U.S. government.

Within these presentation the obvious questions should rise, that “If you are the chosen people, are you acting in a manner in which that divine election was intended? And if not, is there the possibility that the election could be nullified?” The authors put it this way, sort of a half question, “that its [Israel’s] values rested on the people’s commitment to God’s commandments, that the land was theirs only so they might strive to become just?” This is followed by another half question reminding the readers that “Israel’s first two historical sojourns in Zionism ended in exile, with the Lord displeased with His people’s transgressions, their greed and idolatry?”

Following more discussion of Zionist philosophy, the authors conclude that both “religious and secular Zionists adhere to a narrow, materialistic interpretation of chosenness.” The result is that “They reject the ordeal of working toward a more just society in favor of facile striving for territory.” They are bereft of a different understanding of chosenness, “as a burden ... a divine commandment to build a society that treats its sons, daughters, neighbors, and strangers with compassion and grace and at the same time renounces any claim of superiority.” Further, expressed in messianic terms, “once the idea of the Promised Land is severed from the messianic desire to the reward with just deeds, the Jewish people, secular and religious alike, are left with the forceful pursuit of territory.”

Turning next to the United States, the authors highlight the idea of the claims about a “new Jerusalem,” of being a “beacon ... a light shining unto others,” the essential idea being that the state would serve as an example and draw others who want to also exemplify those standards towards it. The brief history given shows how this idealism was often, and is especially under the ongoing consequences of Bush’s actions and personal messianic beliefs, turned into an arrogant, conceited, and racist views of the peoples of the world who did not agree with U.S. foreign policy. The other became “evil,” the United States is good, and there is little in between. Except that examining the actions of the United States in comparison with what it says it wants serves only to dismiss the words as plain contradictory rhetoric.

While the book itself is reasonable, it has a poorly argued section, almost apologetic but not quite getting there, which essentially asks “Why pick on Israel and their treatment of the Palestinians and Arabs when there are so many other bad things going on around the world that do not get mentioned?” A second similar question is made for the United States, “Why are they blamed for all the bad things going on in the world? The answers should be obvious to the authors, but they choose not to see it. The authors end their argument with the question, “in a world of dispossession and monstrous injustice, why the rancor and disproportion.” Their counter examples include slavery and slaughter in Sudan and women’s right throughout the Arab world, good solid bread and butter issues to fall back on when one’s overall strategic plans and goals come under detailed examination.

The answers are inter-twined for both questions, as the United States is the main financer of the Israeli military, supports its actions in the Middle East, and is using/being used by Israel for respective foreign policy goals. The main response is, that yes, there are many other atrocities around the world, many other areas that could be examined, but in consideration of the wealth and power of the U.S. and Israel, their very central role in world events, in all Middle East events, makes them subject to the brunt of critical foreign policy analysis and humane international criticism around the world.

The Sudan and Arab women’s rights, the depredations of the Khmer Rouge (really, also initially aided by the U.S. involvement in Vietnam just as their involvement in Afghanistan against the Soviets aided the rise of Islamic fundamentalism) and a host of other ills in the world are very real, but remain peripheral to -- though part of -- the fundamental U.S./Israeli imperial designs for the world. Are they being singled out? Yes, and for cause.

Perhaps that chosenness has something to do with it as well. Both Israel and the United States claim to be chosen by God in some manner. But what kind of God is it that allows for the greed and arrogance of occupying a land and dispossessing and killing its indigenous populations, of placing them in cantonments/reservations and denying them all the opportunities that the supposed democratic and free societies they claim to be are able to provide?

What kind of God is it whose chosen ones torture, incarcerate, starve, invade, and destroy civilian infrastructures in other territories, who rob their resources (oil, water), and carry the strongest and most deadliest of the weapons of mass destruction while trying to argue that others should not have them?

The hypocrisy, greed, arrogance, and double-standards that accompany the words and actions of the United States and Israel raises probably two final theological questions: Will God remove them from his graces, deliver them some humility, so that they may again at some future time serve as beacons and examples of Gods divine graces? Or are they even truly God’s chosen people, and are acting on an anthropomorphized divinity by which they get to claim their own fundamentals, however contrary to either humane or divine love and compassion they may be?

This is not a great book, nor in the one section even a reasonable book. It does however raise some interesting ideas on what effect the belief in being chosen can create within the world of the here and now. It can serve as a starter for a discussion on chosenness, but the history of the idea needs to be combined with a much stronger basis of understanding the current foreign policies of both countries to have a true comprehension of the effects that the idea of divine election has had and will continue to have on real world events.