The Case against Pakistani Normalization with Israel | Ramzy Baroud 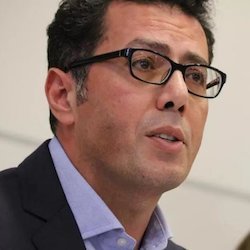 The Pakistani government should never, under any circumstances and no matter the pressure, normalize with Israel.

Doing so is not only dangerous -- as it will embolden an already vile, racist, violent apartheid Israel -- but it would also be considered a betrayal of a historic legacy of mutual solidarity, collective affinity and brotherhood that have bonded Palestinians and Pakistanis for many generations.

The bond between Palestine and Pakistan is not one that is based on rhetoric. Rather, it is cemented through blood and sacrifice, as Pakistani fighters have taken part in the desperate Palestinian-Arab attempt at pushing back Zionist colonization of the Palestinian homeland in 1948. Whenever Palestinians think back of those who stood by their side during their times of hardship and collective pain, Pakistan always features prominently on the list.

But it is not just this. The Pakistani Air Force also took part in the war of 1967 when Israel occupied the rest of historic Palestine and, more importantly, in the pivotal war of 1973, when Arabs and Muslims fought back. It was no surprise to learn that the Pakistani government recognized the Palestine Liberation Organization (PLO) as the "sole and legitimate representative of the Palestinian people" before the Arab League had done so at the Rabat Conference in Morocco in 1974.

It is terribly sad to see that Morocco, despite the collective love shared between the Moroccan and the Palestinian people, has succumbed to Jared Kushner’s political designs to normalize with Israel. Trump’s son-in-law had launched a decided campaign to normalize Israel in the eyes of Arabs and Muslims, without forcing Tel Aviv to make a single political concession to the occupied and oppressed Palestinians. Countries like Morocco, Bahrain, the United Arab Emirates and Sudan sold Palestine so cheaply, in exchange for limited, selfish and, worse, unguaranteed gains.

Pakistan cannot join this misled club. A country of Pakistan’s size, of its large and vibrant population and of the kind of moral authority it possesses is not meant to be an American lackey, dancing to the drumbeats of the U.S. administration, of Kushner-like politicians, who are unable to decipher the long-term consequences of their actions.

If Pakistan normalizes with Israel through any kind of diplomatic, cultural or trade exchanges, it will send an unprecedented message to the rest of the Muslim Umma; in fact, to the whole world that Muslims are now willing to coexist in a reality in which injustice, in all of its manifestations is, simply, normal and acceptable.

What kind of moral authority would that make Pakistan, especially as it is leading the fight against the occupation of Kashmir and the perpetual injustices and violence that is experienced daily by millions of Kashmiris?

From a very young age, all Palestinians are reminded that the struggle for Palestine is part and parcel of the larger struggle against the evils of military occupation anywhere in the world, starting with Kashmir. Every Palestinian mosque often ends its Friday sermons with a heartfelt prayer to Allah, to bring to an end the woes of mankind, from Palestine to Kashmir, to Afghanistan, to Iraq, to Syria and so on. At times, this camaraderie is all that Palestinians are left with, as the so-called international community has long-turned its back on the Palestinian people and their seemingly endless tragedy.

But what would Pakistan gain from normalization with Israel, anyway, aside from lofty promises that are likely to be forgotten as soon as the Joe Biden Administration takes over the White House? What did Egypt and Jordan gain from their normalization and diplomatic ties with Israel, over the course of 40 and 26 years, respectively? They are certainly not better off in any way. Since then, the Egyptian pound has been devalued numerous times against the US dollar; it is almost worthless. Jordan, on the other hand, has been reeling under a prolonged economic crisis, one that seems to worsen with time.

Additionally, the geopolitics of the Middle East is in an unprecedented state of flux. Since the seismic American decision to "pivot to Asia" in 2012, its "leadership from behind" in the NATO-led war in Libya and every other major regional event since, it is crystal clear that the United States is no longer the dominant party in the greater Middle East region. With its Asian domain evidently shrinking due to China’s growing economic and political might and outreach and its ‘scramble for Africa’ facing numerous obstacles, the United States is no longer in a position to dictate, neither to Pakistan nor any other country, on how to conduct its foreign policy. The upcoming U.S. administration is likely to be busy for years in a desperate attempt to stave off some of the damage inflicted by the Donald Trump Administration, starting with amending some of its ties with its European and NATO allies.

This is not the time to join yet more American political gambles, lining up Arabs and Muslims on the side of Israel to fight some imagined Iranian threat. On the contrary, this is the time for influential and well-regarded countries like Pakistan to champion their own initiatives, with the help of other peace and justice loving countries, to force Israel to respect international law, to end its military occupation of Palestine and to dismantle its system of racist apartheid. This will certainly garner Pakistan the respect and leadership it deserves as a global Asian and Muslim power.

The Palestinian and Pakistani peoples need each other as vanguards against racism, military occupation and injustice. They must remain united at the forefront of this defining fight, no matter the sacrifices and the pressures. If Pakistan abandons this noble fight, the pain of this loss will be felt most deeply in the heart of every Palestinian, for generations to come.

Pakistan, please do not validate apartheid; do not make military occupation normal.