That time I changed the course of women’s tennis history (nbd) | Mickey Z. 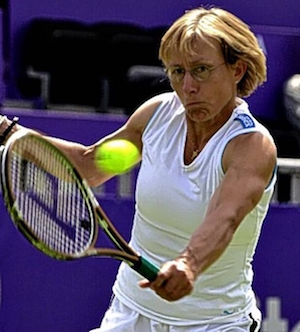 I’ve sometimes gained personal training clients thanks to the ordinary act of correcting a stranger’s workout form. You see, to put it bluntly, at least 90 percent of people I’ve encountered in gyms are essentially clueless when it comes to proper technique.

These folks can negotiate and navigate an expansive range of skills and challenges in the outside world, yet they’re incapable of performing a quality squat within the mirrored confines of your average fitness facility. Therefore, a casual suggestion proffered with the most opportune timing just may result in a symbiotic relationship.

It could also alter the history of women’s tennis.

Road Map-Level Vascularity
Back when Martina Navratilova had made the quantum leap from talented tennis player to enduring sports legend, fate placed her in a health club weight room alongside yours truly. But first, let’s backtrack to my initial encounter with the icon herself.

In the venerable Vertical Club, you’d walk right past one of its several tennis courts to patronize the under-appreciated third floor restaurant. This meant you could peruse top professionals (along with celebs like Mick Jagger and Tom Hanks) plying their craft, up close and personal. When I learned Martina was in the house, I made certain to behold her prowess in action.

I positioned myself near center court and marveled as the fuzzy yellow ball relentlessly rocketed past me -- never more than a few millimeters above the net. Navratilova’s power and control was breathtaking to witness. I felt honored to watch an epochal athlete in her prime, at such close proximity.

After her practice session, Martina and I ended up riding the same elevator to the second floor gym. She’s a lefty and thus, I found myself surreptitiously sneaking peeks at her left forearm. From gripping the racket, it was ballooned to double the size of her right -- not to mention the road map-level vascularity. I queried her about it but she was too modest to flex.

Meanwhile, back in the weight room…
About a half-hour later, I was back on shift in the weight room and… there was Martina. She was preparing to perform some triceps extensions (a rather archaic exercise). The margin of error is larger than expected for such a minor movement, and Martina’s form wasn’t even in the same neighborhood as correct.

It was match point. I knew I had to step up. You know, in the interest of sports and pop culture history and all.

Even if we hadn’t previously met, I would’ve felt calm and assured as I approached Ms. Navratilova. Being a trainer -- and wearing the requisite ill-fitting uniform shirt to prove it -- allows someone like me to engage with someone like her without instantaneously being taken for a cad.

Hence, I ambled over to the tennis champion, reintroduced myself, and utilized Generic Correction Line #1: “May I show you another way to do that?”

This shrewd approach never fails to curtail the likelihood of a defensive retort. You haven’t told anyone they’re wrong; you’re just providing an “alternative.”

As you might have presupposed, Martina was gracious and secured the proper form within seconds. She thus saved herself from a potentially career-ending injury and, yeah… women’s tennis would never be the same. Game. Set. Match.

Just another day in the dumbbell domain.

That time I changed the course of women’s tennis history (nbd) by Mickey Z. is licensed under a Creative Commons Attribution-ShareAlike 4.0 International License.
Based on a work at http://worldnewstrust.com/that-time-i-changed-the-course-of-women-s-tennis-history-nbd-mickey-z.